Going by the name “The Barton Ballers,” the team will compete in the city of Clayton’s recreational league in Shaw Park. It will consist of residents of The Barton, Clayton’s newest apartment complex.

Neighboring CHS, The Barton is currently in its final stages of construction. The construction began in early 2016 and is expected to last until this spring, at which point about 100 of the 229 apartments will open. The rest of the building will be finished in stages, with a full completion expected in June. 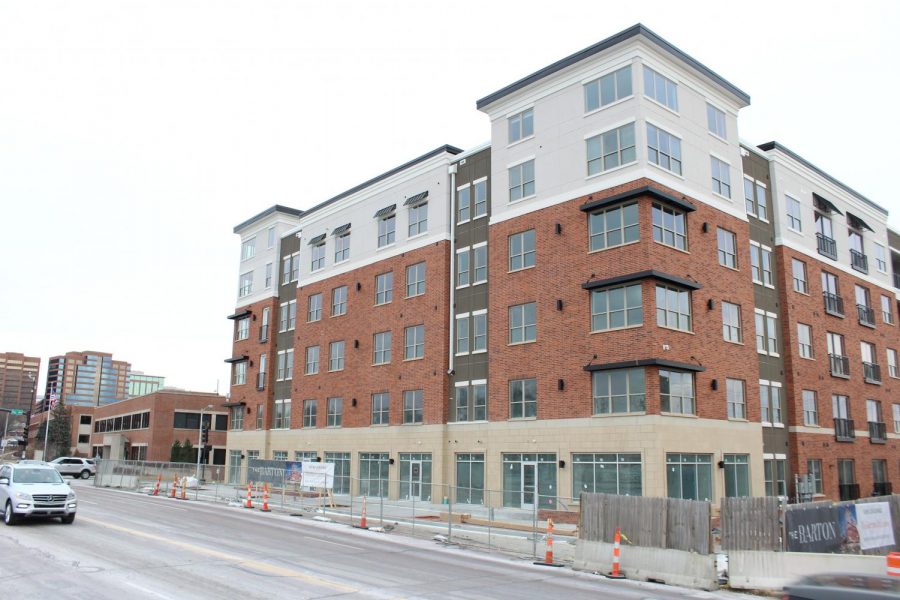 Gallery|2 Photos
Madison Gudmestad
The Barton at its current stage of construction, as of Feb. 5, is almost completely finished on the exterior.

The idea for the complex, however, has existed for much longer. About seven years ago, the process began with ideas, architecture and design, city approval and, finally, breaking ground.

Considered a “mixed-use space”, The Barton will provide three units of retail space as well as its residential offerings. One of these spaces has been leased to The Exercise Coach, a personal training business. The other two have not yet been decided.

“These are not your typical apartments,” said Leasing Manager Christine Whittaker. “People walk in and they feel like they are walking into a million-dollar home as opposed to an apartment.” 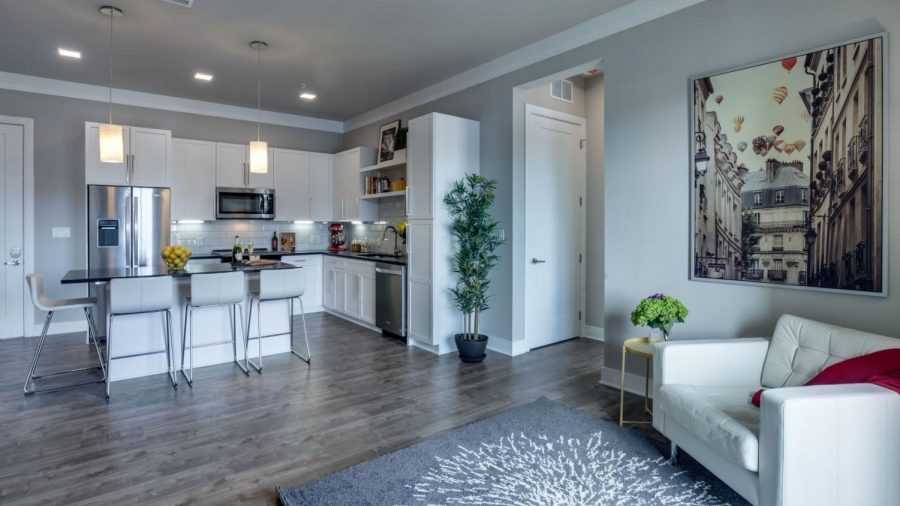 Gallery|4 Photos
This Barton apartment contains a spacious living room with natural lighting that is open to the kitchen. Photo provided by the Barton.

Beyond the high quality apartments―with wood floors, granite countertops, custom shelving and bathroom TVs―the residential amenities also put The Barton a cut above the rest. Everything from a heated saltwater pool to a climate controlled wine cellar helps make this complex more desirable. What distinguishes the Barton from other complexes in Clayton, however, is the sizeable green space surrounding the complex.

“No other apartment community in Clayton has that because they’re more city-like,” said Whittaker. “Having a mid-rise community with all the amenities that we offer in the heart of Clayton is hard to do.”

Additionally, the “resident perks” program provides unique benefits and a closer connection to Clayton than any other apartment complex.

“There’s local businesses that said ‘If you’re a Barton resident, you get a discount at out establishment.’” Whittaker said. “No other place has a resident perks program. That’s definitely us creating a partnership with those businesses.” Among the list of partnering businesses are Giovanni’s Kitchen, Tani Sushi Bistro, Ruth’s Chris Steakhouse and the Curtain Exchange.

Despite having such high-end apartments, The Barton’s renting rates stay relatively inexpensive. 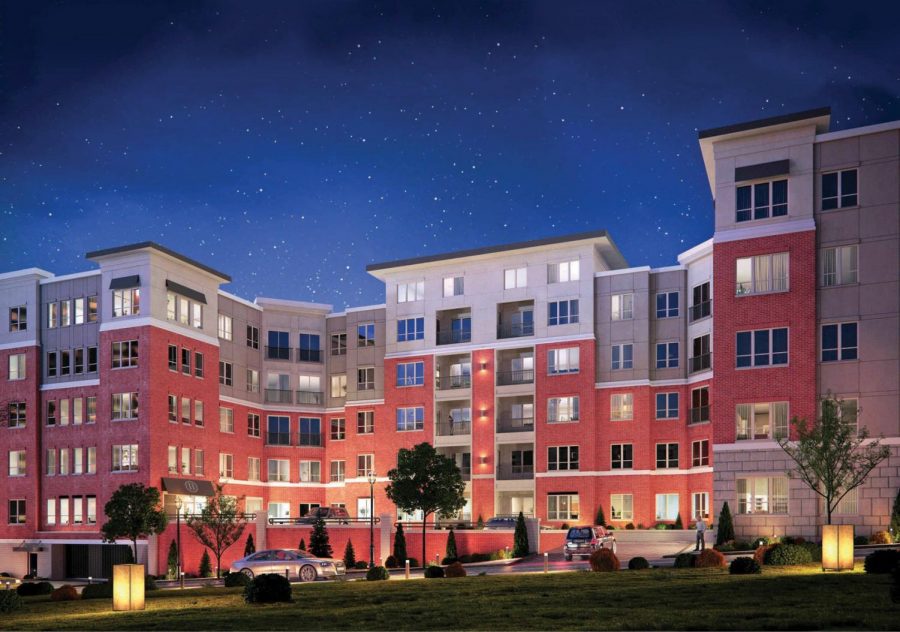 Gallery|3 Photos
The "circle drive" and front entrance to the Barton will face Gay Ave. as shown by this rendering of the building. Visual provided by The Barton.

The Barton shares a unique connection with CHS. In 2016, The Barton sponsored the CHS annual golf tournament, which helps raise money for the CHS athletic department. According to Whittaker, they plan to sponsor it again this year.

The owners of The Barton at Covington Realty are also familiar with the school district. Brian Kennedy, one of the partners with Covington, graduated from CHS himself in 1999.

“My experience [at CHS] really prepared me for college and helped me start my career,” Kennedy said. “It’s amazing to have the Barton so close to the high school.”

This familiarity of the area is what propelled Covington Realty to seek to build the Barton in Clayton.

The apartment building honors their connection to the city of St. Louis in some subtle ways.

“The Barton is actually the blossoming flower of the dogwood tree, which is the Missouri state tree,” said Whittaker. Additionally, each of the floor plan options in the building is named after a St. Louis celebrity. From ‘The Saarinen,’ after the designer of the arch, to ‘The Twain,’ each apartment honors an aspect of the city’s history. 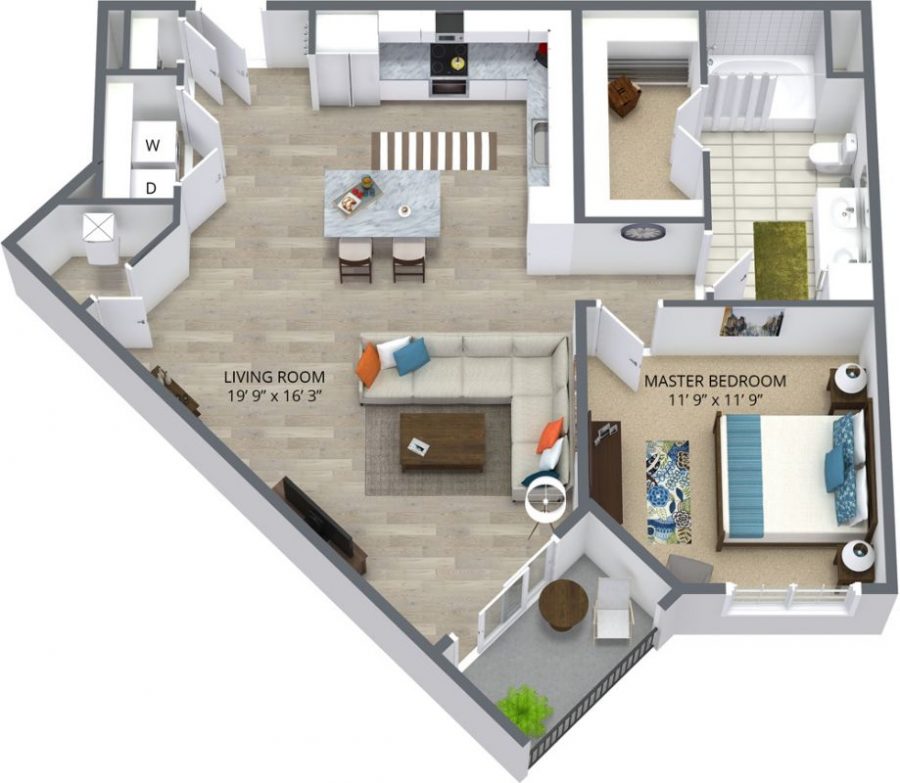 Gallery|3 Photos
The Twain, named after St. Louis writer and celebrity Mark Twain, is one of many 1 bed/1 bath apartment floor plans The Barton has. Graphic provided by The Barton.

According to Whittaker, more than anything else, what The Barton prides itself on is its commitment to the development of its own community of residents. There are plans for community service events and gatherings, similar to what the realty company has done at previous locations.

“There is something about charity work,” Whittaker said. “You’re doing more than just writing a check. It really is getting out into the community and doing those good things.” Clearly this idea of supporting the city has significant influence on The Barton’s goals, shown by their deep involvement in the community.

“We partner with St. Louis-area food banks, and we do food drives,” Whittaker said. “In the holiday season Salvation Army has this awesome thing where you can adopt families, and they tell us the parents age and their [clothing sizes] and the kids age and their sizes, different toys they want, and the whole community comes and signs up for what they want to donate.”

The Barton also plans to assist US troops overseas by hosting drives and sending care packages. In previous locations, the community managers gathered ten boxes worth of supplies and sent them along with handwritten notes from the residents.

Taking their community involvement beyond volunteer service, The Barton will also be partnering with its neighbor across Maryland Ave. ― The Women’s Exchange. By supporting a place which provides immigrants with work experience and a source of income, they hope to contribute to the overall growth of the community.

What guides all of this contribution to Clayton is the basis of what makes living in The Barton different than any competing apartment complex: a “community within a community.”

“Neighbors get to know each other, and off the energy from donating to the Salvation army, they decide to do something a few months later on their own,” said Whittaker. “It’s our residents that help shape it, not just us.”

However, the organized service is not the only form of the Barton community.

From the Barton Ballers to “live/work” entrepreneurs who use the retail space and live nearby in the complex, The Barton hopes to build a special connection between all of its residents.

“If you’re a Barton resident, you get to be a part of that,” said Whittaker. “Part of the perk when you live at the Barton is that you get to be a part of that. We want people to say ‘Hey, I want to live at The Barton. I want to be on the Barton Ballers. I want to help donate and do things with the community.” This exclusive culture, along with the amenities and perks offered by the complex only make it a more desirable location.

Looking to the future, The Barton only hopes to grow what they already have planned to make.

“The world is really a busy place. When you can stop and do something kind for another person, it causes a chain effect. There’s really something to that,” Whittaker said. “We do what we can to help the Clayton community and the greater community. We have 350 people at our disposal. Let’s do some good with them.” 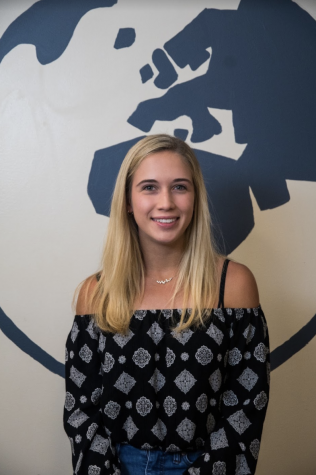 Madison joined Globe because of her love for photography and capturing photos that help to communicate the latest news. If you can't find Madison with a camera, you'll find her...