A look at how the Municipal Opera Theatre is celebrating its 100th season. 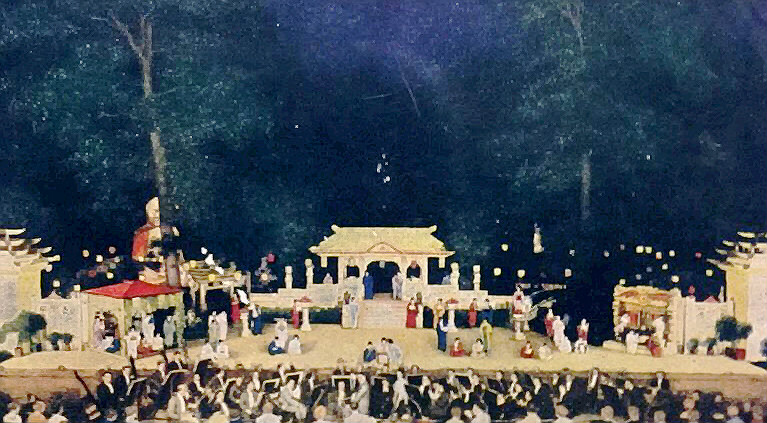 This postcard depicts a 1923 performance at the Muny outdoor theater. Image from Wikimedia Commons.

Singing. Dancing. Crowds. Applause. We all love to spend an evening in Forest Park at the Muny. The St. Louis Municipal Opera theatre is the nation’s oldest and largest outdoor theatre, presenting a total of seven great musicals every summer season.

This summer, the Muny will be celebrating its 100th season. Several special events have been planned before the season begins in order to make this year even more special.

On May 18th, the Muny will be hosting the centennial gala which includes dinner and the show “An Evening With the Stars.” Due to high demand, dinner tickets have already sold out; however, tickets for the show are still available. “An Evening With the Stars” has been created specifically to celebrate the rich and diverse history of musical theatre at the Muny over the past century.

Two days after, on May 20th, the Muny will hold the Centennial Birthday Bash, which will include demonstrations, rides, games, songs and much more. This will take place all over the Muny campus and will be free to the public.

The seven musicals in the summer repertoire from June to August are Jerome Robbins’ Broadway, The Wiz, Singin’ in the Rain, Jersey Boys, Annie, Gypsy and Meet Me in St. Louis. According to Isaacson, it was difficult to decide which seven shows they would be presenting for the Muny’s 100th season.

“I could approach it from a point of view of many factors, one of the factors was celebrating history, but we are also making history. We are the first theater to produce Jersey Boys after its international success. Also, Jerome Robbins’ Broadway has not been performed anywhere since 1990”, Isaacson said.

Isaacson also explained how he wanted to reach back and find shows that were classical to the Muny set. Both Annie and Meet Me in St. Louis have been performed several times before and are definitely great shows for families to come to.

“Then you have something like Gypsy which is hard-to-believe one of the greatest American musicals ever. Then something like The Wiz has not been done in 30 years,” Isaacson said.

This summer several famous actors and actresses will be starring in the Muny shows. Corbin Bleu, mainly known for starring as Chad Danforth in the High School Musical film series, will be the lead in Singin’ in the Rain. Tony Award-winning actress Beth Leavel will be starring in Gypsy. She has been in several previous Muny shows as well, including playing Mrs. Dolly Gallagher in Hello, Dolly! as well as Aunt Eller in Oklahoma!.

This summer there will also be special merchandise sold at the Muny as well as on the website. This includes sweatshirts, T-shirts, a coloring book and a special poster celebrating the 100th season.

Andrew Cross, scenic artist at the Muny, created the “A Day at the Muny” coloring book as well as the 100th season poster.

“I was working on a poster for the Muny that I wanted to give to them. Since I have been working at the Muny for so many years, I decided it would be nice to give them a hand-drawn poster to commemorate the 100th season. The poster is filled with images that you see around the theater and backstage. They were not thinking about making a poster so they really liked the idea. When I was almost finished with the poster I revealed to them that I always thought it would be a lot of fun to make a coloring book. Everybody in the room stopped and said: ‘Oh, you have to do that!’ so I stopped working on the poster and started creating the coloring book”, Cross said.

“A Day at the Muny” includes beautiful drawings depicting artists, actors and designers getting ready for an evening show at the Muny. The book ends with a few coloring pages depicting the start of a Muny show. The coloring book is for sale on the Muny website and will be in the gift shops this summer.

The history museum will also be opening an exhibit June 9th, titled “Muny Memories.” This exhibit will be similar to the St. Louis 250th anniversary exhibit a few years ago, and will include photographs, artifacts and more, all celebrating the Muny’s 100th season.

There are many upcoming events celebrating the Muny’s 100th season: exhibits, shows, dinners, and more.

“I think there’s something here for everybody, no matter who you are”, Isaacson said.