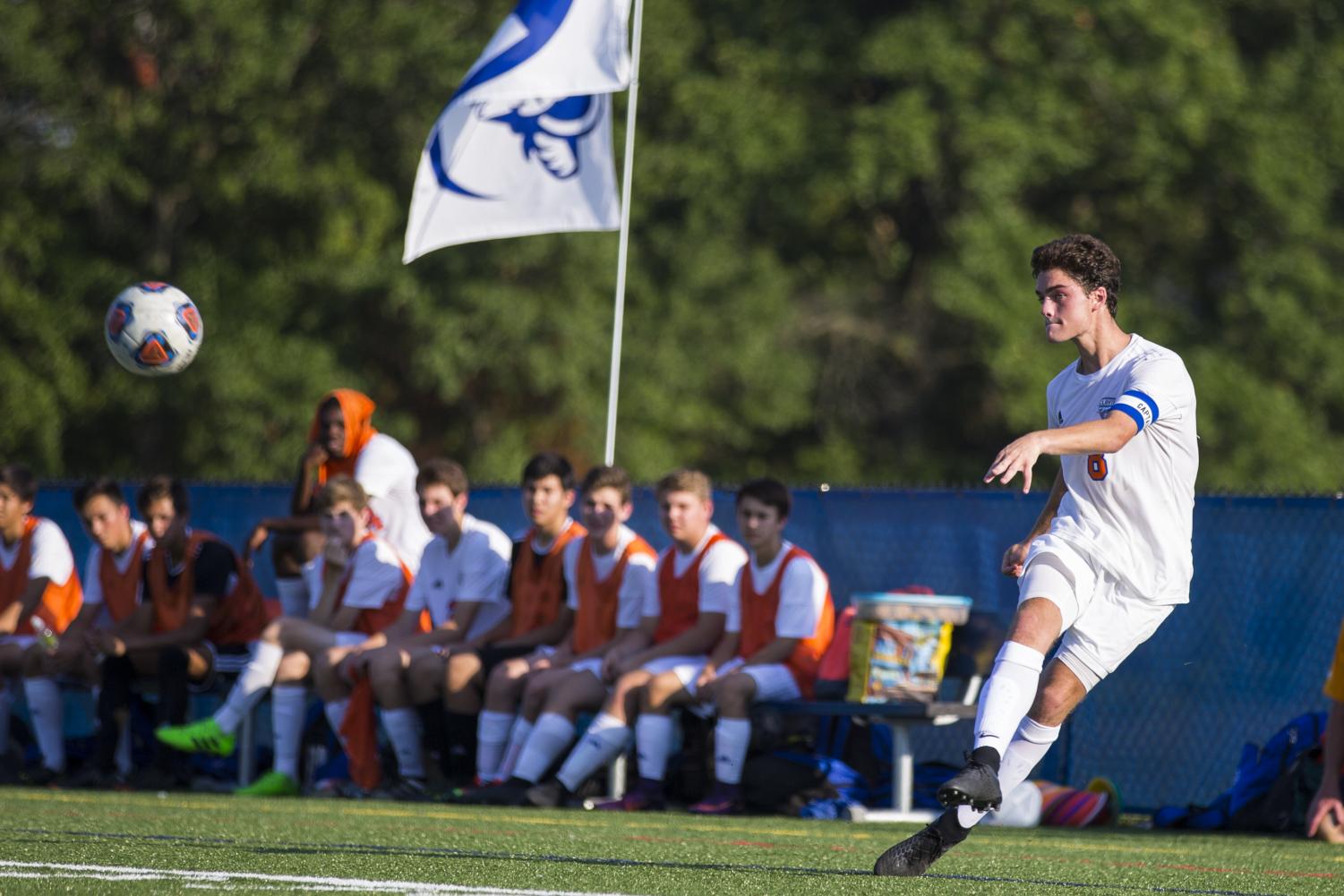 Senior James Dulle, who scored both goals for Clayton, passes the ball to a teammate. (Michael Melinger)

Senior James Dulle, who scored both goals for Clayton, passes the ball to a teammate.

Senior James Dulle scores a last-minute goal to lead the Greyhounds to victory over rival Ladue.

Die-hard Greyhounds and casual spectators alike can rest easy: Clayton athletics are making a comeback. On Monday, Sept. 17 the CHS Boys’ Varsity Soccer team ended its losing streak against district rival Ladue Rams in a 2-1 victory with seconds to spare in extra time.

“Over the course of the full 100 minutes I think we played a nice, balanced soccer game and I’m happy with the win,” varsity head coach Tom Redmond said.

Entering the game with a 6-0 record and 43-3 goal differential, the Greyhounds hoped to continue their promising start to the season. Clayton’s last encounter with Ladue, in the district final at the end of the 2017 season, resulted in a crushing 1-0 loss.

The Hounds started the game strong from the whistle, hungry for redemption. In the first 21 seconds senior Max Boeger was fouled in Ladue’s box, drawing a penalty kick. Senior James Dulle took the kick and netted a goal past the Rams’ keeper, giving Clayton an early 1-0 lead. The Hounds dominated most of the first half but were unable to score again.

The game’s balance shifted in the second half, with the Rams out-possessing the Hounds. Junior Andrew Matheny, Clayton’s goalkeeper, had several key saves to keep the Hounds in the lead. The team had several more opportunities to score but could not capitalize.

With 10 minutes remaining in regular time, Ladue gained possession of the ball and served it into Clayton’s penalty area, scoring an equalizer and drawing the game at 1-1. Both teams fought hard to break the tie by the end of the half, but no further goals were scored.

In the case of a tie at the end of regulation time, two more 10-minute halves are played with a sudden-death victory. If no goals are scored by the end of overtime, the game moves to penalty kicks, where each team sends five players to take shots on the opposing keeper. The team with the most penalty goals wins the game.

The Hounds kicked off extra time with regained momentum and had several close scoring chances. After no goals were netted in the first 10 minutes, the game entered into the second overtime period.

At less than a minute left in the game, it looked like a penalty shoot-out would decide the result. However, with 26 seconds on the clock, Dulle received the ball at the top of the box and smashed it through the Rams’ defense and into the net. Clayton fans and players stormed the field in celebration of the last-minute victory.

“The past seven years we haven’t beat them,” Dulle said. “Every year Ladue has the bigger crowd, coming here thinking they are going to win 2-0 or 3-0, but we fought last year and almost won, and we finally got the victory this year.”

Dulle, a captain on the team, was named co-conference player of the year and first team All-State for class 3 during the 2017 season. He hopes the Hounds continue to extend their seven-win streak and eventually make a run for the state title.

“Clayton is no longer an expected loss against Ladue,” Dulle said. “We’re one of the big dogs now.”