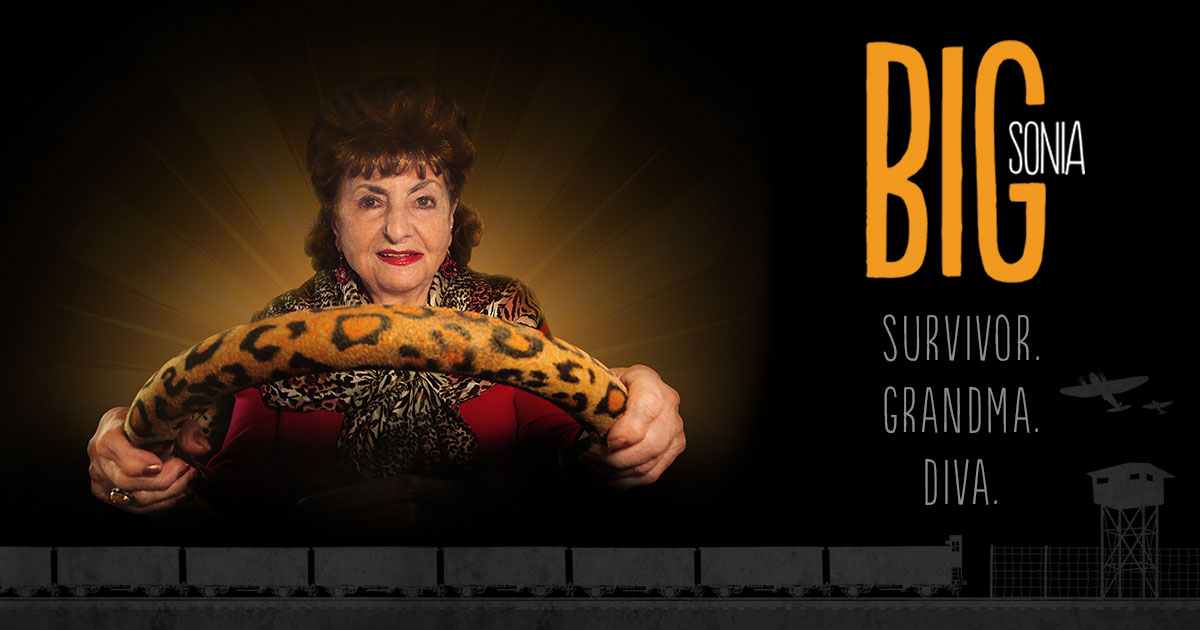 A powerful film about a Holocaust survivor, directed by former Clayton student, screens at CHS

On Thursday, October 4th, director, producer, and Clayton High School class of 1996 alum Leah Warshawski came to visit Clayton and speak with sophomore World/U.S history classes. Later that night, a community screening of “Big Sonia”, a film Warshawski directed, was held at 7 P.M in the CHS auditorium, with a Q&A session that followed. On Wednesday, students watched the 45 minute educational package for the film and came up with questions about it, which were answered at the sessions on Thursday.

The film screened at Webster Unversity a few months ago in early June. Warshawski reached out to Dr. Gutchewsky graduation weekend of the 2017-2018 year asking if he was interested in seeing the film. The two connected over email, and Gutchewsky attended the screening with his wife.

The film itself revolves around Sonia Warshawski, one of the last remaining Holocaust survivors in Kansas City, as well as one of the only survivors there who speaks about her experiences publicly. Sonia has endured unthinkable torture and suffering, beginning the day she watched her mother vanish behind gas chamber doors at age 15. She was shot through the chest on liberation day and miraculously survived. Animated drawings throughout the movie demonstrate Sonia’s personal story. Sonia Warshawski also shares her story with teens and inmates, and has a profound impact on everyone she talks to. Although she is only 4’8″, her giant personality, big heart, and every other aspect make her Big Sonia, a term one of the team members of the movie coined which stuck.

Gutchewsky wasn’t the only one moved by the film: Seattle Times critic Moira MacDonald writes, “Filmed with great respect and palpable love for its subject, ‘Big Sonia’ is one of those documentaries that seems to bring its own light – just like the woman at its center.”

Inspiration for this light-bearing film struck for director Leah Warshawski and her husband Todd Soliday when they realized that within their lifetime, all the survivors would be gone. Added time pressure due to Sonia’s age of 85 motivated them take action.

“Because I’ve been in the film industry for a long time, I honestly felt like Sonia is the kind of character that can actually reach many, many people,” Warshawski said. “Sonia is a woman that regardless of whether you care about the Holocaust or not, if you see her leopard print steering wheel, or her big hair, or you like the shop… she’s so engaging that we couldn’t help ourselves. We knew, if nothing else, she’s a character who can get people to pay attention.”

The film took a total of seven years to make. The most challenging part for the team, as is for any filmmaker, was raising the money. Although finance was an issue, many other challenges were present in the  making of “Big Sonia.” She felt pressure to make her family really proud, as making the film was a much heavier responsibility.

“There’s a lot of added pressure– pressure to finish the film on time, while Sonia’s still alive, so she can be a part of it… pressure to make a really good film, which we did, ultimately, and just… anytime you make a documentary, you’re in charge of telling other people’s stories, and you want to do the stories justice. There’s a lot of anxiety about not doing justice to the story and letting somebody down,” Warshawski said.

Despite the obstacles, there were several high points and rewarding moments throughout the process. Warshawski grew closer to her grandmother than ever in the process of filmmaking, forming a bond which they lacked before.

“We have a relationship now… we had an obligatory relationship before, where we would talk, see each other a couple times a year maybe, because I never lived in Kansas City, but I don’t feel like she knew who I was at all… we just hadn’t spent any time together doing fun things. I’d see her at work, we’d go eat, then she’d want to take us shopping. And that was it. We didn’t have experiences– the film gave us experiences… the whole experience has given us something to bond over,” Warshawski said.

Another high point was finishing the film and premiering it. The premier occured one week after production was finished, the same week as Sonia’s birthday. There was certainly a rewarding feeling that Sonia was able to be there to see the effects of the movie in action, and that the film won 2 awards. It was a culmination of everything the team worked so hard for, and a great experience overall. Sonia was treated like a movie star, and fit quite well into the role. She enjoys being on the big screen as she is anything but camera-shy, unlike other family members who were reluctant to be part of the movie. Although family members were initially resistant to participate in the film, after seeing the end product and the impact it had on others, they were proud to have participated.

“I really felt pressured to do the interviews… but what’s been interesting is that so many people seem to relate to us, because of how her trauma affected us, and all families have problems, or something going on in your life, so it’s been extremely rewarding, which I really wasn’t anticipating,” Sonia’s daughter Regina Kort says in a Q&A.

Sonia’s son, who was at first disinclined with the prospect of being featured in the film, was actually featured in a powerful segment of him crying while reading a poem he wrote about being the child of a Holocaust survivor. This clip moved several audiences, especially those who could relate to the idea of intergenerational trauma, one seen frequently throughout the movie. For Sonia’s granddaughter, her experience growing up differed from others’.

“I always felt like, unique, that we had this history in my family, but also it made me feel really different, and not always in a good way… I always felt kind of embarrassed that I was Jewish, because I only remember a couple of other Jewish people in my class… When you’re in the minority, it’s really tough to feel like you fit in, so I always felt different. And I know my dad, and his sisters felt that way… things felt more serious because of this history,” Warshawski said.

Sonia now has great-grandchildren, who found out about their history from watching the movie when the family decided they were old enough to embrace their painful past. Warshawski herself was always aware of Sonia’s story, but not the details, since it was a topic too painful to ask about. She became more curious; however, as the film process commenced.

Most importantly, “Big Sonia” has deeper messages for any audience and a universal theme that goes beyond Sonia’s story itself. Major takeaways involve the message of love over hate, a message of empathy and compassion, and the idea that you are unaware of what someone is going through until you’ve stepped into their shoes.

“That’s the one thing, no matter where we go, no matter who we screen it for, no matter what you believe in or what your religion is or what your politics are, the one message that everybody gets behind is this message of love over hate. You can’t deny that we could all use more love and kindness, and that’s really the biggest message we want people to take from the film,” Warshawski said.

The film is designed to be accessible to younger audiences, and reach a wide audience. The animations are a distinguishing feature that differentiates “Big Sonia” from other Holocaust films, as most will use black and white videos during the time period. The drawings could also resemble something Sonia herself might doodle.

“From the beginning, we wanted to do something different, we wanted to not go the typical archival footage route, and reach perhaps a younger audience in a different way. We felt also that Sonia is such a vivid storyteller, you almost don’t need a picture the way she describes some things, but to have her horrible experiences and kind of silly, funny experiences seen and reenacted in a way that are her childhood memories would be more powerful than seeing disconnected history images, it’s her history and her storytelling,” co-director and husband Todd Soliday said.

Overall, the film strives to be funny, engaging, and affect a much younger audience than most Holocaust films can. Although Warshawski and Soliday are working on new projects currently that do not relate to the Holocaust, Big Sonia’s journey is far from over. They are both still working to reach students, marketing and promoting it to schools all over the U.S. They’ve had more than 200 community screenings for the film in two years. Ironically, St. Louis has been the most difficult place to get screenings, and it will be the last big theater the team will do. Warshawski knew when they got it to St. Louis, Clayton had to be involved.

“In general, Clayton is really respectful and they know that they’re supposed to be paying attention and it feels good as a speaker, like as somebody who’s coming in to talk about your own family and to talk about something that’s not comfortable, and making yourself vulnerable… it’s really difficult. It helps when people are respectful, it helps when people ask questions,” Warshawski said.

Gutchewsky also believes the film was a learning experience. The screening marks the inaugural Clayton Filmmakers Showcase, which he hopes will become an annual Homecoming tradition. It adds an educational aspect to the bustling spirit filled week, and he hopes it connects the community in another way, especially to those who aren’t as interested in the parade or football game. He’s aware there’s other former Clayton students who have delved into the film industry, and hopes to invite them as well. As for choosing to screen “Big Sonia” at CHS, he feels it’s an important tale for members to listen to.

“I think it’s important that we remember those stories and we hear those stories, and I think the reason that we picked the sophomores too is because they study World War II, and that’s part of the curriculum… it’s a very important example but it’s a very real example… on a local level, it really personalizes the story. Just her grit and her compassion and what she demonstrated through her life is a good story for all of us.”