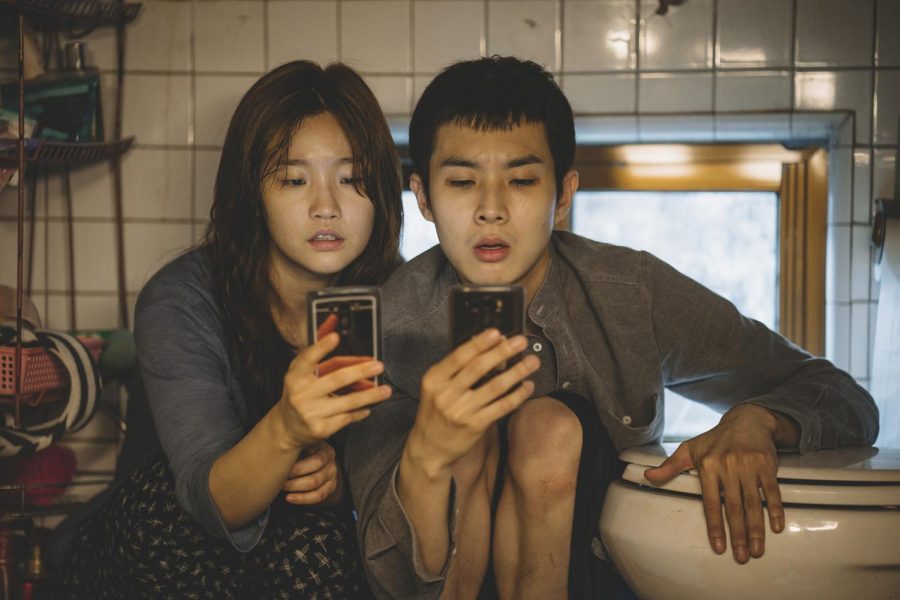 In a few words, “Parasite” can be described as a wild ride. Quite possibly one of the best movies I have ever watched, “Parasite” left me thoroughly shocked and unsettled.

“Parasite” was directed by Bong Joon-ho and starred Song Kang-ho, Lee Sun-kyun, Cho Yeo-jeong, Choi Woo-shik and Park So-dam. Premiering at 2019 Cannes Film Festival, the film went on to win the Palme d’Or by unanimous vote, the first time in 6 years. It was also the first Korean film to win the award.

Set in Korea, the movie follows a family living in poverty and their latching on to a wealthy family. Kim Ki-woo fakes his credentials as a college student and becomes an English tutor for the daughter of the Parks. Slowly, Ki-woo’s sister and parents begin to trick the Park family and work for them as an art therapist tutor, driver and housekeeper.

The plot of “Parasite” was a literal jaw dropper. Wikipedia categorized the film as both black comedy and thriller, and the film fully fulfills both at the same time. Although there are a number of twists and scares within the movie, “Parasite”’s biggest tension comes from wondering if the Kims will be caught in their trick.

Furthermore, the subtle details of “Parasite” expand the depth of the film. In the opening scene, the Kims, who reside in a shabby half-basement, keep their windows open while the streets are being fumigated in order to get “free extermination”. This strange but understandable action might be justified; however, the family is working to put together pizza boxes, which are distributed to others outside their family. The message is clear: small actions driven by your own desires can end up harming many others.

Though all these aspects added to the movie, the most awe-inspiring parts of “Parasite” were the themes that emerged. The film highlights the class divide in South Korea, which is a topic that people all over the world can relate to. The Kims, who are in the bottom percentage of society, figuratively and literally live beneath the Parks, who are a part of the wealthy upper class. The Kim family, among others, spend the movie attempting to climb the stairs to riches and success. “Parasite” is a movie that you will ponder for days after. There are many parts of the film that I would like to discuss; however, they would provide spoilers to hopeful viewers.

Overall, “Parasite” was an exciting movie that kept me on the edge of my seat. While the movie is definitely not for everyone, I would recommend “Parasite” to those looking for a thought-invoking thriller.