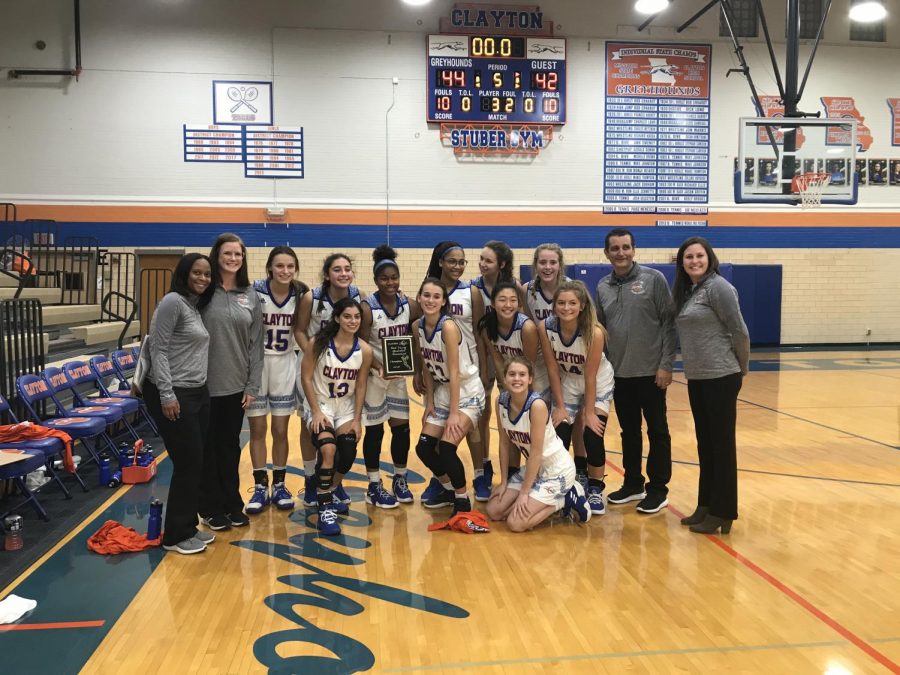 The Girls’ Varsity Basketball team poses for a photo with their victory plaque.

With the seconds ticking down in the second quarter, Ritenour steals the ball for a fast break down the court. With little time to adjust, it seemed as though Ritenour would have an easy layup, suddenly, senior captain, Sara Litteken flashes down the court, sets her feet, executing a perfect set up for a charge.

“Charge!” yells the referee as the crowd erupts in cheers, another defensive play well executed.
By the end of the game, Clayton High School’s Varsity girls’ basketball team dominated Ritenour High School, 53-15. The crowd was cheering, astonished at another astounding win. The lady hounds kicked off the season on Monday, December 2nd, the taking on STEAM Academy and winning 40-8. So, what is the secret behind this great wins? Sophomore, Izzy Ross says it’s the new predator mentality.

“Predator mentality is the mantra of this season for us. The idea is to go out there and defend and protect our home court and attack away courts,” Ross said. “This mentality is meant to stay in the back of our minds with every play, move made, shot taken, etcetera.”

Keeping predator mentality in mind, the team ran an aggressive defense preventing both teams from making more than eight baskets.

“I think we have all improved individually a lot from last season… our defense is much better than last year, now. I think we really played great defense this game,” Litteken said.

Both Ross and Litteken contribute the wins to becoming more familiar with one another. Last year the hounds won the District Championship with a lot of new faces added to the team. This year, Ross hopes, “to continue to get to know everyone on the team.” The team has high hopes for this year and hope to gain some support.

“I think we’re all really excited for the Ladue game and working towards some big wins,” said Litteken.
Last night the Lady Hounds took on McCluer North with a tight game. With 13 seconds left on the clock, Greyhounds were in the lead 37-36 after a foul shot made by, senior captain, Ruby Gallegos. McCluer North was then fouled and up to the line. By the end of the fourth quarter, the game was tied 38-38.
With 2.2 seconds left in overtime (an additional four minutes added onto the game), Littiken passes the ball into Ross, with a blocked layup by Ross, Gallegos gets the rebound shoots and scores, winning the game 44-42.

”We fought hard, weathered the storms,” said head coach, Michaell Knight. “We persevered and worked hard.” Litteken and Gallegos led the way scoring 12 and 10 points, respectively.
Athletic Director, Steve Hudson is proud of the girls’ effort and hopes to get more students to come to the games, “Once all the students get [the new app] on their phone they will have a bigger incentive to come to games, not only girls basketball but boys basketball, girls swimming, wrestling, and everything else… just to get people in the door and excited about Clayton sports.”

The girls won the tournament this week and hope to continue persevering throughout the season.
“We are not the best we are going to be right now, and I want us to be that come February,” said Knight.
The Lady Hounds take on Pattonville High School next week on Monday December 9th at 6 pm in Stuber Gym.