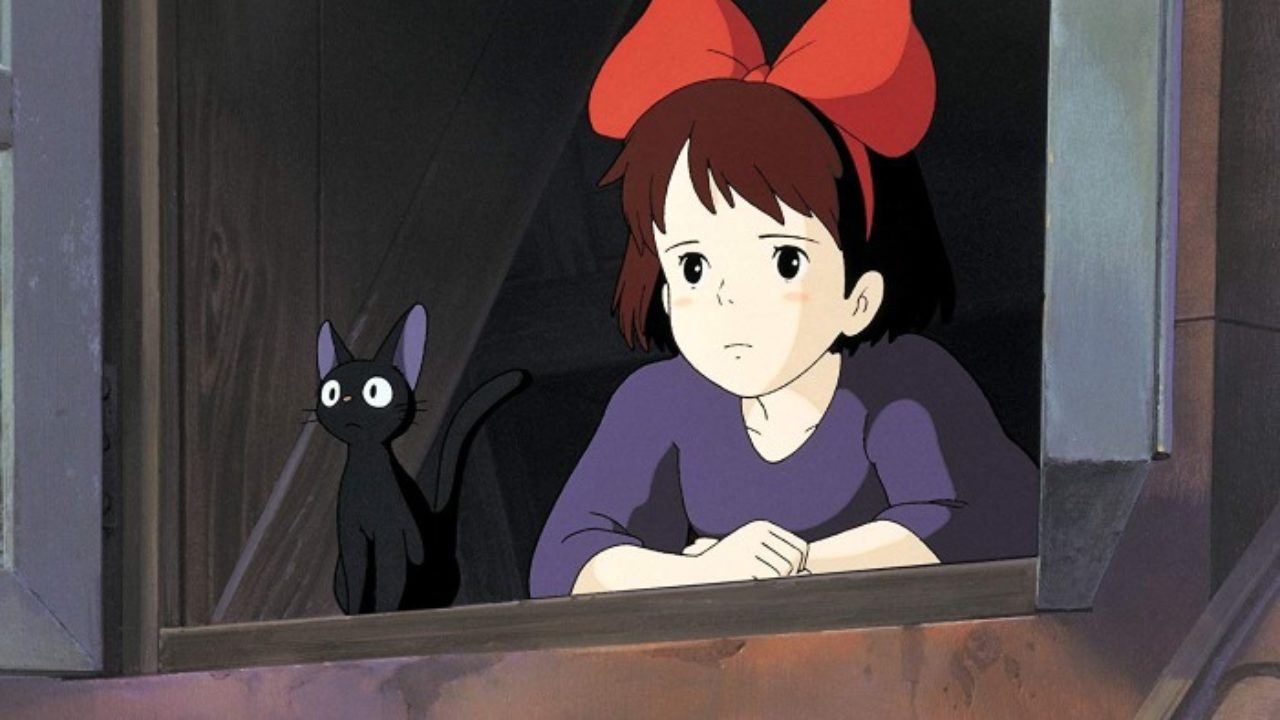 Kiki’s Delivery Service is another popular Studio Ghibli Film about a 13-year-old witch who moves to a seaside town with her cat, Jiji. Completely alone in a new place (as per a witch tradition) for a year, she tries to master flying on a broom by setting up a delivery service with the lady who runs the bakery she’s staying in. As she delivers packages she makes new friends, including an artist who lives alone in the woods names Ursula and and old lady named Madame who makes Kiki a cake for her birthday. During her journey, her insecurity gets the best of her and she loses her ability to properly do magic, and has to over come her insecurities to regain her powers back. It has a high rating on most sites, but does this movie live up to it?

Visuals/Animation: 9/10
The color choices of this movie are amazing. Although Kiki moves to a bustling city, since she’s often flying around there’s a lot of greenery that Ghibli does an wonderful job of drawing. As usual, things like trees and and bushes are in a slightly different style, looking more like paintings than animations, which creates this really cool mixed media-esque look. The shades of green that are used are beautiful and add so much depth to each scene where Kiki is surrounded by nature.

Focusing on the animation, I love the way they animate Kiki when she starts flying. Her dress starts to wave up around her in huge wooshes like Marilyn Monroe’s dress (but slightly more family friendly) and her hair blows everywhere. It really looks like she’s about to fly in a magic broom and do her witch thing. The same thing happens during one of the most action packed scene where Kiki goes on a bike ride with Tombo (a boy who she met when she first moved to the new city ). They’re speeding down high ways and through parks and every time you see a full shot of both of them, there it is, Kiki’s dress flying everywhere. It looks so cool and makes all those scenes feel so much more lively because if the additional movement

The prettiest scene is when Ursula (the artist Kiki meets in the woods) shows Kiki the paining of her she did. The painting is so elegant, and in an art style more akin to Picasso and other abstract artist rather than the normal anime of Ghibli. There’s so much detail in every part of Ursula’s painting.The colors, the style, it’s all exquisite.

Plot: 9/10
Plot-wise, Kiki’s Delivery Service isn’t too bad, There’s not one big plot like in Ponyo, but there are small storylines like in My Neighbor Totoro (that are more thought out and have actual weight, rather than 2 sisters running around in the forest). Once again, similar to Ponyo, there’s the history of the character/world snuck in, you get t hear about witch traditions and how magic works in the beginning before Kiki leaves for her home town, but it doesn’t feel like a lecture or a story; it feels like a conversation between two characters.

One of the bigger, more important plot lines has a base in Kiki’s insecurity as a witch, booth in hermagic and compared to other girls in her town. Plots and problems centered around teenage insecurities in media often glorify insecurities in an odd way. They don’t tell kids they should be insecure, but there’s a tendency to have this sort of braggy air around not feeling good or pretty enough. Kiki’s Delivery Service doesn’t do this. Instead, they have an older, wiser character help her through her issues while giving important lesson to the audience, rather than Kiki going “Oh look at me I’m so sad and special because I’m sad!”. They make Kiki special because she has magic.

At the end though, it does get a little over the top, with Tombo getting caught on a blimp in the air and almost falling to his death, only to be saved by Kiki when she gets her magic back. This is strangely fitting for Kiki’s Delivery Service, however. Ghibli movies usually go from zero to a hundred very quickly, like Howl’s Moving Castle ending in a war with a bird man, Ponyo ending with all of Japan flooded and Ponyo almost dying; it’s just how Ghibli makes movies.

Soundtrack/Audio: 8.5/10
The music Kiki’s Delivery Service isn’t that stand-out, but it’s still good. It’s a nice mix of upbeat and modern pop vibes, but theres’ still that classic Ghibli vibe with every song. My personal favorite was the song that Kiki played on her radio when she left her home town. Jiji turns on the radio and you get the spunky song that sets the mood for Kiki’s entire journey. The song title is “Rouge No Dengon” and it’s a funky song that lets you get a better grasp the nature of Kiki: a young girl who is trying to have fun, as well as find the balance of tradition and the new.
Voice acting-wise, I enjoyed it! Of course, I watched the English dub, so I won’t be able to speak on the Japanese voices, but I loved the actress they chose to voice Kiki (Kristen Dunst). The voice that threw me off the most was Jiji’s. It’s nothing against the voice actor, but with the way Jiji acts and the tone of his words makes him come off really sleazy sometimes especially with how he has his own little story of getting a cat girlfriend. The sound effects of the city and other animals (and Jiji when he loses his ability to speak and the cows) are really nice, however.

Characters/Character Design: 8/10
Something this movie did really well was make the characters seem their age. Kiki is a 13 year old girl, and she acts like a 13 year old girl, rather than a high school senior that’s seen the depths of hell or a 8 year old who’s been locked in a tower for their entire life, as so many movies make teens act. It’s refreshing to see a 13 year old in a movie have the same struggles (though they may be on a higher scale) as other 13 year olds; things like having trouble settling in a new environment, or worrying a bit too much about how you look.

Visually, characters were designed in a lovely way too. Every character ad simple designs that would make it easy to tell who’s who and what their character is like, with Kiki’s iconic dark blue dress and bright red bow show she’s more simple and traditional; obviously contrasting with Tombo’s glasses, vibrant hair and loud personality. The simple design of the characters is really nice, though it can make the movie boring in some aspects. When watching the characters interact in scenes with minimal movement, there’s not lot going on visually, which can make the movie seem boring.The simple design makes it easy to watch though.

Atmosphere: 8/10
Kiki’s Delivery Service is a movie full of character growth. As you watch Kiki grow, there’s this homey feeling that surrounds you. With almost every mistake or mishap Kiki gets into, she’s treated with kindness. She isn’t made fun of, she isn’t ridiculed, she’s just allowed to mess up. It’s nice to see a person make mistakes and learn from them without being treated horribly. A welcoming, comforting environment is set up around Kiki as she grows as a person and as a witch. That environment, while not identical, is set up around the view. Watching the movie just makes you feel happy and carries an air of whimsical youth that’s hard to replicate outside of animation.

Total: 42.5/50 (85%)
Kiki’s Delivery Service is a great movie, but it’s not as memorable as other Ghibli movies. There’s both not enough going on and too much going on at once to be able to remember and fully process it. It’s an adorable movie though, with messages showing up here and there that are amazing. Like when Ursula compares Kiki losing her magic to an artist struggling with art block, or a writer with writer block. It makes you view creation based hobbies as magic, which makes what ever you create seem so much more powerful. It’s a nice reminder that even if you’re unhappy with whatever your creating, you still made it, and that makes it magical.
If you’re in the mood for a magical coming of age movie this would be one of your best options. You actually get to see the character grow, and she has a fun cat along with her so you get to see a cute anime-esque girl and a cool looking cat so there’s nothing to lose.