COVID-19 ignites a fear in parents of young children 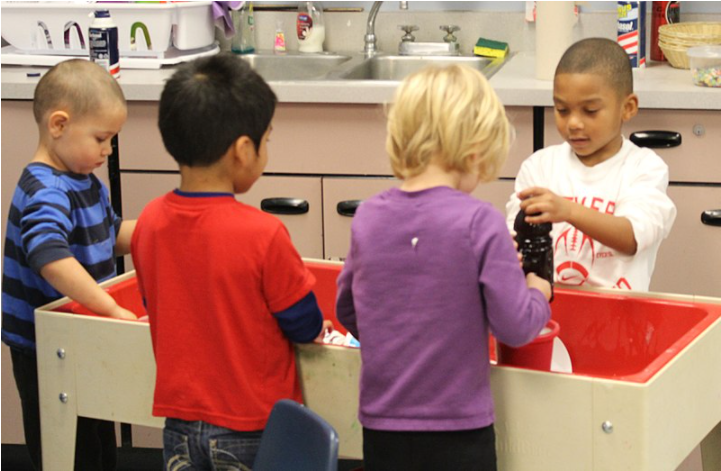 Children play in a preschool before COVID-19

Earlier this year, Miles Faluda learned he was not the only baby in the world. Miles, born in January of 2020, is nearing his second birthday, yet has only recently met someone his own age for the first time. Like many other parents, his mother, Julie Schenker, has spent the past year wondering how the lack of socialization may affect her child. Up until recently, her child barely knew that a world outside their home existed.
“It was very interesting after people started getting vaccinated and felt more comfortable getting closer to him, because he really was not happy about that,” Schenker says. “He was very used to waving to people from a distance, but as soon as people started getting closer he definitely became more clingy.” Schenker is not alone in feeling this way about her child. Many parents have observed their babies becoming more skittish, and even going so far as to screaming when approached by a new person.
Thankfully, Miles’ newfound anxiety is not as severe. Schenker says that Miles is wary of letting new people hold him. “He’ll look at me or Kolade [Faluda, Miles’ father] and make sure we approve, we know this person… but he’ll cry if we try to leave him alone with this new person,” Schenker explains as she cuts up watermelon for her son.
When asked if Miles’ has trouble with facial expressions, Schenker is quick to respond, “Not at all.” During COVID, it has been observed that many kids are having more trouble understanding and interacting with people who have their masks on as opposed to people that don’t. The presence of masks negatively impacts kids’ own facial expressions, as well as their ability to stay focused on the speaker.
Speech language pathologist Casey Stallings is deeply concerned about the effect this may have on the kids in the future. “Facial expressions are considered non-verbal communication,” Stallings explains, “and I think that masks have impacted kids’ abilities to understand what the other person is communicating to them in a non-verbal way. You can’t see somebody smiling, you can’t see somebody frowning, you can just see their eyeballs. You don’t know how to react to them.”
Much to the relief of Schenker, Miles seems to have no trouble with this at all. “But when you think about it, that’s all he knows,” she says. “So the way that he’s learned language development is based on, you know, people wearing masks.”
Most infants recognize faces by 3-6 months, and Miles was right in that zone, which Schenker largely credits to Facetiming her parents consistently every Sunday. His facial expressions, which babies typically start showing at around 0-3 months, also showed up right on time. When asked about her child’s affect, Schenker replies, “I think you can see a lot in the eyes, and I think these [COVID babies] are learning a lot from verbal cues and facial cues other than just the mouth.” She grins at her son, who beams back at her, watermelon dripping down his chin.

I think you can see a lot in the eyes, and I think these [COVID babies] are learning a lot from verbal cues and facial cues other than just the mouth.”

However, physical interactions, like waving and high-fives, were learned much more recently. Schenker describes Miles’ confusion at these actions, saying that people were shocked when he didn’t reciprocate their movements. “For a long time, I was like… he doesn’t know how to do that.” Miles catches on pretty quickly though, and can process conversations, even cutting in to let out an overjoyed “High five!” proud that he now understands the concept.
According to Schenker, Miles has been putting his new skills into practice at daycare, which he started attending about three weeks ago. When it comes to interacting with the new kids, Schenker says, “I will say he is an observer. He will wave, but he won’t jump in and join a group of kids.” She admits she is a bit worried about his reluctance to connect with these other children, but says that with the amount of time he spends at daycare each day (9 hours), she is confident he will socialize soon.
Dropoff, she says, is difficult. Miles is driven by her husband, Kolade, each day, so while Schenker never sees his reaction for herself, she says her husband tells her that it is “rough. He drops him off, and Miles just… cries.” Aside from Miles’ attachment struggles, Schenker is incredibly happy to have a son who came out strong and healthy after months of isolation. “I’m so grateful his development so far hasn’t really been affected, especially now that he’s in daycare and getting the socialization he needs.”

Miles is a case of a child who has thrived during COVID, and seemingly has had no alarming setbacks in his social development. However, not all of the kids in Miles’ age zone have come out as successful as he has. Casey Stallings, a speech language pathologist, has been frequently working with a kid whose progress with social development could not be more different than Miles’. As this child nears his third birthday, Stallings states that he is “not able to do what we want a child to be able to do by the age of three.” She says he struggles with focusing on her, as well as children his own age.
Stallings is distraught with how masks have impacted her ability to help children. “They can’t see how my mouth is moving and I can’t see how their mouths are moving, so I can’t instruct them how I want to instruct them, and how I need to instruct them.”
The three-year-old boy she is currently working with has just started preschool, but has struggled to learn any pre-academic basic skills. “He should be learning social cues, he should be learning shapes, he should be learning numbers…” Stallings trails off. When asked if she believes this is because of COVID or because the child is possibly not neurotypical, she immediately responds, “It’s definitely because of COVID.”
The child struggles to communicate with others, because he has lacked the ability to learn what Stallings calls “mirroring.” Throughout COVID, toddlers and babies have not been able to see the lower half of peoples’ faces, and have therefore not been able to “mirror” or mimic their expressions. Stallings says now that people have gotten vaccinated, many children — along with her patient — are starting to learn some basic social skills, as well as becoming more expressive.
While this is a relief to Stallings, she is still not convinced this is the end of it. “I think the babies and the toddlers now… we’re not gonna know for a couple of years, how it has impacted them. You know, whether or not they have troubles with their peers, troubles with attention, troubles with problem solving, trouble with being independent.”
She sighs. “I don’t think we’re gonna know for a while.”

About the Contributor
Chloe Wolfe, Reporter

Chloe Wolfe is a sophomore and reporter at Clayton High school. She plays varsity soccer for Clayton and is going on her fifth year with her club team. Growing up, Chloe has always...