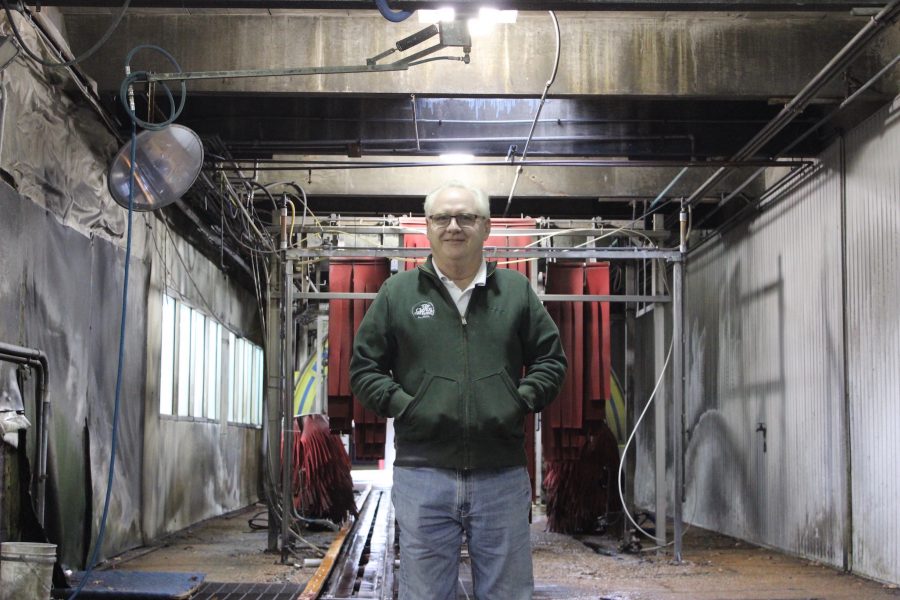 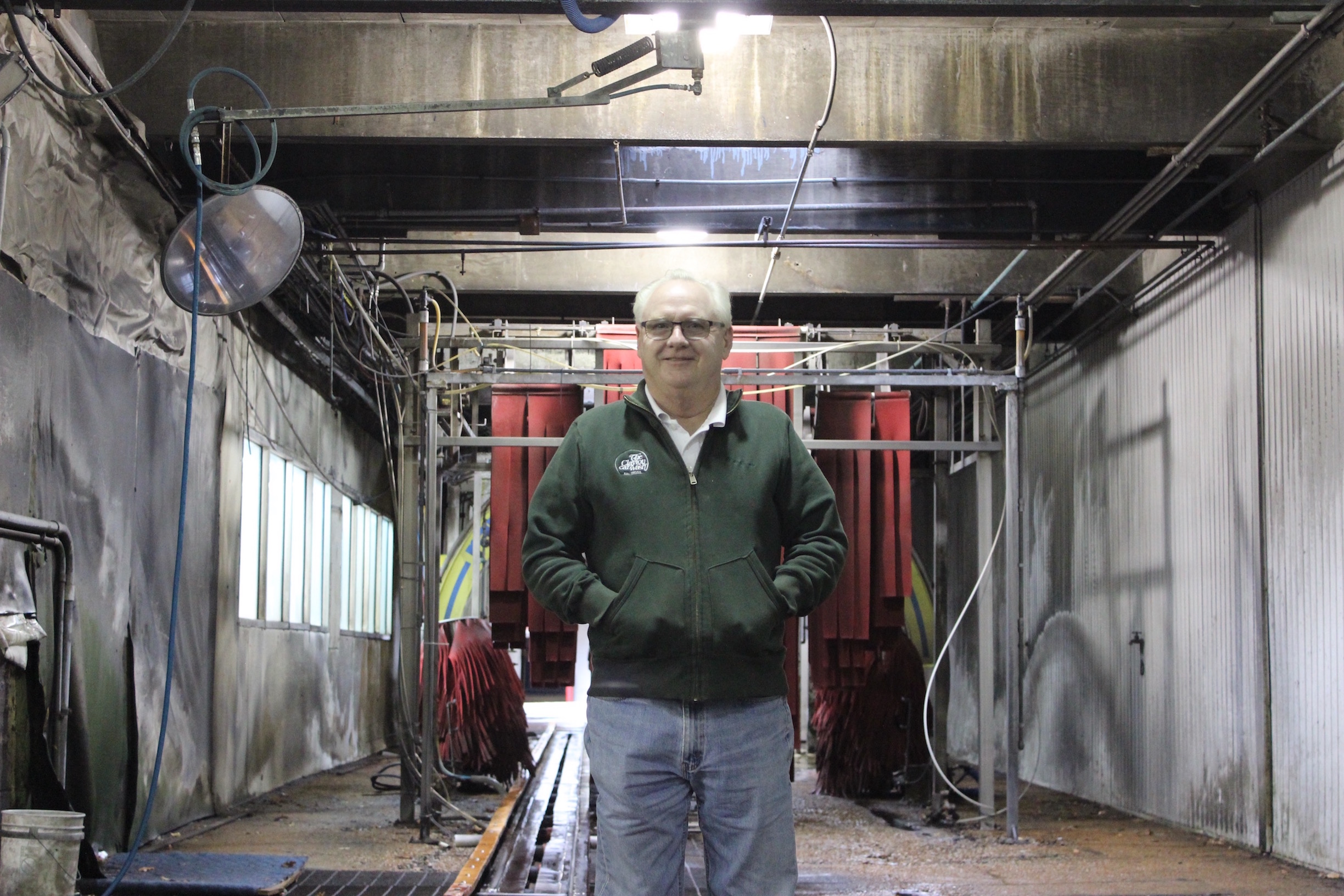 Beneath the towering architecture of Clayton’s large business corporation, on the intersection of Hanley Road and Carondelet Avenue, sits a small yet significant piece of St. Louis History: the Clayton Car Wash.

The historic location was founded in 1954. Rich Rutledge, the current owner of 30 years, has been with this monumental location for his whole life.

“My wife’s family started [the business],” Rutledge said. “I did work here when I was dating my wife as a teenager. I’ve worked here [since] the late 60’s.”  However, after his teen years, Rutledge stepped away from the business for 30 years.

Rutledge has been able to witness the evolvement of Clayton’s city layout through his years working in the weathered building.

“When the carwash started, Clayton had a three story limit on the height of buildings. When we built this, there were still homes behind us,” Rutledge said. “Right across the street was a Cadillac dealership. [There] was all sorts of vibrant stuff going on, not like today.”

To Rutledge, the main goal of the wash is to grow the operation and keep it in the family business.  Rutledge, who is always looking for new employees, keeps a sign out front and trusts word-of-mouth to get new hands in the shop. A large portion of the applicants that come to Rutledge looking for a job are former convicts. To the owner, this is a blessing in disguise.

“They generally turn out to be fairly decent employees,” Rutledge said. “They tend to be more reliable than a lot of people from the inner city because they need a second chance. They have to work. Otherwise, they may as well go back to jail.” 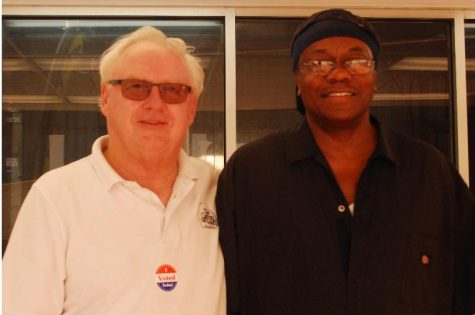 Through the blemished door of the worn down car wash works Stanley, one of the six remaining employees in the historic spot.

“[Stanley] does what we tell him to,” Rutledge said. “He can drive, he can vacuum, he can greet. He can do just about any job.”

Stanley’s shimmering personality is just enough to spark up a conversation with any customer.  His kind instincts have even gotten him job offers from higher paying jobs in Clayton.

“One customer came in and I found $2 grand in his car that he forgot about. He owns two businesses,” Stanley said.  “When [a man] has a lot of his mind like that he tends to forget $2 grand. I turned it in and he was grateful. He tried to hire me right then and there.”

Stanley declined the offer. However, for his good Samaritan actions, the generous restaurant owner granted Stanley pasta for life. Stanley has also found jewelry, guns and even marijuana in the automobiles–all of which he returned to their rightful owners.

Stanley is not only a versatile tool in the car wash. The polymath is also an experienced singer. When he was growing up, Stanley sang in a band by the name of “Switch”. Now, Stanley solely sings to help put the staff in a cheerful mood in the mornings.

Stanley was raised in California by who parents who are both legally deaf.  From birth, Stanley was immersed in the world of sign language, a tool he would need to quickly learn in order to communicate with his parents. Stanley is also fluent in Spanish, which he learned in school.

“I just like to learn different languages,” Stanley said. “I’ve surprised a lot of people because I [speak] so fluently.”

According to Stanley, you can make more money as a sign language interpreter than he does at his current job. However, he stays dedicated to the car wash.

“I have run into customers that are deaf,” Stanley said. “We hired a deaf mute that I was able to translate. He was working there for a long time.”

This employee has moved on from the car wash, but Stanley is still grateful for the opportunity of being able to give back to this man by helping him feel comfortable in the work environment.

Throughout his time working at this wash, the salary of Stanley has decreased substantially.

“Since the recession, [my pay] has decreased because the volume [of customers] has [decreased],” Stanley said. “Back in the day I was able to work 66 hours a week consistently. That has dropped dramatically.”

Stanley relies on this job to pay the bills. However, he doesn’t let a decrease in pay get him down.

“You gotta learn to adapt and keep trying to hope that things will get better,” Stanley said.

Stanley feels that the workers at the carwash share a special connection; one that is cherished tremendously by each individual in the aged building. The few workers each share a community bond that is too strong to be broken.

“We try to stay cheerful here,” Stanley said. “We recently lost a real good co-worker. He passed [away] a couple days ago. Everybody is down in the dumps about that. I was really close to him.”  Even though the employee was quite old and suffered from many health problems, the sudden death has left a dent in the grieving staff.

When Stanley has a problem–emotionally, physically or financially–he knows he can turn to Rutledge, the caring front runner of the operation.

“I can talk to [Rutledge] pretty much about anything. He’s a good boss,” Stanley said. “He has helped me out in a lot of situations back in the day.”

Even though this prosperous business has been around for multiple decades, Rutledge recognizes that he that the Clayton Carwash will not sit in its stop for eternity.

“In lieu of what’s going on around Clayton and if somebody comes in and gives me a big sack of cash I’ll leave. However, I do want to stay,” Rutledge said. “With Centene buying up everything in the world, you don’t know what’s going to happen.”