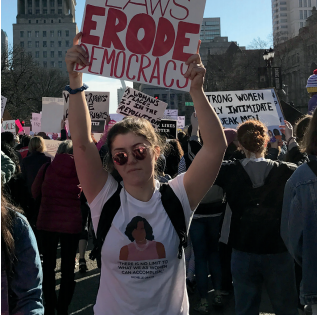 The 2015 CHS graduate hopes to pursue a career in politics

“Kent, my old basketball coach [at CHS], used to say, ‘Play with a chip on your shoulder.’ I knew what it meant, but I never truly understood internally what it meant until the election,” Reeves Oyster, CHS graduate of the class of 2015, said.
By election, Oyster means the 2016 presidential election of Donald Trump, which she has grappled with since November.
“To have watched Hillary [Clinton] work so hard and to have been so prepared and experienced and for it to be stripped from her, I remember saying, ‘Okay. Let’s get to work. It’s time to play with a chip on my shoulder, to play like I’ve got something to prove.’ I think women and a lot of people do now in this time and age,” she said.
Over the past several months, Oyster has used her multiple social media platforms to take a stand about her beliefs, to educate herself and others by reading and sharing articles, and to voice her concerns about the current government, especially the choices and beliefs of the Trump administration.
Oyster is particularly concerned with the future of the environment and public education under the current presidential administration, as well as the future of single mothers in the shifting dynamic in American politics and culture.
Shortly after the election, she took to Facebook to address the ongoing struggle of single mothers in America, writing, “My heart is mourning for other single mothers across this nation – especially those whose intersecting lines of oppression have pushed them so far into a corner that they do not have the power to demand the space for their voices to be heard.”
Oyster’s actions as an activist stem beyond the walls of social media.
She has participated in many protests in the St. Louis area since the election of Donald Trump.
Additionally, she often calls both of Missouri’s senators, as she believes it is essential for citizens to use available resources to speak with their representatives.
“I don’t call Claire McCaskill that much because I am usually in line with where she stands. But I have called Roy Blunt quite a few times. In terms of Roy Blunt, he does not hold town meetings, he does not communicate with constituents,” Oyster said. “It’s really frustrating to call him.”
Oyster also encourages others to call their representatives as well. In fact, her Instagram bio reads, “CALL YOUR FREAKING REPRESENTATIVES,” followed by Roy Blunt and Claire McCaskill’s names and phone numbers.
In addition to her interest in taking action and communicating with members of US government, she is also involved in groups at the university she attends, WashU, geared more towards local issues.
In order to become an active participant in dialogues about the divisions within the St. Louis area, Oyster joined a club at WashU called City Faces, which allows students to travel to a housing project and tutor kids in downtown St. Louis.
These experiences illustrate to Oyster the extent of the disparity that separates people of different races and socioeconomic status throughout St. Louis.
Moreover, the participation Oyster has had in her community outreach engagements have opened her eyes to the privilege she has experienced in her own life.
“Until you recognize your privilege and are willing to look past that and feel empathy for the people around you, that’s when the change is going to happen,” she said.
A sophomore in college, Oyster already has her sight set on a career in politics. “I want to get into politics. That’s the long term goal for me. Whenever I say that to people they often respond, ‘Oh why would you want to do that? Especially now.’ It always reminds me that I have something to prove now,” Oyster said. “This is what I want to do and what I am passionate about.”