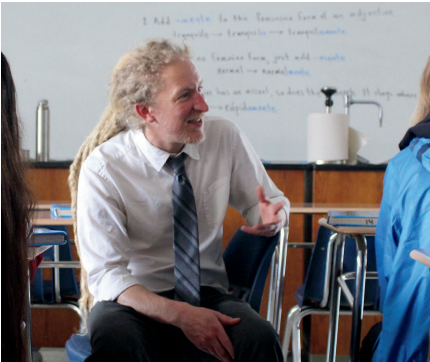 “I felt like I had woken up to a new world, which wasn’t true, obviously. We had been living in that world the whole time,” CHS Spanish teacher Señor Johnson said.
Johnson was shocked by the recent election. “It was just that that world existed to such a great extent that I think a lot of us were surprised, and it feels very different ever since.”
For Johnson, remaining apolitical in the classroom is harder than ever.
“We’ve never seen an administration like this,” Johnson said. “We’ve never seen one come out with such negative terms against the very people whose culture it is my job to teach. And I take that personally, even though I’m not Latino. But I’ve dedicated my life to standing for that culture and to talk about it and to teach it.”
With regard to his duty as a teacher, Johnson assures that his classroom remains a safe place for students, regardless of their views.
“I’m careful in class to both acknowledge that it’s okay if you feel a different way,” Johnson said. “Also, as a Spanish teacher whose job description includes global literacy and global citizenship, we can talk about the issues of the wall or immigration, and it’s okay that my view that all humans are humans and no human being is illegal, it’s okay that [my students] know I believe these things.”
In the midst of protesting and marching to stand up for his rights and others’, Johnson works to help his students see how they too can help.
“Sometimes showing up is the work. Other times the work goes further than that,” Johnson said. “The minimum we can do is to stay informed. Never before have I seen that there’s such an outright war on the truth. And if truth loses that war, we are in big trouble.”
Johnson has been using social media to not only get his message out to the world, but to engage in conversation with individuals with whom he doesn’t agree.
“A good conversation isn’t always that I convinced you that you were wrong or you convinced me that I was wrong. Sometimes it’s just sitting down and exchanging ideas,” Johnson said. “And after, you should realize how much better you understand how someone thinks about a certain topic. Then we walk away, and both of us are a little humanized by it. We are a bunch of individuals and not just a bunch of bad ideas.”
As Johnson looks to the future, he hopes to reach out to those who may feel they are unwelcome in America.
“I think the Mexican wall is a metaphor for all of the walls trying to be built around us right now. The work that we have, I think, is to make sure that for every brick that comes up, we take two down.”