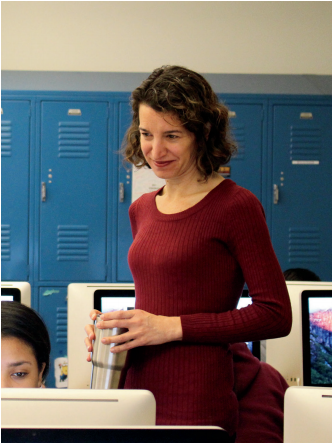 “I can’t sit around and do nothing,” Wydown Middle School Literacy teacher Deb Baker said. “I feel like I have a responsibility to try to promote change in places where I think change needs to happen.”
Baker has been passionate about certain social issues since a very young age. “I think that my parents probably had a lot to do with it. They made me aware of certain things in our communities that need people to pay attention to,” she said. “I think sometimes it’s overlooked how much we can do in our own small community [to make change].”
Baker’s passion for creating social change within her community led her to found the Gay-Straight Alliance at Wydown last year with Social Studies Teacher Aimee Snelling.
“We wanted to make sure that students who identify as LGBTQ+ and their allies had a safe space to discuss issues or to talk about anything,” Baker said. “ Working with [the GSA] has prompted me to read more and learn more and go out in the community. I’ve gone to panel discussions and things like that so that I can better understand the issues that are facing that part of our population.”
Beyond Wydown, Baker has also joined many organizations in the St. Louis area devoted to social change. In particular, she works with the International Institute of St. Louis, an organization that helps immigrants transition to life in the United States by teaching them how to navigate various aspects of American society.
Within the Institute, Baker is training to become a part of the Speaker’s Bureau.
“The Institute needed people who were willing to become trained about issues surrounding immigrants and refugees in our community. They wanted people to go around the community and try to dispel some of the myths people had about refugees,” Baker said.
As she works to defend the most vulnerable members of society, Baker understands that change does not come quickly. “It’s hard to see big change, but I’m learning to be more patient,” Baker said. “Even if I can’t always see big change in the issues that I’m passionate about, I can see changes in my own awareness of myself and of my own bias and assumptions. We can always work on ourselves.”
Also on a smaller scale, Baker has seen changes in the students that she teaches. “I think that sometimes students feel like they are powerless, but I see them as anything but powerless,” Baker said. “As a literacy teacher and a writer myself, I think that there is a lot of power in our written words. Anybody can start a blog. Anybody can write a letter to the editor. There’s a lot of power in sitting down and trying to get one’s own thoughts together about an issue and then trying to persuade other people to listen. Some of our biggest movements in this country have had young people at the forefront of them. Young people have a lot of power to stand up and ask questions of people in power. There’s lots of ways to use our voices,” Baker said.
But Baker also understands that her students must immerse themselves in the writings of those who do not share their ideas before they can most effectively advocate for their beliefs.
“Sometimes, we read things written by like-minded people, and while that can be interesting, it’s actually more important to read articles and books that are written by people who have different views than you do on whatever issue you are thinking about,” Baker said.
To make a difference, Baker does not believe that an individual must change the whole world.
“It’s important to celebrate when you see small successes because otherwise, it feels like a hopeless battle,” Baker said. “I can’t just sit back and point fingers and wish that something would be different. That just doesn’t seem like the right way to live, so that’s not how I choose to live.”