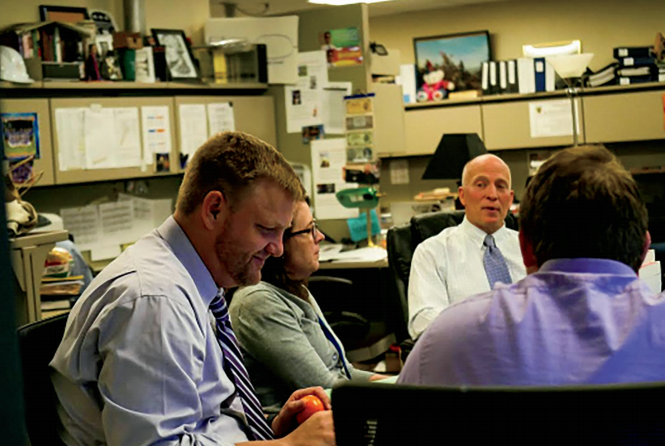 The Social Studies teachers offer perspectives on the historical significance of the Trump presidency and how to address the controversy in the classroom.

A main component of all history classes is to draw parallels with the events of the past and the events of the contemporary world. The Trump Administration is no exception to this rule and the CHS social studies department is intent on discussing the actions taken in Washington with social studies students.
CHS history teacher Josh Meyers is adamant that these actions must be discussed within our social studies classrooms, despite their controversial content.
“I can’t imagine being a social studies teacher and, regardless of your politics, not being excited to draw parallels and make connections between the past and what’s happening today. If there’s any place that those things should be discussed, it’s in a social studies classroom,” he said. “There are some voices that are very angry at teachers for talking about the issues and sharing their personal thoughts and I can understand that. What I can’t understand is someone saying that this discussion has no business in a social studies classroom.”
Parallels can be easily drawn between today’s political events and the curriculum social studies students are studying.
“In AP history and sophomore history it’s so easy to make connections between the content that we are currently studying and the election,” Meyers said, providing the example of nativism. “The era of nativism in the 1850’s looks, sounds, and feels different than the era of nativism today, but there are some important similarities, too.”
Social studies teacher Richard Kordenbrock agrees.
“In the sophomore history class, I think it’s very important because a lot of the issues we talk about – the industrial revolution, New Deal, great society – these things are directly relevant to what we study.”
However, some subjects tend to be more controversial than others. Although most of the teachers discuss nativism in their classrooms, some are hesitant to directly call Trump a nativist.
“I never called Trump a nativist,” Meyers said. “I said Trump has clearly tapped into a fear or concern of immigration and they may not call themselves nativists, but nativism is a phenomenon that has always existed in America, and it ebbs and flows with economic boom and bust.”
Social studies teacher Paul Hoelscher also refrained from labeling the president, however Kordenbrock felt that Trump should be called a nativist, if he were to adhere to nativism’s political definition.
“Why not call him what he is?” Kordenbrock said. “Is that not proper in a history classroom?”
The teachers themselves are concerned about the political climate of the country that resulted from the election.
“I feel like the political race and the campaigns and the way we talk about public policy it is something that I am disgusted by as a teacher of politics,” David Aiello, CHS history and psychology teacher, said. “Our inability for people of different opinions to discuss attacks is very, very troublesome to me because if you go back to our founding as a country, people had incredibly different experiences, feelings, and beliefs, and yet they managed to compromise. Maybe it wasn’t perfect, they got a constitution that still included slavery and obviously there were flaws, but they were able to come to some agreement.”
Meyers agreed, adding that, “political debate and discourse in this country has just disintegrated.”
CHS history teacher Chris Livingston felt that this inability to speak stemmed from extreme polarization between the two dominating political parties which bled into people’s personal lives.
“Americans seem to be on that track of ‘I’m right, so if I’m right and you have the opposite opinions, then therefore you’re wrong.’ And if somebody’s wrong, you don’t want them to win,” Livingston said.
For Aiello, this track is a scary path to be on.
“To me it’s even more. It’s not just that you’re wrong, it’s now that you are stupid, evil, a heretic, whatever. It’s not just that your idea is wrong, it’s that you personally are a bad person,” he said. “The stories of members of congress, from different parties, going out to play softball together, being family friends together, that just doesn’t happen anymore because if you are on that side of the aisle, you are the enemy, you are trying to destroy our country. That’s just very scary to me that we are in that situation.”
Despite this fear, both Livingston and Aiello believe that this tense climate can and needs to be changed.
“You should be able to knock on your neighbor’s door, have them over for dinner, and not talk politics. And if you do, it shouldn’t turn into a fistfight,” Livingston said.
“To me, maybe the approach is that the swamp of Washington D.C. is so infested that we have to start with local things: school board elections, alderman election, mayoral elections,” Aiello said. “And to start having more civil discourse at that level and slowly build from the ground up.”
Aiello added that the black-or-white approach to politics not only creates further division between the parties, but results in neither side winning.
“All or nothing…you’re gonna get nothing,” he said.