U.S. Ambassador to Ireland, Kevin O’Malley and Chairman of the Joint Chiefs of Staff, Gen. Martin E. Dempsey, meet at the U.S. embassy in Dublin, Ireland, Aug. 18, 2015. (Photo from the Department of Defense, Wikimedia Commons).

U.S. Ambassador to Ireland, Kevin O’Malley and Chairman of the Joint Chiefs of Staff, Gen. Martin E. Dempsey, meet at the U.S. embassy in Dublin, Ireland, Aug. 18, 2015. (Photo from the Department of Defense, Wikimedia Commons).

O’Malley on a Mission

“I have known President Obama since the beginning of his campaign, and I have campaigned for him all over the US. I would campaign for him in Missouri, Kentucky, Pennsylvania and Iowa,” Former US Ambassador to Ireland and St. Louis native Kevin O’Malley said. “I was someone who did all kinds of things: knocking on doors and some fundraising. For me, it was a labor of love.”

In July of 2007, O’Malley began working on the presidential campaign by organizing a series of fundraisers for Senator Barack Obama.

“Nobody joined [the campaign] thinking they were going to get some fancy job at the end,” O’Malley said. “He asked me if I would be ambassador to Ireland, and I said sure. It’s a huge honor to be asked by the president of the United States to be an ambassador anywhere.”

Knowing that O’Malley’s family traced back to Ireland, Obama figured that he was the right person for the job.

“[My grandparents] came to the United States at the beginning of last century with seven children and no money. My grandfather and grandmother were not educated. They left Ireland because they were starving to death,” O’Malley said. “They were refugees, not any different than the refugees that we are talking about today. The United States accepted them into the country.”

On June 5, 2014, Obama nominated O’Malley to be the US Ambassador to Ireland. One month later, he began his confirmation hearings, and by September, he was officially appointed, serving until Jan. 20, 2017.

However, O’Malley had no previous experience as a foreign service officer. After receiving a law degree from St. Louis University School of Law, O’Malley spent the first decade of his professional life prosecuting mafia cases on the West coast until returning  to St. Louis to work on white collar criminal cases.

“I think I was a little bit anxious about[taking the job] because I thought it would be an entirely different avenue to pursue than law,” said O’Malley. “It turns out it’s really not. As a trial lawyer, you dealt with juries. They’re just people, and being the ambassador was just dealing with people.”

About two-thirds of US ambassadors reached their title through years of foreign work in the State Department. O’Malley took the path less traveled.

“It helps to know a President,” he said. “The President has the obligation to appoint these non-career people, like me. Generally these are people who know the president, who have a personal relationship with the president.”

O’Malley’s role as Ambassador to Ireland, or Chief of Mission, meant he was in charge of United States operations in the European country.

“There are about 250 employees of the embassy in Ireland. About half of them are American and about half are Irish, “O’Malley said.

O’Malley also acted as the spokesperson regarding any government operation. In Ireland, O’Malley was the personal representative of President Obama.

His role also included acting as the personal representative of President Obama and traveling the island during visits from Vice President Joe Biden during and other high ranking officials.

While residing in Ireland, O’Malley stayed with his wife and his staff of nine people at the Deerfield Residence: an 18th century mansion sitting on nearly 70 acres of land. His only neighbor was the Taoiseach, or Prime Minister of Ireland, Enda Kenny.

Although the majority of O’Malley’s assignments were based in Ireland, he was allowed to come back to the United States on certain occasions.

“There is a chief of mission conference, once a year in Washington, where all of the ambassadors from all over the world to come in and share ideas and hear what’s the latest that’s going on,” O’Malley said.

The former ambassador also had an opportunity to fly back to the US that other ambassadors did not have.

“I came back every St. Patrick’s Day. The prime minister of Ireland, called the Taoiseach, has a standing invitation to the White House for a meeting with the president and a party at the White House every St. Patrick’s Day,” O’Malley said. “I would always come back and would lead the delegation back to the US and be with the President and the Taoiseach during their meetings in the oval office and then at the party later on.”

During his almost three years in office, O’Malley warranted numerous progressive programs and actions. The one that stood out was his creation of the Creative Minds program in Ireland. Since Feb. 13, 2015, the program has provided the opportunity for young Irish citizens to interact with American artists, writers, filmmakers and musicians.

“The goal of Creative Minds was to make sure that the next generation of Irish leaders knows that they have no better friend in the world than the United States,” O’Malley said. “I would invite people from the US to come to stay with me at the Ambassador’s Mansion in Dublin and then either to perform for, speak with or demonstrate to various select Irish audiences. We brought in a couple of former St. Louisans.”

One of the entrepreneurs that O’Malley selected was Danny Meyer, the owner of many New York restaurants, who led the way in banning smoking in restaurants.

“He’s really a creative force in [the program],” O’Malley said.

Through his Creative Minds program, O’Malley has left a legacy behind in Ireland.

“They are continuing on with that now, and I believe it will continue on with that into the future,” he said.

Galway, the sister-city to St. Louis in Ireland, is a crucial part of ensuring these healthy business connections. O’Malley plans to continue to try and link these two cities together.

“They just are going to be looking more globally than they have in the past,” he said. “And, I just didn’t want them to overlook the United States as they were doing that.”

According to O’Malley, the United States is Ireland’s closest friend. “They love our country and they love the people that live in it,” he said. “The welcome that my wife and I received at every corner of the Ireland was absolutely unbelieveable,” O’Malley said. “They view the United States different than they view any other place on Earth – more favorably. The American ambassador is the tangible thing in their presence, so the American ambassador is treated with a great deal of warmth.”

This Irish appreciation included everything from schoolchildren waving American flags while a band played as he entered a village to an announcement over the PA speaker on his return flight recognizing O’Malley for his service in Ireland.

When Obama left office on Jan. 20, 2017, O’Malley departed alongside him. He and his wife returned to St. Louis soon after.

As a retired ambassador, O’Malley  plans to incorporate what he learned while in Ireland to the culture of St. Louis.

“There’s a spark and a spirit in Ireland right now, a ‘try this’ approach. I think we could use a few spoonfuls of that in the St. Louis recipe,” O’Malley said. “We’ve got a great core in St. Louis, but there’s so much more we can do. I think that’s where I’m going to spend my time in my next part o

f my life trying to see if we can find new ways to make sure [teenagers] stay in St. Louis.” 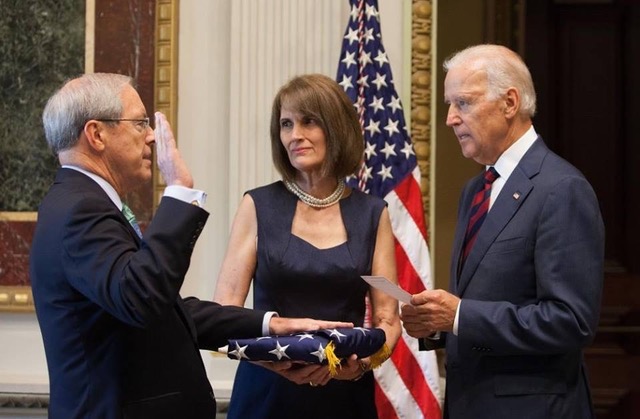 Gallery|9 Photos
Vice President Joe Biden swears Kevin O'Malley in as US ambassador to Ireland.
Donate to The Globe