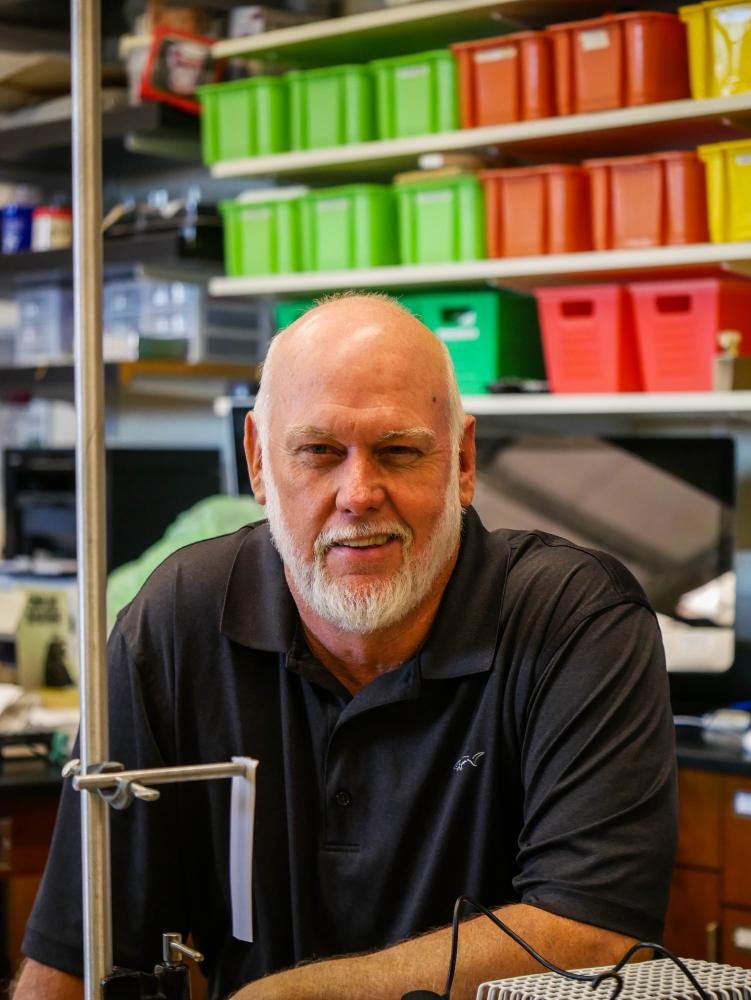 Rex Rice in his physics classroom.

District Science Coordinator Nathan Peck remembers that even before meeting Rex Rice, a seasoned veteran who has taught physics at CHS for 28 years, he had heard the name Rice throughout the teaching community. “‘Rex Rice, Rex Rice,’ I started hearing that name over and over for everything having to deal with physics,” Peck said.
Rice’s presence and fame throughout the physics community is not a surprise. “Anyone who knows me knows how much time I put into this. Except for my wife, [teaching] is probably the most important thing in my life,” Rice said.
Rice’s work ethic has certainly been appreciated by students and by colleagues alike.
“He doesn’t really set the standard for other people because everybody realizes that his standard is a Rex standard and no one’s going to get there except him,” Peck said. “His wife would complain because he sets his alarm for 2:30 a.m. sometimes to get stuff done and get ready for school.”
CHS junior Cooper Kennelly has also noticed Rice’s dedication.
“A lot of teachers have office hours that are somewhat restrictive for asking questions because they’re often not there before or after school,” he said. “But there’s about an 85 percent chance that regardless of when you walk into Rice’s room, he’ll be there and will be willing to answer questions.”
From the very start, Rice has devoted himself to making the science curriculum at CHS better. In the process, he has left a significant impact on the lives of his students and on the CHS community.

Even before beginning his time teaching at CHS, Rice knew he would be dedicating his life to teaching high schoolers and impassioning them towards the sciences.
Decades before CHS students would be visiting Six Flags as part of the freshman curriculum, a young boy named Rex grew up in the Chihuahuan desert with a particular interest in the physical sciences.
“As far back as I can remember, I liked making things and figuring out how they worked,” Rice said.
Rice’s journey making things would take him from New Mexico to Arizona and then out of the southwest. Rice first came to St. Louis as part of a workshop team of four physics teachers who went around the country to different universities, leading conferences with other physics teachers. Having traveled far and wide, Rice finally met the love of his life here, at UMSL, and Mr. Rice, as he put it, “struck up a relationship [with her].”
It was out of love that Rice moved to St. Louis and applied for a job. One of the offers came from CHS.

“It was interesting, but I was very reluctant to accept it because they hired me to take over the physics program, and the person I was going to replace wasn’t retiring for another year,” Rice said.
Rice ended up accepting the offer, not because of the classic “rich kids” argument, but because he lived very close to CHS. Almost as if a stroke of fate, Rice’s decision to teach at CHS, despite the lower pay and smaller school size, has proven to be beneficial not only to himself but also to the school district as a whole.
His impact has been met with strong words of praise from Peck.
“He’s very analytical in his thinking about everything including what to teach and how to teach it,” Peck said. “His insights into physics teaching pedagogy have changed the way physics is done nationally in terms of this modeling approach. He sets very high standards for his students and was able to get students to achieve those standards.”
To meet those standards, Rice often challenges students beyond what they think themselves capable of doing.
“The dude murders you with homework,” Kennelly said. “But if you put a brick through the class, the brick would know physics because of the amount of work he gives you.”
Though he often complains about the amount of work, Kennelly is ultimately grateful for the rigor of Rice’s courses.
“I think it’s one of the few life experiences that’s taught me how to really buckle down because it’s sink or swim and if you can’t put up with the workload, you’re going to sink,” Kennelly said. “I missed half of a question on a 12 question quiz and I got a 72 percent.”
His approach and implementation of the “modeling methodology” has created an environment that fosters success and critical thinking.
Despite the tough workload, Kennelly still sees Rice’s modeling approach as one of his largest accomplishments.
“He’s probably going to be kind of an urban legend because his classes were so hard,” Kennelly said. “But at the same time, I think he’s profoundly changed the way science is taught at Clayton with his modeling approach.”
The merits of the modeling approach are evident as the achievements of Clayton students in science have been nationally recognized.
“A normal kid [at CHS] is a top student anywhere else because of the sophistication of their thinking about natural systems and also because of how information is discovered in the classroom,” Peck explained. “The difference between memorizing and understanding is huge, and [Rice has] always pushed for understanding how something works.”
“Mr. Rice was the one who finally got me into the work ethic and habits that not only got me through high school, but are currently getting me through college,” Jake Shepard, currently an engineering student at Missouri S&T, said.
Hence, Rice sees this model as one of his fondest memories at CHS and his lasting legacy.
“I think that’s an important memory because it’s something that I worked hard at understanding and felt that it had the possibility of really improving the education of a reasonably large number of students,” said Rice. “At the time, the attitude were such that [the district was] willing to try something that was different — that wasn’t necessarily the norm. And I think that’s important.”
Despite the great accolade of achievements, there still comes a time when a teacher must decide to retire. And for Rice, that decision came with a lot of caution.
“The decision to [retire] sooner rather than later was governed more by things I want to do in my personal life than to retire teaching,” said Rice.
His dedication to his field is evident as Rice plans to stay involved in the American Modeling Teachers Association and to use his contracting background by volunteering for Habitat for Humanity.
Like his students, Rice’s colleagues also feel as if Rice’s leadership has strongly impacted them.
“Everybody in the science department is on the same page because they have a national leader in teacher development that happens to work here. He provides professional development to everybody in the department all the time,” Peck said.
For students, both current and former, Rice’s influence can last just as long.
“I think people understand how fortunate we have been to have Rice either as a teacher or just on our staff. If there’s a student who doesn’t realize it while they have him, they definitely realize it when they continue on through our science program and beyond.”
As students feel fortunate to have gone through Rice’s classes, Rice also feels lucky to have been a part of the Clayton community. “The daily interactions I’m having with kids, the feeling that I’m having a direct impact on kids, I’m really going to miss it,” Rice said.