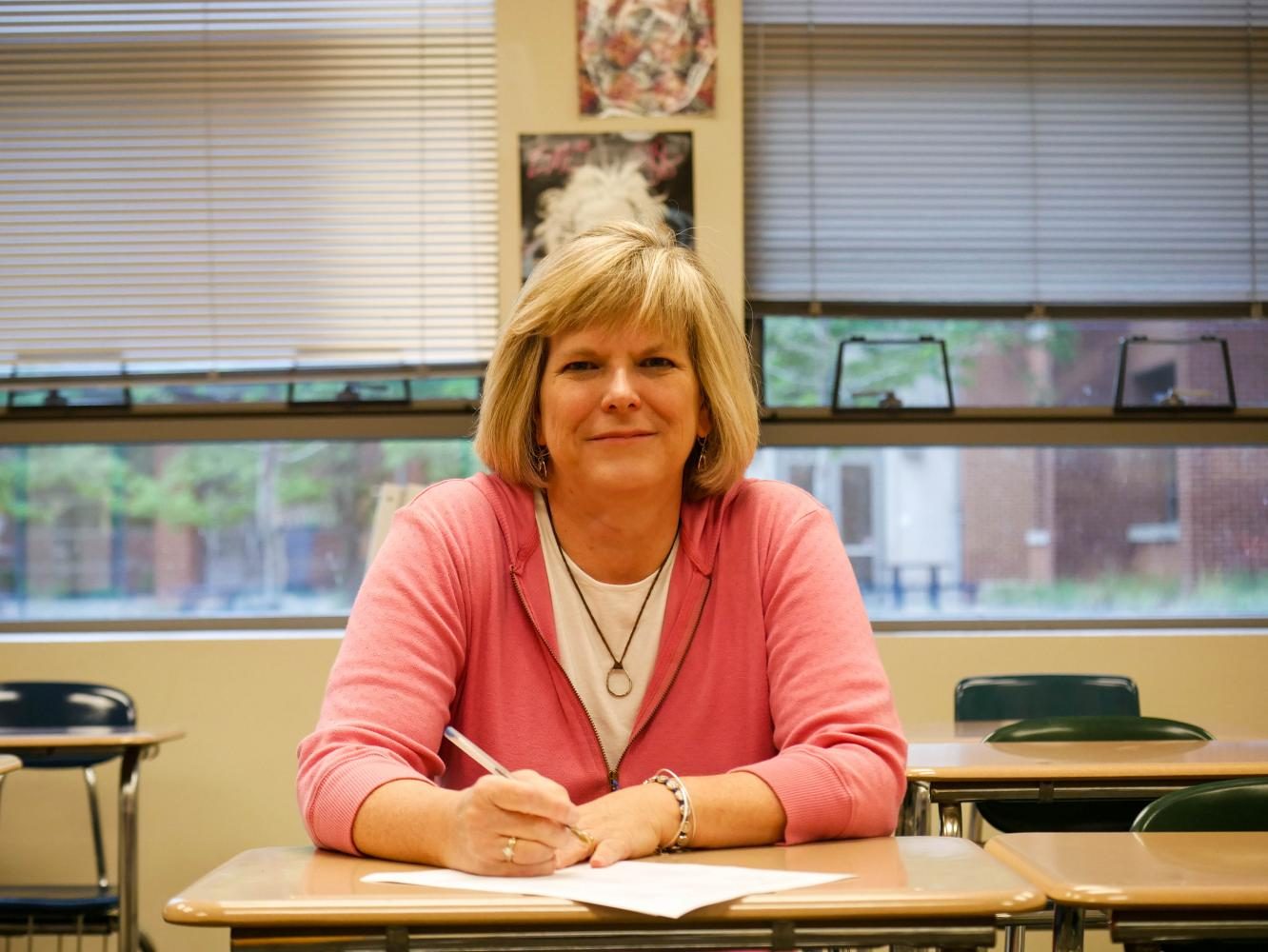 Heidi Shephard in her classroom

“Teaching keeps me more optimistic. I have hope for the future. Too many people get tainted by media that says ‘teenagers are doing this and that’ but I actually know what teenagers are doing,” CHS math teacher Heidi Shepard said. “I work with [teenagers] on a daily basis. I get to see what potential [teenagers] have and where [their] hopes and dreams are. Where I think it’s easy to get tainted outside of education.”
Shepard has been teaching for 32 years.
Initially, she taught at a high school in Kansas City as the lead geometry teacher, but after three years, she decided to return to St. Louis, the town she grew up in. The position available to her was a job teaching middle school. The position was meant to be temporary, but Shepard ended up teaching middle school for 15 years. She fell in love with the atmosphere.
“When I wanted to come back to St. Louis the gig that was open was in middle school,” Shepard said. “I thought I would just do it until I could find a better job. I taught junior high for 15 years. It was sheer circumstance. That was the job that could get me back to St. Louis. I took it and I ended up loving it.”
Although Shepard loved the middle school teaching experience, she was ready to move up to the high school level of secondary school with the as she calls it, “higher ups.”
“After 15 years, I was done. I was good,” Shepard said. “When I came to [CHS], [I] said, ‘Give me 9th or 10th.’ I still liked what I did, I just needed something new.”
Shepard did not always have her heart set on a career of teaching math. She knew that teaching was the field for her, but was not decided on the subject. Art and math were her two options.
“I didn’t think I could help someone else become a better artist,” Shepard said. “The area that I could help someone grow in was mathematics.”
Shepard is a self-labeled “math geek.” She enjoys applying math to the real world and loves the moments when her students learn to connect math to life situations. Seeing her students struggle through hard topics, but end up successful and confident by the end of the unit compels Shepard.
“Right now we’re in circles, which I love. I love circles because it takes everything I’ve taught all year long and puts it all together. It makes kids very curious,” Shepard said regarding a unit in geometry. “I like teaching proofs. I see kids hate them and then get to being pretty successful. It’s fun to watch them feel really powerful about the success that they have. I get to see kids transform, so it’s not so much about the content. It also teaches kids that other challenges down the road can be overcome. For me as a teacher, that’s huge.”

While Shepard loves the academically focused Clayton environment, she also notices the hardships that students who do not desire to follow a traditional post-high school path face.
“I think it’s hard for students who don’t want to go to college to go to Clayton High. I don’t think college is a must,” Shepard said. “Let’s worry about the learning. Let’s honor the kiddos that aren’t heading off to a traditional university. I feel bad for kiddos having to go against the norm. As much as our students say they go against the norm, they pretty much stay pretty true to course.”
Shepard happened to not have that struggle. She followed a more traditional college path and became an educator.
As a child raised by teachers, Shepherd fell in love with the school setting long before her parents could convince her otherwise.
“My parents, as teachers, were really opposed to any of their children becoming teachers,” Shepard said. “So I was pushed really hard not to be one. It was more from my dad than my mom. My mom was an elementary school teacher while my dad taught high school. Every teacher sees it transform in their 30 years of teaching. I was still on the youthful optimistic side of education.”
Due to her parent’s distaste in her future as a teacher, Shepard was sent off to college to become a computer science major.
“I said I’d try it on, because I was a strong math kiddo,” Shepard said. “And females were starting to get pushed into less traditional roles. But I took computer science classes and I got A’s and I hated them. I hated the classes. And so I eventually said, ‘Tried it. Got my A’s. I have to be quiet all day long. It’s just not who I am. It’s your fault. You raised me in the school setting.’ And so of their three daughters, two of us are teachers.”
In addition to growing up with her own parents in her school, Shepard’s own children have had the opportunity to attend the School District of Clayton. Her son, Jake Shepard attended Clayton schools from the beginning of kindergarten, all the way to walking across the stage in a cap and gown. Shepard’s daughter and current CHS senior, Sarah Shepard, will follow her brother and graduate this May.

“I’ve had the pleasure of having my kids go here,” Shepard said. “What makes it special is that everyone sees the importance of education and learning. I got to see for my children, how well teachers know their students and how because of that they reacted accordingly. They knew how to help my children access the curriculum better.”
Shepard’s retirement directly coincides with the graduation of her daughter.
“My daughter is heading off [to] college and playing softball, so I look forward to just going and watching her play ball,” Shepard said. “That’s what really sealed the deal that I would retire this year as opposed to some other year. I want to be able to just watch Sarah play ball and not worry about lesson plans and not worrying about students getting a sub. I just want to go watch Sarah. I just want to watch my daughter.”
In addition to going to softball games, Shepard plans to spend her retirement gardening as well as continuing to sketch drawings.
“My big creative outlet is gardening,” Shepard said. “It’s my canvas. That’s where I spend my energy. I have five gardens and I’ll probably put in another five later. I live on three acres, so gardening is pretty easy.”
Throughout her many years as a teacher, Shepard has been able to modify her teaching style time and time again. She’s spent most of her life in school, from the age of five as a student, to today as a teacher.
“I started out as the ‘sage on the stage’ where I would just talk at my students and it’s more about honing your craft as a performer and it’s very monologue,” Shepard said. “That’s pretty common for first year teachers. Now it’s very much the flip of that. I have my script. I’m more looking at faces. I might craft 20 problems and I might do all 20 of them. Or I’ll do all three of them. So I’m much more responsive to how my students are learning while I’m teaching.”
Not only has Shepard adopted this is her own classroom, but she’s taught other math teachers how to do the same. Shepard has shown CHS math teacher Kyle McCord how to better his own teaching.
“For me, [Mrs. Shepard’s] definitely been a mentor since I came in,” McCord said. “I’ve worked with her for the last three years and I think she’s done a good job of teaching me what it meant to be a teacher at Clayton. When I came in, she definitely emphasized that as a teacher at Clayton, it’s important for you to be a creator — not to just go out and find things, but to make a mark. Not to just repeat what you’ve done in the past. To do something new and always be innovative and that’s been really, really important for me.”
Many teachers have the goal for their students take interest in their subject. While this is to many, the most satisfying aspect of teaching, it may also be the most challenging.
“For a teacher, when students are misbehaving, as much as you might think teachers are after you for behavior, we are also on you so that we can do what we’re here to do and that’s to teach,” Shepard said. “Watching a student struggle and then finally getting it, watching kids do something I never thought of. It’s great to see them pushing and challenging each other in a way that’s exactly how I wanted to see them talk.”
From her students, Shepard has learned much about life as well as how hard it is growing up. She’s learned humor and perseverance. Shepard has learned that the most important thing is to be honest – not just to others, but also to oneself.
“My advice to you is to make the world great,” Shepherd said. “I’m relying on you to do that, as did the generation before me did on my generation. It’s kind of what you get handed. We’ve given you enough to do, so there you go. We’re going to keep you busy.”