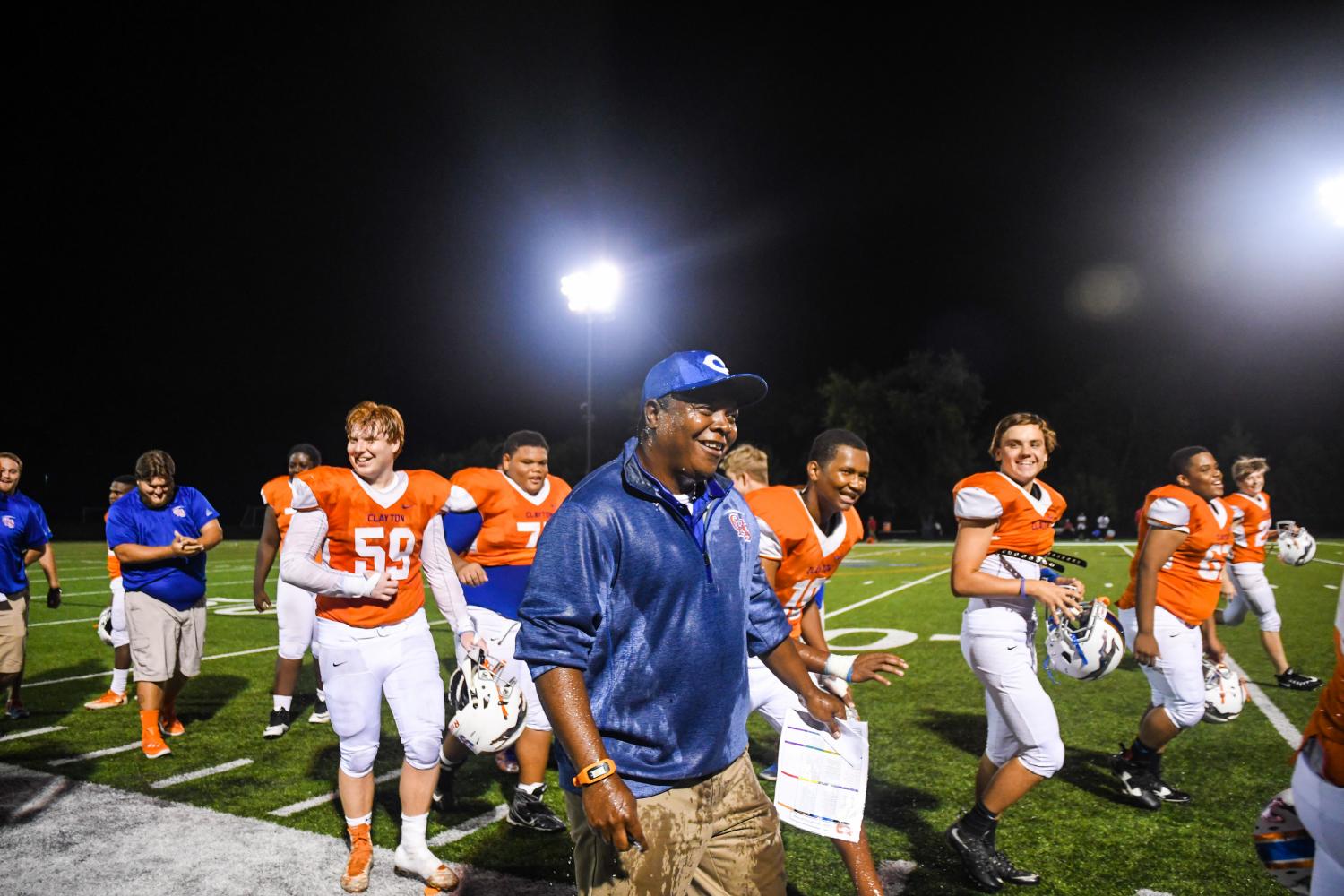 “When I was [playing] at Miami of Ohio, there was this speaker who played in the NFL and he just gave me a fact. He used to always tell me and it stuck in my head that ‘only two percent of all college football players make it to the NFL, so you better have a backup plan,’” Linwood Barnes, the first-year head coach of the CHS varsity football team, said.

Barnes was introduced to the sport of football at a young age. In 1977, when Barnes was only two years old, the Oakland Raiders drafted his uncle in the 5th round of the NFL draft.

Already living in California, Barnes moved to Oakland after his uncle entered the league.

Growing up, Barnes was around football and the Raider’s organization. Additionally, Barnes had four other uncles who all were very passionate about the game. Their passion helped teach Barnes at a very young age to love the game.

For his senior year of high school, his coaches asked him to play quarterback for the 1992 season. Because Barnes had grown up primarily playing only wide-receiver, he was hesitant to play quarterback during his last season of high school football. However, he decided to please his coaches and go for it. As quarterback, Barnes led his team to the California State Championship where they became state champions for the 1992 season.

Winning the state championship allowed Barnes to cap off a great high school football career with a fairytale ending.

While in high school, several colleges recruited Barnes for football. Miami University, Western Michigan and Bowling Green were just some of the schools interested in Barnes.
However, Barnes decided to play at Grossmont Junior College in California.

During one of Barnes’ games in California at Grossmont, Sean Payton, then offensive coordinator at Miami University and now current head coach of the New Orlean Saints came to scout Barnes.
“I remember it like yesterday, I was catching punts and I didn’t know who it was. I had a pretty good game and as soon as after the game he came to me. He said that he liked me and he offered me a scholarship right there,” Barnes said.

Thrilled about this opportunity, Barnes decided to transfer to Miami University to play football. After two years at Miami, Barnes transferred again. This time to Southern Illinois University Carbondale which is where he ended his college football career.

After playing college, Barnes tried out for the River City Renegades, a team in an arena football league in the St. Louis area, and ended up making the team.
In 2002, after one year, he stopped  playing for the Renegades because the situation was not working financially.

“I wasn’t making any money. We were just doing it for the love of football,” Barnes said. “Trying to live the dream and still hold on to the dream when once you get to that point, you realize that it is over with and time to start making money.”

The speaker at Miami University had always told Barnes that everyone better have a backup plan. Barnes’ backup plan was coaching and teaching.

“I love teaching. The biggest part about football is you need to learn how to be an educator. Teaching helps me motivate the kids. My first love was always teaching,” Barnes said. “My favorite teacher was a history teacher, and I always told myself that I wanted to be a teacher.”

After retiring from the Renegades, Barnes began teaching and coaching in 2002. Currently, he teaches Government and AP Government along with other history classes at Hazelwood East High School. At Hazelwood East, Barnes is also part of  a mentoring program that assists student-athletes who are struggling with their grades or in various other ways. Additionally, he is also a Girls’ Track and Field coach at Hazelwood East. However, as he wants to dedicate most of his time to Clayton football, he plans for this year to be his last as a track coach.

As head coach, Barnes has various goals for the team.

“I want to teach my players what it means to be good football players and good samaritans. I want my players to become better people in general. Discipline, being on time, and making sure they got their school work done. Understanding what it means to be a student then athlete. Because they’re student athletes and student comes first,” Barnes said.

With regards to Barnes’ goals, he wants his players to learn valuable life lessons through football, which assists in the players becoming better players on and off the field.

“He always talks about never giving up and to always get the fight. He always tries to connect football to life,” junior Nate Slaughter, a player on the varsity football team, said.

As Barnes looks into the future, he plans to remain the head coach at Clayton for many years. He hopes that in one of the years to come, he will be able to lead Clayton to a state championship.

“Part of me feels like this head coaching job at Clayton was meant to be. One of my old roommates, who passed away, actually went to Clayton,” Barnes said. “It almost feels like I have been put in the right place trying as I try to change the [football] program.”