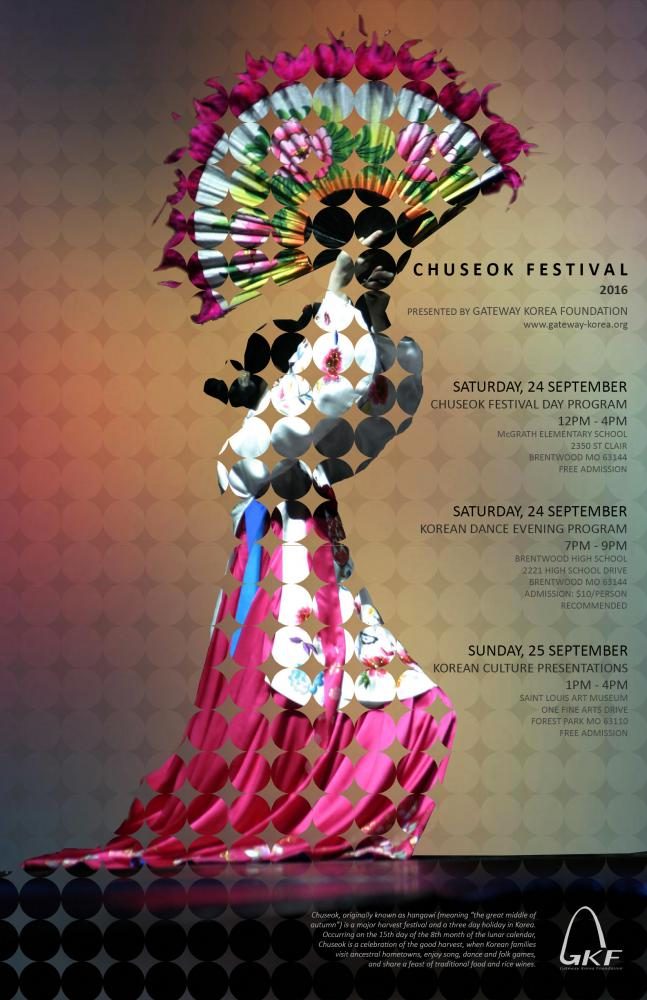 Every year since 2014, the Gateway Korea Foundation has held an annual Chuseok Korean Harvest Festival here in St. Louis. Chuseok (추석), also known as Hangawi (한가위), is Korean for “the great middle (of autumn)”. The major holiday lasts for three days and is the Korean equivalent of Thanksgiving. Chuseok occurs on the 15th day of the 8th month of the Lunar Calendar. Koreans celebrate this occurrence by visiting family, feasting on traditional food and drink, and playing folk games.

The festival, held in St. Louis from September 16th to 17th, was a recreation and introduction of traditional Korean culture hosted by the Gateway Korea Foundation. This year, the festival was held in three different locations: McGrath Elementary School, Touhill Performing Arts Center University of Missouri-St. Louis, and the St. Louis Art Museum.

On Saturday, September 16, the Chuseok Festival Day Program was held. A variety of performers came to display their talents, some of which included traditional Korean Instruments, Taekwondo, and K-pop Dance. Traditional Korean games were also taught and the opportunity to wear a traditional Korean dress, hanbok, was available to all.

Along with these hands-on activities, visitors got to sample and make different Korean foods, learn how to write in Korean, and do various crafts such as Kite making.

That same evening, a Korean Performing Arts Festival was held at the Touhill Performing Arts Center at the University of Missouri- St. Louis. Sponsored by the Consulate General of The Republic of Korea in Chicago, there were different musical and dance performances. Among the performers was the Chicago Korean Dance Company (CKDC), the Global Pungmul Institute (GPI) and various other Korean artists.

The CKDC performed four different traditional dances: a drum dance, Jang-Geom-Mu, long sword dance, Seung-Mu, a Buddhist monk dance, and Bu-Chae-Choom, a fan dance. With long white ribbons tied to their hats, the GPI dancers struck their drums while they wove through various formations, the ribbon fluidly moving along with them.

Other performers that night included singers both traditional and modern, as well as an orchestra and a Korean folk band. In the audience, several Clayton High School students attended. Samuel Yeom, a tenth grader said, “I expected the performance just to be traditional Korean songs, but there was also a western classical part to it. That was unexpectedly nice.”

On Sunday, September 17th, the St. Louis Art Museum hosted the Passport to Korea event. During this event, people could learn hangeul, the Korean alphabet, and how to write their names in Korean. Additionally, there was donghwa time, which translates to storytelling time. Korean folk stories about how the sun and the moon came to be, and how the Korean Pasque flower was created displayed Korea’s creative and playful spirit through narratives.

People were also able to try out Korean games such as Yut Nori, a Korean board game which involves throwing sticks in the air instead of rolling dice. Additionally, a Pungmul performance, traditional Korean Percussion, was held outdoors.