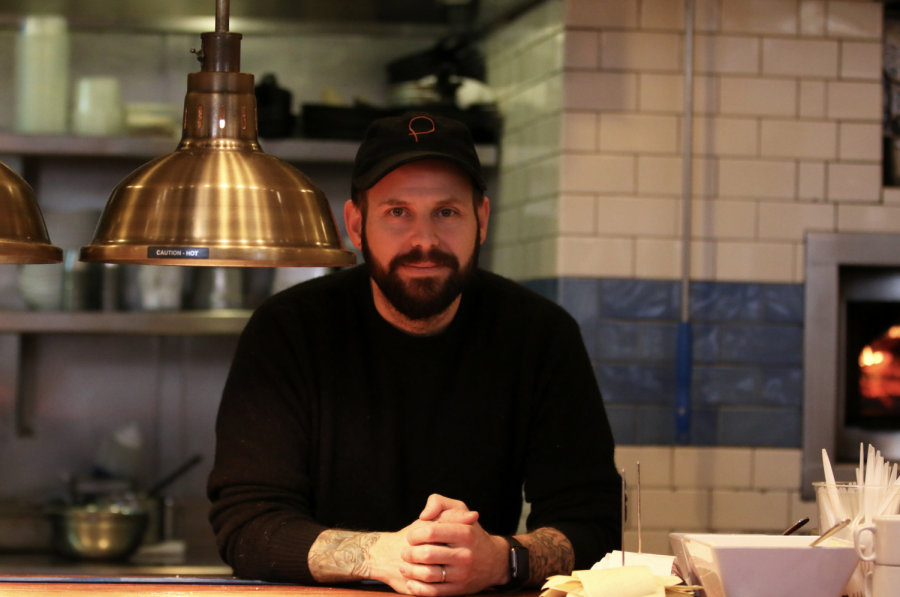 Photo of Gerard Craft in Pastaria.

As a child, Gerard Craft had practically no interest in fine food or fine dining.

“Growing up I was not that into food, to be honest. My entire family was into food except for me. I was the kid eating spaghetti-o’s and fast food hamburgers,” Craft said.

Craft’s life trajectory – and his food tastes – would change for good after getting in trouble at school.
“I ended up in a boarding school in Northern Idaho and the food being served in Northern Idaho was like grade-D meat, scary, scary stuff. I had to spend a month in the desert where they rationed you and you had to eat and cook out of a peach can,” he said. “All the sudden, anything good tasted really good to me. I actually got really adventurous as a result. When I left that high school, I’d eat just about anything in the world, which wasn’t my start into cooking, but at least it made me a less picky human being. “

After graduating high school from the northern Idaho boarding school, Craft left for Salt Lake City, where he would attend college and take photos of professional snowboarders in his free time.

“I was kind of doing school and on the side I was doing photography work for local pro snowboarders for their portfolios and stuff like that,” Craft said. “Unfortunately I spent probably too much time snowboarding and not enough time studying and ended up dropping out of college as a result.”

Craft found himself searching for a job that would be more financially lucrative and stable than the part-time snowboard photography gig. He washed cars during the day and cooked at a pool hall during the night.
“I wasn’t a big food guy per se but I really loved working in that kitchen even though it was like a craft beer hall. I really loved the camaraderie in the kitchen; it was just a fun place to work,” Craft said.

Realizing a newfound interest in cooking, but remaining somewhat uncertain with regard to his future and aspirations, Craft met with a career counselor – a meeting that would profoundly alter the course of his career and life.

“The career counselor kind of told me not to go back to school. He was like, ‘look, you might just be beating your head against the wall doing the same thing over and over. You like cooking, so why don’t you try culinary school?’ So I went to the local community college and enrolled in some culinary programs,” Craft said. “I really liked it, enough so that I ended up meeting a kid there that got me a job in a fancy restaurant up in the ski resorts.”

The transition from cooking in the pool hall to working in a high-scale restaurant environment was an eye-opening experience for Craft.

“It was tough. It went from thinking I was a hot shot at this little sports bar to these high end chefs screaming at me and throwing things at me and just going home near tears every night,” Craft said. “I thought a line cook was just a line cook. And I didn’t belong on their line. I think they were trying to get me to quit, to be honest. They said, ‘Look, we can’t have you on the line. There’s guys making the same money as you and they’re 10 times as good as you.” They said ‘Either leave or we’ll give you a prep cook job in the basement kitchen.’”

With little hesitation, Craft elected to take the basement job, an experience which would prove one of the most important decisions of his life.

“They would time me peeling onions and time me cleaning the coolers and yell at me, but it was honestly the best experience of my life,” he said. “I learned how to do everything; I ended up quitting culinary school. Not because I was failing but because I was learning so much in that basement kitchen. So sucking it up and accepting that demotion was the greatest thing that’s ever happened to me in food.”

Craft then participated in a work-study program, allowing him to explore the food culture in Paris, while cooking at the Paris Ritz-Carlton. There, Craft would acquire an understanding of the creative approach to cooking that would eventually define his own style.

“I grew up a graffiti artist so when I saw all these kitchens that were using savory items like tomatoes in desserts or using savory ice creams on savory dishes. This kind of ‘no rules’ approach to cooking blew my mind and that ending up shaping what Niche became initially,” he said.

After stints working in various restaurants on the East and West coasts, realizing the city’s untapped potential, Craft and his now-wife relocated to St. Louis, Missouri.

“I found some cheap real estate online and there were some cool things happening around here, so I thought it’d be really cool to be part of developing a culinary scene, helping it grow and be kind of more on the bottom floor than going to New York and fighting yourself upstream,” he said.

Craft’s observations of the dining scene in St. Louis upon his arrival were a source of inspiration in finding the niche he – and his restaurants – would eventually occupy.

Although Craft had an appreciation for higher-end restaurants such as Larry Forgione’s An American Place, Kevin Nashan’s Sidney Street, and Michael and Tara Gallina’s Vicia, he was inclined to style his restaurant towards the other end of the spectrum in terms of ambiance.

Craft’s inclination to style his restaurant in this way was a direct result of his own preferences in dining experiences. Craft opened Niche in 2005 with the intent of providing a dining experience different from the mainstream at the time.

“I’m covered in tattoos; I’ve always felt uncomfortable in dining rooms. I don’t like going out and wearing a blazer or a sport coat,” he said. “Now there’s a lot more people that accept the casual side of dining. That’s where Sardella, Pastaria, Brasserie, Taste came in.”

After an 11-year run, Craft decided to close Niche in the summer of 2016. Sardella is one of Craft’s most recent projects, which he opened in Niche’s place. Just up the street, on Forsyth, is Pastaria, Craft’s take on simple Italian dining. It is Clayton’s unique location that make it such a rewarding place to operate restaurants in.
“It’s such a great central area, it’s close to so many different neighborhoods,” he said. “You have Clayton and then right next to it Richmond Heights and Ladue, and U-City. It’s such a great central meeting point for so many people, including the fact that we have built-in business in the afternoon”

In addition to his focus on customer satisfaction, Craft places immense value and emphasis on the work environments he fosters in his restaurants.

Failure is another one of Niche Food Group’s five values – a word that Craft acknowledges seldomly appears on company banners or mottos, but a word that nonetheless defines his approach to his work and life.
“Failure [is the next one] which you don’t expect to see in a list of values. But I fail everyday, like a lot. I think they’re really important to growth. If you’re afraid to fail, if you don’t do anything in life because you’re afraid to fail, then nothing good happens.”