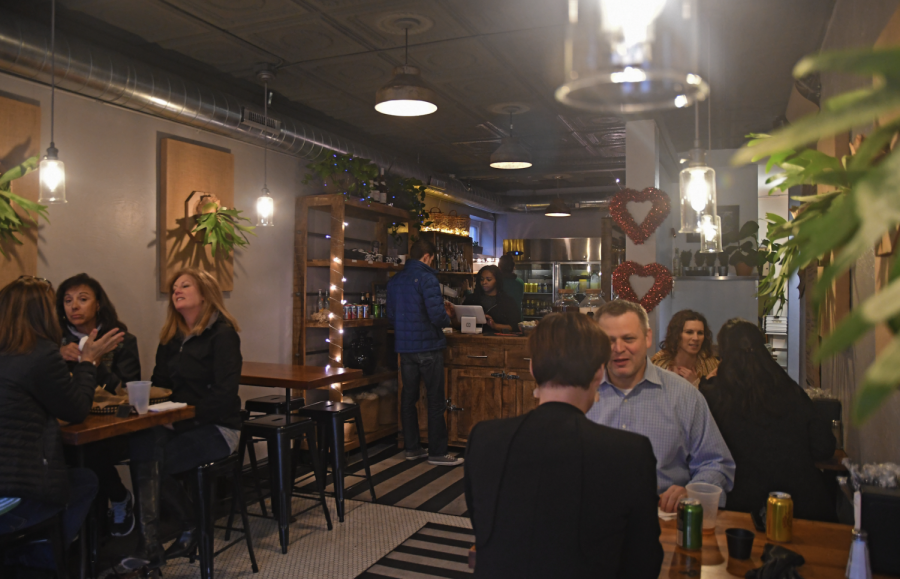 Located on Pershing Avenue in University City, Taco Buddha is a small but welcoming restaurant with a refreshingly clean and well-lit interior and an outdoor seating area adorned with their logo; a smiling Buddha holding two peppers and seemingly declaring, “Eat with Peace!”.

The restaurant has only been open since August 24th, 2017, but it has already managed to attract quite a large clientele with its worldly cuisine and ever-changing menu.

One of 66 Yelp reviewers (the restaurant has 4.5 out of 5 stars on the site) wrote of Taco Buddha,
“Cute location and decor, friendly service and THE BEST TACOS EVER! I am sad I live in California, I debate moving to Missouri just to be closer to Taco Buddha!”

Kurt Eller, who began leasing the restaurant last April, is the owner. Although this is his first and only restaurant in St. Louis, he was previously partnered with multiple establishments in Austin, Texas.

“[I was involved with] all kinds of different restaurants. Of the ones I was partners with, one was a fine dining restaurant that had fusion food and another one was a music venue that had more southwestern food,” Eller said.

Eller moved to St. Louis in 2005, mainly to pursue his corporate job at the time. However, passing by the building that would eventually become Taco Buddha each day encouraged him to join U-City’s restaurant scene.

“Taco Buddha, I’ve been playing with it for the last three years, catering to weddings with a food trailer, not food trucks, but more of an on-site catering. We were doing big wedding receptions, about five or six a year. I lived a block and a half away and watched this place, walked by this building every day. I always said if I got back in the restaurant business I would do something really simple, not a lot of moving parts. I just kept checking [this building] out and it was available, so I couldn’t pass it up. That’s why I’m here. Sometimes the best things just present themselves to you and you’ve gotta make a choice to go,” Eller said.

The inspiration behind Taco Buddha stemmed greatly from Eller’s childhood experiences. When he was in his sophomore and junior years of high school, Eller moved to a town in India with his father. He became very fond of Indian cuisine, especially southern Indian dishes, given that he lived on the southeastern coast of India.

“So that [living in India] just kind of inspired me to do street food, like tikka masala or tandoori, which they put in an Indian bread called naan, and it’s something very similar to a taco. It’s funny how all of those different geographic areas boil down to food and a piece of bread,” Eller said.

According to Eller, business at Taco Buddha has been plentiful since its opening, and Clayton’s ever-fluctuating restaurant scene has supported its growth.

“I think with Centene coming in and seeing the changes that are happening … the culinary scene is really growing in Clayton,” Eller said.

One factor that has helped Taco Buddha to attract customers amongst a sea of other St. Louis Mexican-fusion joints is its ability to introduce the unexpected.

Although one would assume that a taco joint would cater mostly towards the lunch and dinner hours, Eller is attempting to bring the Texas trend of breakfast tacos to the Clayton dining experience.

His slogan for this campaign questions, “Why bring donuts when you can bring breakfast tacos to work?”

“In Austin, Texas, everybody eats breakfast tacos … We’re trying to grow that business and get people used to it. We’re finding a lot of law firms and this HR software development company are buying lots of breakfast tacos and bringing them to their folks on Saturdays or Fridays and such. We’re having to train St. Louis on this great thing (breakfast tacos) not being sweet and sugary. Seems like we’re doing well in that,” Eller said.
Whether one is looking for a unique lunch or a savory breakfast, it’s worth a stop at Kurt Eller’s taco enterprise.