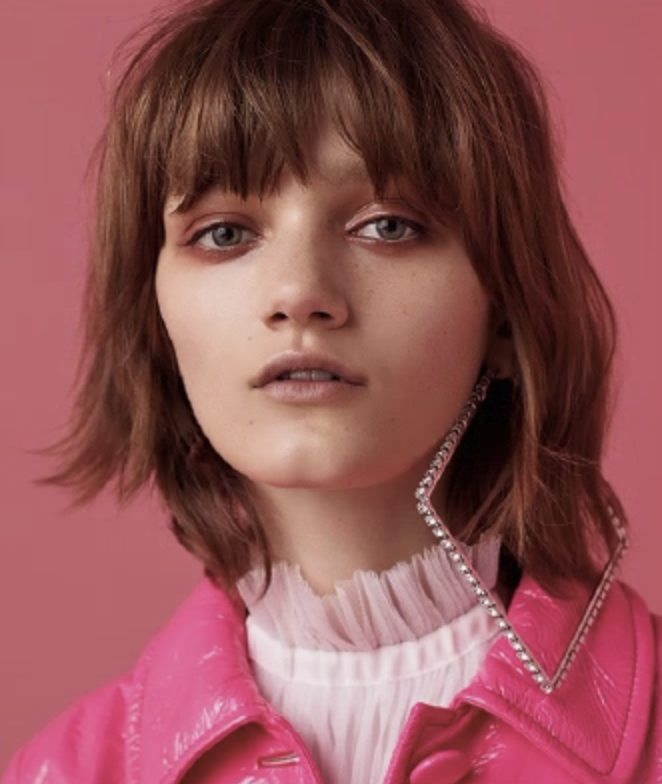 “Our agency had a dinner right before we started fashion week and we were just a whole crop of newbies. The vice president of our agency was just saying, ‘I know there’s a lot of you here, but maybe two or three of you will have a good season and that’s just realistic.’ It ended up being me and one or two other girls who actually had a pretty decent season,” Peyton Knight said.

Knight, who attended school in Clayton School District from the elementary level to eighth grade, began her career as a model over eight years ago, and since then, has risen to be one of the most visible models in the industry, gracing over 20 magazine covers.

“I was scouted when I was 11. I had gone to the movie theatre with my mom and we didn’t see this table but there was an agency from New York called Elite that was sitting there. Ronnie’s theatre is one of the most trafficked by young teenage girls and so they set up camp there. One of the scouts came behind me and my mom and tapped us and was like, ‘would you guys be comfortable coming in and filling out an info card? We’d love to sign you.’ So I signed with Elite and then switched agencies to IMG when I was 13,” Knight said.

At first, Knight explained, modeling for Elite was not necessarily work, but more of a hobby which she would pursue during her free time. However, as she got older, her commitment to the job increased, and it became clear that her passion for modeling made it a viable career path for her. At just 15, Knight’s agency flew her to Japan for six weeks for shooting opportunities, an experience which allowed her to discover other cultures and encouraged her to work even harder to pursue her dream.

“The first year in modeling I traveled over 150,000 miles. I went to Japan for six weeks and within that time I really got to explore the temples and famous geographical spots like Mount Fuji and go and see all of the most popular things to do in Tokyo and that was really exciting. I’ve been all throughout Europe,” Knight said.

According to Knight, both of her parents were unfalteringly supportive of her career as a model, as long as it remained a dream that she hoped to pursue. Her mother Allison Knight agreed.

“We’ve always been about her following her dreams,” Allison Knight said.

Consequently, her parents were on board when Knight decided to graduate high school two years early in order to become further invested in her career at IMG.

“When I transferred from Clayton to Kirkwood [in ninth grade] I had a full extra credit of language and then I also doubled up on English in my senior year, so I’d take two English classes every single day for the entire year. And I’d take online classes. It was convenient. I mean, I liked school as far as learning and everything and it was a really fun time for me because I was also on dance team, but I kinda wanted to just start in the world and get it going. I had this opportunity that I’d been waiting to pursue full time since I was 11. So it was a long time coming,” Knight said.

Although, Knight said, it is very difficult for a young woman to make it in the modeling industry, she had few doubts about her own ability to remain strong, persevere and succeed.

“There’s always the chance that something is not gonna work out for you. I mean you could want to be a rocket scientist but if you don’t put in the hard work to get there, you know, you’re not going to be a great rocket scientist. I had always stayed really dedicated to my passion and what I wanted to do. I was working out and eating healthy and taking care of myself inside and out. I think that that drive is really evident when you’re working with people and they love to work with people who want to be there. So if you present yourself with that attitude you’ll make it so much further in anything you want to do,” Knight said.

Immediately following her graduation, Knight flew to Rome to walk for Chanel, an event which has remained one of the most memorable of her life.

“Chanel flew an entire show’s worth of girls to Rome for a pre-fall show when I was 17. So the first day that we got there we basically were allowed to explore the entire city all we wanted with everybody. Several of my friends were in the show too so we just got to go and see all the ruins. For the show itself they recreated a street in Paris with a train station and we all came up out of this train station and walked around through all these really cute shops that they had as the set. Then when the show was over all of the audience and all of the girls in the show could go to these shops. They would open up and they’d be like cheese places, cake shops, or fish markets, so it was supposed to be like this big street in Paris that was actually in Rome. That was a really cool experience that I’ll always remember,” Knight said.

Other unforgettable moments in Knight’s career include a shoot in Berlin where she sprinted across a pebble roof in six inch heels, or, in a similar instance, when she ran through an abandoned mall for a Gucci campaign video. Her job has also brought her into close contact with countless notable people such as the Beckham family, the Jenners, Anna Wintour (the editor-in-chief of Vogue magazine) and even the rapper Cardi B, for whom she is a self-proclaimed “fangirl”. In one particularly striking instance described by Knight, she was complemented by Lady Gaga.

“My first season [modeling] was a little bit intimidating because, you know, you would turn the corner and Hailey Baldwin would be getting her makeup done. At one of my first shows I was getting my makeup down right next to Lady Gaga and I was thinking, ‘oh my god, I’ve listened to you since fifth grade!’ but I didn’t want to say anything or act weird so I was just sitting there and then I was like, ‘you’re really beautiful!’ and she said, ‘oh my gosh you’re so beautiful too.’ I couldn’t believe that Lady Gaga had just said that.”

However, according to Knight, the shock factor of meeting celebrities eventually wears off, especially because one realizes that they are simply normal people. Even the modeling industry itself, she said, is not as glamorous as the outside world perceives it to be.

“[Modeling] is really not necessarily what people think it is. Like flying on a plane and trying to sleep is not very fun. And then going straight to work. I’ve flown in and immediately started shooting ecommerce, which is basically where you’re putting on 30 looks that day and you’re standing in the same position for 10 hours. I’ve flown in and gone straight to a job like that for two days straight with really bad catering. And that’s not fun. I ended up being kind of sick to my stomach after that experience,” Knight said.
According to Knight, her career can often be physically and mentally taxing, but she has never had to drastically change aspects of herself in order to succeed.

“I’ve never had to compromise anything like my education, my morals, anything … to be in this industry. And that’s really saying something. I’ve never been put into a situation that has been bad or negative, I’ve always enjoyed my job. Which I feel, you know, empathetic for people who go to work and they hate their job. I love my job, it’s a fun job at the end of the day. There are trying times and it is sometimes a struggle and I do have to work out and be mindful of how I take care of myself all the time, but it’s a passion,” Knight said.

Additionally, Knight commented on the idea that most models have an eating disorder or compulsion to exercise.

“There’s always been this stigma that models don’t eat, or they don’t eat enough, or they’re obsessed with working out, or this and that, and genetics play such a huge role in it. That sounds like such a lame excuse but it’s true. You can tell the difference between someone who is not eating and someone who is built extremely skinny, there’s such a difference. The quality of hair becomes so poor if you’re not eating, your nails fall apart, your skin gets really sallow, you get really dark eye bags … all the signs of an eating disorder are very apparent. It really breaks my heart when I see friend of mine who are definitely skinnier than I am getting ridiculed online because people will tell them that they’re anorexic, putting this label on them,” Knight said. “When I very much see these girls go and eat plate-fulls of pasta and eat normal foods and do normal things but their make-up and their metabolism are just so different from a lot of people. It is heartbreaking to see girls who [do have eating disorders] because it does happen, it’s not a complete fallacy, there is that in the industry … but those girls don’t make it. Those aren’t the ones that you see on the runway as much. They’ll have a good season or two because they’re skinny and whatever but they fall apart mentally and physically, they just disintegrate. The agencies will drop you or they’ll get you help quickly.”

Knight maintained that although she sometimes receives hate through her social media page, and even criticism on her body and appearance, her upbringing and passion for her job have helped her to develop a thick skin.

“It’s just kind of keeping strong all around and focusing on what you want,” Knight said.