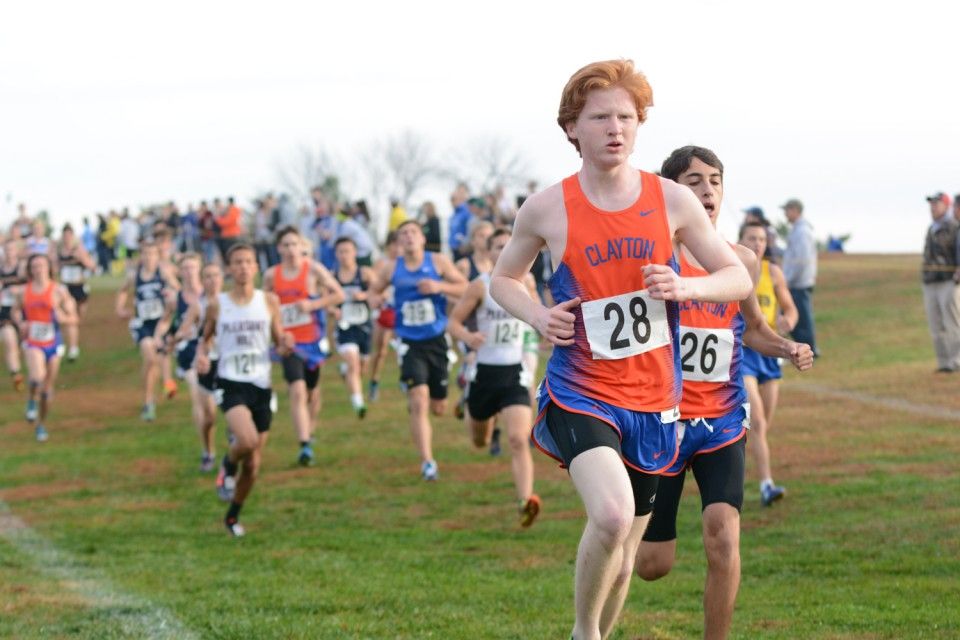 Isaiah Hayward (28) competes at the 2016 MSHSAA XC State Championships in Jefferson City. Behind Hayward is fellow CHS runner and senior Justin Guilak (26), as well as Class of 2017 graduates Lucas Hoffman and Krai Gund.

CHS Senior Isaiah Hayward uses his story of determination and success to inspire others.

Every summer, students entering 9th Grade Honors English at CHS receive an assignment to complete before the start of school. The summer before Isaiah Hayward entered 9th grade the assignment was to read “Unbroken,” a novel about Olympic runner Louie Zamperini and his experiences as a soldier in World War II.

“Reading ‘Unbroken’ really inspired me to run the mile in track,” Hayward said.

Eager to prepare for a successful spring track season, Hayward decided to join the cross country team during the fall of his freshman year.

“I was the slowest person on the team. We had a two mile time trial in the first couple weeks of practice and I was so slow and out of shape that they pulled me out. I was the only kid who couldn’t finish the two mile. It was pretty embarrassing,” Hayward said

Hayward, however, made sure to not let that incident derail him. He used the embarrassment and failure he felt as motivation to improve and become the best runner he could be.

After only one year on the JV cross country squad, Hayward noticed significant improvement and was one of the top runners on the team.

During the four month hiatus between the cross country season and track season, Hayward continued to run on a daily basis and set a goal of running a mile in under five minutes for the upcoming spring.

Although Hayward did not achieve his goal during his freshman track season, he continued to work hard and remained determined to improve his times.

Unfortunately, soon after he got to Cambridge, Hayward suffered a foot injury that sidelined him for most of the cross country season. Despite the injury, Hayward was determined to be ready for the indoor track season.

“I stayed focused and went out on bikes and would swim and get in any exercise I could. I stayed mentally strong,” Hayward said.

His dedication and hard work paid off. Hayward was ready to compete by the time the indoor season began. And he loved indoor track.

“Indoor track has been my favorite type of running. The meets were very fast, and the tracks were indoor so it was quick pace and there were dudes falling over that you had to jump over. All the races were super tight,” Hayward said.

In Cambridge, Hayward improved immensely. His team ran in one of the most competitive conferences in the state, and the tough competition inspired Hayward to work even harder. His time in Cambridge proved to be beneficial to his running career.

Upon Hayward’s return to CHS and the track program this year as a senior, he has received a warm welcome from his teammates.

“I was well received,” he said. “Maybe better than I deserved; I felt like the Prodigal Son.”

As Hayward is now the top runner in the program, other runners on the team look to him as a leader and motivator.

“He has been a great leader in bringing back his work ethic. He was not that fast freshman year but he made himself fast by constantly training and having great discipline. He helps make sure that runners are always putting forth all their effort,” teammate Andrew Wang, a CHS senior, said. “He comes in everyday and works hard, and people on the team notice his great work ethic and look up to him because of that.”

Even though Hayward has only one year left at Clayton, he is still focused on leaving a legacy behind in the program. He hopes to create a relationship with the cross country team at Wydown Middle School and periodically run with the team and teach the middle schoolers about running and what high school is like. Hayward hopes that as a result there will be faster runners and that he can help facilitate an easier transition from middle school to high school.

Wang said, “[Hayward] helped me realize that if you put in hard training and are really dedicated, anyone can become a great runner.”