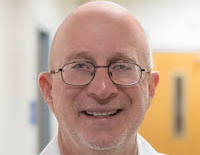 Brad Bernstein, School Board Director, is up for reelection this year.

“Simone was a slow reader. I got involved– in ’98, I ran for the school board, passionately advocating smaller class sizes, meeting the needs for kids in the middle, teacher evaluation, nutrition, parent-teacher conferences at the high school, and resource allocation. My campaign and service revolve around what every respectful speech includes…. and that’s passion.”

Brad Bernstein has been involved with Clayton first and foremost as a student. He admits he was never the best– he graduated with a 2.8 GPA, but the journey afterward was eventful. He joined the navy, he got a degree in chemistry from Washington University, he became an anesthesiologist, a faculty member, and a teacher afterward. However, he has also been involved with the school board since 1998. All three of his children (Simone, Jake, and Sophie) have graduated since then, but he hopes to see his grandchildren in the Clayton district as well. While the main objectives of his campaign have changed over the years, he explains that the high rigor at which he approaches each issue has not.

“The board has four main rules: one, the superintendent, hire and evaluate, make sure we have a strong leader. Number two–academic achievement and excellence. Ensure that all of our students reach their highest level of success. This is not just what college our children matriculate, but eventually, be good citizens with a happy and successful life. Three, fiduciary responsibility. Not only are we stewards of our children, but we are also stewards of taxpayers money. More is not always better. As many of you know, I do not support the increase on the tax levy this year. I do not support Proposition E or the rollback of C. My experience with sound conservative financial management on this board is a voice that absolutely needs to be heard. Shared vision, number 4. Our finger must always be on the pulse of this community. Always connected to all of our students and representing them,” Bernstein said in his opening statement at the “Meet the Candidates Forum” on March 26th.

While the three candidates do share a few beliefs in common, Bernstein is set apart in one way by his position on voting to have a student on the Board of Education in upcoming meetings.

“The shared vision’s a big picture, and the shared vision is parents, students, faculty, staff, any stakeholder– I think it’s important we all have a shared vision, so how do we define that? Should we have a teacher on the board? Should we have an administrator on the board? I think we have avenues right now that allow input,” Bernstein said. “There are so many areas where we can get input from members of our community. They all have a chance to present something to us, I think that’s very important. The MSBA legally does not endorse this yet, they are not for or against it, I think it’s a big step. To say would I vote on it right now? I think the answer would be with some development, what is the best way to get student input?”

Bernstein says his answer remains “maybe.” If he was asked to vote tomorrow to have a student on the board, he would vote no, but with some consideration, he would look into further avenues for how to integrate students’ voices into the Board of Education.

Bernstein is also the only candidate out of the three who does not support Proposition E, the increased tax levy for current residents within the School District of Clayton. When asked about his position, he explained that he believes that they clearly have not done an objective analysis to try and control their expenses, or made any effort to maximize expenses. He also believes that Proposition C should not be connected to E, and that board members themselves do not have a clear idea what C entails.

In regards to the claim that the last operating levy increase in 2003 was only supposed to last a few years but lasted for sixteen, Bernstein said, “I was on the board in 2003. We absolutely did not say it would last three to five years, we did not say that. The prior tax levy was 20 years before that. For similar districts, there were 19 years in between each one. So 3-5 years is in fact, not true.”

However, Bernstein, like many others, believes student safety is paramount. As a proponent of gun control, he believes guns should not be anywhere near or around a school.

“There’s no way we can defend any weapon that can harm anyone in our school system,” he said.

He also has two top funding priorities, which he believes a levy is not needed to achieve. He wants to look beyond the tax base to grants and volunteer opportunities to fund these goals.

“One: to give our students the tools to succeed. This includes our outstanding facilities, access to technology, academics, athletics, the arts, etc. We have to invest in the whole child. This includes character and physical education and of course academic excellence. Two: our most valuable resource is our faculty.  We need to continue to offer a competitive compensation package and to make sure our educators feel appreciated. This must include an evaluation plan that is student-centered,” Bernstein said.

Being an average student himself, Bernstein realized that he didn’t get as much attention as higher and lower performers. He believes more resources are needed for average performers, and mobility for all students, as many in the gifted or lower performance sector tend to remain there.

Bernstein also has concerns with the level of transparency within the Board. Like Siwak, he wishes to live stream meetings, but he also wants to be more transparent with numbers. He discussed in his closing statement the misleading nature of numbers and figures.

“Numbers can be easily manipulated. If we share how we come to specific conclusions, more people will understand how the conclusion was reached,” Bernstein said.

However, Bernstein’s most important goal is advocating for every child. He compares the current system of quantifying academic success to the story of blind men describing an elephant– essentially, one point of measurement doesn’t tell the whole story.

“A “C” grade for one child may indicate success. A “C” for another may indicate a problem; possibly family, social or too much drinking or partying. But by continuing to have smaller classes, we have the ability to celebrate a “C” or look for counseling,” Bernstein said.

When asked how Bernstein plans to build consensus within the community over the district’s work, his answer was that consensus is overrated. He hopes the community can understand each other’s’ beliefs, thoughts, and feelings. He wants consensus over disagreeing on topics, which he believes can be accomplished through passionately, respectfully and diligently discussing as well as actively listening to topics, both educational and in the broader world.

“We are a team, team Clayton– we can’t always agree, and that’s okay. That is good. I mean, I’m not going to be able to go have a beer with every one of my fellow board members. Many of you know I do not agree with Proposition E. I will own what I believe as the best interest of this district. No exceptions… I will listen. I will discuss… We want our kids to follow their talents to achieve their maximum potential.”