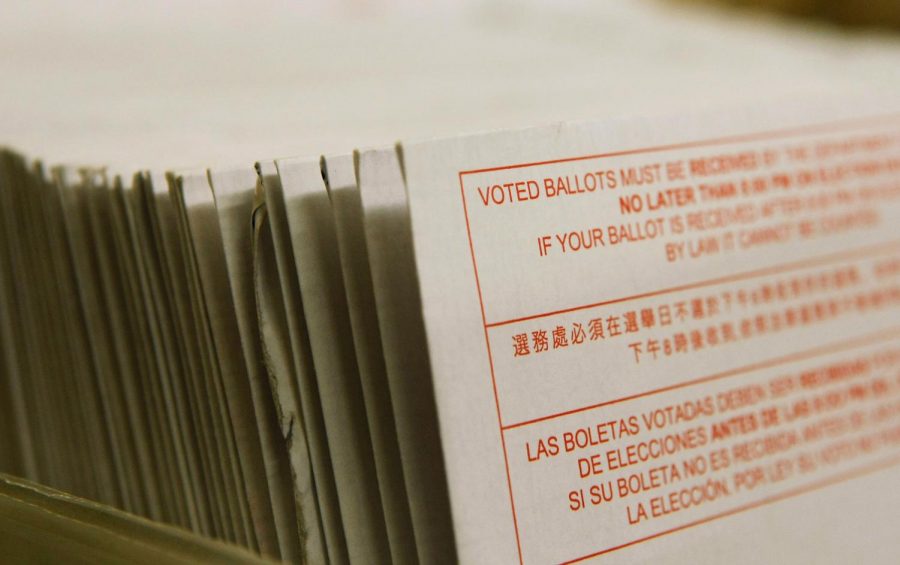 Vote-by-mail ballots at the San Francisco Department of Elections in 2008. COVID-19 has made absentee voting a pressing issue this year.

Missouri and the rest of the nation grapple with poll worker protection, absentee voting, and partisan divides over elections

Just like every aspect of society, upcoming elections in the St. Louis area will look very different this year. June 2 is the municipal election, pushed back from the originally-scheduled date of April 7, followed by the presidential primary in August and the General Election in November. Eric Fey, St. Louis County Democratic Director of Elections, explained that several precautionary measures will be taken in an attempt to ensure safe in-person voting this June: “The poll workers will have masks and face shields, and they will have wipes to wipe down the pens and the stylus that voters use to sign things and fill out their ballot. And then we’ll have markers on the floor to try to enforce social distancing. And then there’ll also be hand sanitizer available for all the voters for them to use.” But many St. Louis residents may still not feel safe going to a physical polling place, and that’s where absentee voting comes in.

In light of the current COVID-19 situation, several states have moved to make voting by mail easier despite attacks from the Trump administration claiming that mail-in voting is fraudulent and puts the Democratic party at an advantage. President Trump has tweeted threats to withhold federal funding from Michigan and Nevada for “illegally” expanding mail-in voting.
According to the New York Times, 11 of the 16 states – Missouri included – that usually limit mail-in voting have eased restrictions due to the pandemic. For example, Rhode Island’s governor issued guidance on April 10 specifying that all voters confining themselves due to COVID-19 may vote absentee under the excuse of physical disability. States like Virginia, New Hampshire and Texas have taken similar measures to expand absentee voting without restricted excuses.
Missouri law mandates that voters must specify one of six reasons to request an absentee ballot, one of them being “incapacity or confinement due to illness or physical disability.” But whether that excuse includes self-quarantining due to the coronavirus pandemic has become a heated topic as the state gears up for elections in the coming months.

When asked whether stay-at-home orders justified expanding absentee voting options at an April 14 press conference, Governor Mike Parson called absentee voting a “political issue” and said there would be time to address voting issues later in the year. Secretary of State Jay Ashcroft also refused to interpret the absentee voting law. That means the interpretation of the absentee voting excuse is left up to local election authorities until statewide legislation recently passed by Missouri legislators becomes law.
Rick Stream, the Board of Election’s Republican Director of Elections, explained that as of late April there had been no official determination on the issue from the Governor or Secretary of State, and that St. Louis County voters should only check the “incapacity or confinement” box if they have a health condition that prevents them from voting in person. “If they want to check box number two, which is the incapacity and disabled box, we don’t go out and check people to see if they were actually telling the truth on that,” Stream said. “[…] Our position is, if you qualify under the existing law, check a box. If you’re not sure, then it’s your decision.” Fey added, “We’re just encouraging anybody who feels like they qualify for absentee voting to do it.” The Board of Elections also sent absentee ballot applications to every voter over 60 in the area, reminding them of the option to vote absentee if they qualify.
On April 17, the American Civil Liberties Union, ACLU of Missouri and Missouri Voter Protection Coalition filed a lawsuit against the state of Missouri, Secretary of State Jay Ashcroft, City of St. Louis Board of Election Commissioners and others. The lawsuit petitioned the court to grant absentee voting eligibility to Missouri voters who are quarantining because of coronavirus. An ACLU press release called refusal to provide an absentee voting option for people staying at home due to COVID-19 “a violation of the right to vote under the Missouri Constitution and the state’s voting laws.”
Tony Rothert, Legal Director of ACLU Missouri, explained the basis of the lawsuit. “Our view and the view of some election authorities in the state […] is that what we’re doing right now, what I’m doing right now, confining myself because of an illness, would qualify as a basis to get an absentee ballot,” he said. “So that’s really what we’re asking the court to do, is just to say that the law already allows people who are staying at home to avoid the risk of spreading or contracting a virus to vote by absentee ballot.”
On May 18, the lawsuit was overturned by Cole County Circuit Judge Jon Beetem, who claimed the plaintiffs were attempting to permanently alter the Missouri voting system. The next day, they appealed to the Missouri Supreme Court.

“Trying to suppress votes is nothing new in Missouri.””

Rothert predicted what might happen if absentee voting wasn’t made a more accessible option. “Trying to suppress votes is nothing new in Missouri,” he explained. “[…] So if the virus can be used as an as an excuse to tighten up and to make people have to choose between risking their lives and other people’s lives and voting, it’s likely to make voting go down. There’d be a suppression of votes.”
And in late April, Fey explained that he didn’t anticipate much change in Missouri voting laws, because Missouri legislature is generally “reserved in exploring different types of voting methods,” as he put it.
But Fey also mentioned that if the issue of absentee voting were to be taken up by the state legislature, it could lead to “relatively substantial change.”
On May 15, Missouri lawmakers sent a bill to Governor Parson stating that voters who are vulnerable to COVID-19 – those over 65, in a care facility such as a nursing home, or with pre-existing health conditions – are permitted to vote by mail without an excuse. All other eligible voters may do the same, but are required to get their ballot notarized. The legislation is now waiting to be signed or vetoed by Governor Parson.
Despite the passing of the bill, there has been criticism from both sides. Some Democratic lawmakers have argued that the notarizing step for voters who aren’t at risk defeats the purpose of voting by mail, and the ACLU Missouri released comments from organization officials who said the new legislation is a good first step, but there is still work to be done. The bill has also been met with concerns over election security from Republicans.
Though it’s hard to predict whether the steps being taken in Missouri will be enough to keep elections safe, we do know that this election cycle is a critical test of whether the American democratic system can adapt to meet the needs of its people during an unprecedented situation.