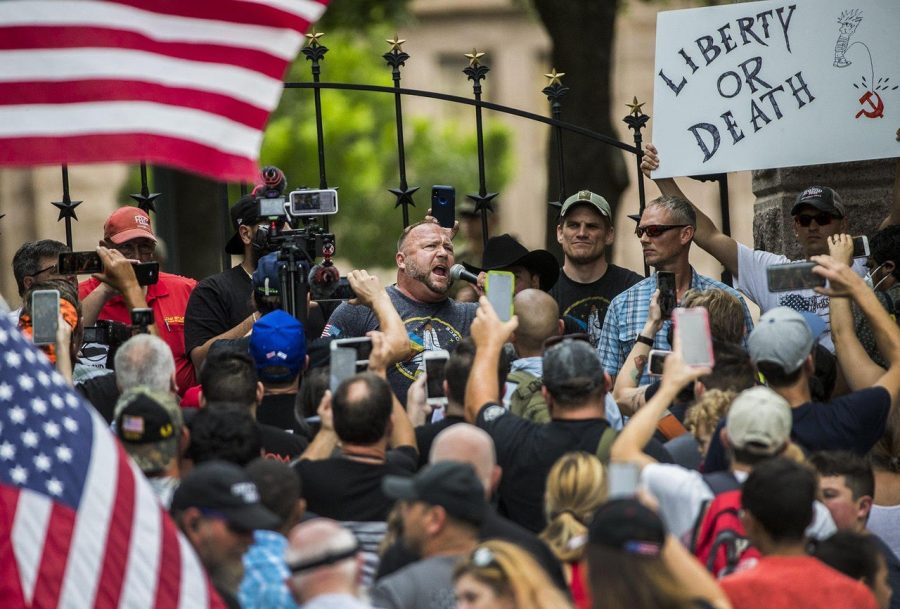 With “My Body, My Choice!” and “Models are Wrong, Open MO!” signs in hand, around 60 individuals protesting Missouri’s stay-at-home order converged on downtown Clayton on April 21. Some gathered openly in groups, failing to remain six feet apart, while others drove in loops through deserted streets.
Wydown Middle School Social Studies teacher, Mark Solomon was on a bike ride with his family when he encountered the protest.
“There were cars circling, and there were people with liberty signs, Gadsen flags, American flags,” Solomon said. “And then there were groups of people, maybe two dozen or so, standing and holding signs. What’s weird about this, though, is that most of Clayton was empty. The restaurants were closed, the stores were closed, there wasn’t really a counter protest at all. It felt weird.”

Although the outcry in Clayton felt almost surreal to Solomon and his family, it wasn’t an anomaly. That same day, several hundred others arrived at the front steps of the Capitol in Jefferson, bringing their concerns directly to Governor Mike Parson. Other states, such as Michigan, have witnessed similar events over the past several weeks.
While many might have a preconceived idea of the views, political standpoints or race of these protesters, Solomon said that the crowd in Clayton was diverse.
“There were some older minivans and pickup trucks. There were also some nice SUVs. There were young people. There were older people. There were people of color. So it wasn’t homogeneous, which might have been my perception,” Soloman said.
When searching “quarantine protests” on the Internet, the first images to appear are tightly packed groups of middle-aged white Americans, festooned in flags. While that is certainly the reality in many locations, New Jersey resident and daycare owner Jerry Shiavo said that it fails to represent the non-politically charged views of a large subsection of those who oppose the stay-at-home order.
“I would prefer, if you’re trying to make the point that you don’t agree with the lockdown, and you’re responsible, something like what they did in Michigan, where they had a protest in their cars,” Shiavo said. “It shows that, ‘Hey, we’re responsible, we understand, we’re not trying to spread a disease. We just want you to open things up.’ If you go out running around and giving high fives with no masks on, it just adds to the idea that these people can’t be trusted.”
Shiavo is currently quarantining with his wife and three young children. Along with the daycare that he and his wife own, Shiavo works in the car business, which, unlike his other job, has slightly reopened and provided a small source of income. Still, caring for his children and managing work has been a challenge.
Although Shiavo initially supported shutdown measures that were put in place before much data on the virus’ progression was available, he feels that current restrictions are putting excessive pressure on the economy.
“They’re talking about food shortages because certain plants are being closed,” Shiavo said. “So, what happens for lower income families that can’t afford certain types of food, and now the food that they used to be able to get is not available? It comes to a point where, unfortunately, you have to weigh the options. By opening up, are we going to lose 30,000 people? But if we don’t open up, are we going to lose 40,000 people and seven trillion dollars? I think that’s the difficult point.”
Shiavo is particularly concerned at the selectivity involved in choosing which businesses may or may not be open. He feels that allowing some central locations to remain open may actually be counterproductive due to the larger concentration of customers that will be shopping there at any given time.
“You can go to a Walmart to buy children’s clothes, but you can’t go to a boutique store and buy clothes there. That’s not safe, but a Walmart is safe because they happen to sell food. It just seems like larger corporations have gotten a lot of passes on this, whereas small businesses, which don’t have as much of a voice, they’re not getting that pass,” Shiavo said.
Michael Holley, a St. Louis-based salesman, shares similar concerns. He makes his income based on performance, or how successfully he is able to sell certain products to businesses. Holley is also a 1099 employee and an independent contractor, meaning that the closing of businesses due to the virus has impacted him and other such employees greatly.
“I sell to businesses. The businesses aren’t open right now, so I don’t make any new money,” Holley said.
Instead, Holley, like many other 1099 employees that are ineligible for unemployment benefits, must rely on his savings. It is partially because of this struggle that he believes the threat quarantine poses to the economy is more severe than the impacts of the virus on human health.
“The economic impact that [the stay-at-home order] is going to have on the US, individual states and other counties is going to be far greater than the impact the virus is going to have on the population,” Holley said.
Holley also believes that even those whose careers have not been drastically affected by business closures will eventually feel the impact of the economic downturn in the form of disrupted supply chains. “If [the order] continues to go on further, then it is going to directly impact our food supply chain, or just our daily necessity supply chains,” Holley said. “I think we’re at a point now where we have to start looking at opening up our areas for business because if we don’t, not only will people start losing their jobs, but it’s going to fall over into being a food issue and a necessity issue.”
In order to reopen businesses and mitigate damage to the economy, Holley suggests assessing the virus county by county rather than state by state. He used the example that a mere five counties surrounding Chicago are responsible for 40,000 of Illinois’s 45,000 total cases (as of our interview in late April), as is similar with counties surrounding St. Louis. He also believes it is unnecessary for the state to shut down businesses in counties that have no reported cases.
Even as businesses start to reopen, Holley agrees with many experts who believe recovery of the market will be a much longer process than its downturn, especially if stay-at-home orders proceed.
“I really don’t think the economic impact of [quarantine] is going to be felt or recovered for years, not to mention if you add another four to six years on top of that,” Holley said.
After the economy fully restores, Holley subscribes to the idea of an inevitable “new normal” that can be compared to the changes in airport security post 9/11 that remain in place today.

I don’t think we’ll ever get back to where we were before this started.”

“People talk about getting back to normal. And I don’t think we’ll ever get back to where we were before this started. There is definitely going to be a new normal. It’s going to be something completely different than we’re used to.”
Moving forward. Shiavo stressed the importance of entertaining other points of view and remaining open to the idea of an informed debate.
“I might be wrong on a lot of what I’m saying right now, and someone else who disagrees with me, he might be right on more points,” Shiavo said. “But if I can’t talk to them and they can’t talk to me without relying on pure emotion and disregarding logic, I don’t think we’ll get anywhere.”