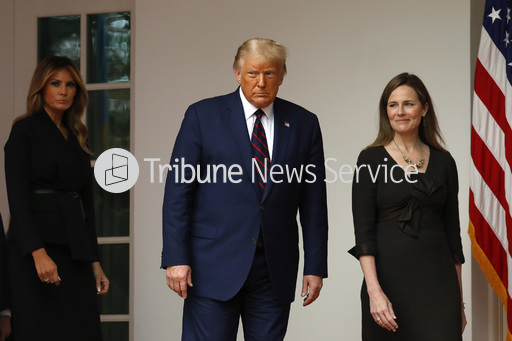 Amy Coney Barret: The Tipping Point in the Supreme Court

As the election approaches, due to the contrast in the candidates, there is a certain degree of significance that has become associated with the outcome. However, regardless of who wins the presidency, the democrats will have lost in the supreme court.

Almost a month after the death of Ruth Bader Ginsburg, the supreme court welcomed its newest member: Amy Coney Barrett. A lifelong conservative and strongly pro-life, her nomination cements a strong conservative majority which will likely last for many years.

However, perhaps what democrats are most concerned about is the future of Roe vs. Wade. The 1973 court case established the constitutional right to an abortion, but its future is now under serious threat.

Though Barrett has never explicitly stated her opinion on the issue of abortion, she has repeatedly shown support for anti-abortion groups and in 2006, while she was working as a professor at Notre Dame, she signed an advertisement which condemned the “barbaric” legacy of Roe vs. Wade. These actions outline a clear opposition to abortion, indicating Barrett’s addition to the court may only further endanger the future of abortions in America.

Even without Barrett’s addition to the court, anti-abortion sentiments continue to brew, with a total of seven states already prohibiting abortions after the detection of the fetal heartbeat. Meanwhile, several anti-abortion groups have advocated for the outlawing of abortions entirely or the implementation of severe restrictions concerning abortions.

These actions stand in direct opposition to the precedent set by Roe vs. Wade, and although they are gaining support among some, it remains highly unlikely that such extreme changes would take place at a national level. According to a survey by Gallup, about 80% of Americans stated that they support abortions in at least a few specific scenarios, so while there may be a wide range of opinions surrounding when one should be allowed to have an abortion, there appears to be a general consensus that abortions should be legal in, at the very least, certain situations.

Though the end of abortions is nowhere in sight, drastic changes to abortions appear to be right around the corner, with Amy Coney Barrett leading the way to the end of Roe vs. Wade.”

The landmark supreme court case of Roe vs. Wade has been contested since the day it was brought to the court back in 1973, but this time it faces an entirely different challenger. Nominations for supreme court justices are few and far between, but they each hold immense power, with those nominated serving for life. Barrett’s nomination, which occurred in the midst of an ongoing pandemic and directly before a presidential election, is something that can not be rescinded. She will continue to serve in the court for multiple decades, with her power extending far beyond that of any president.

Her presence poses a large threat to an issue that is already surrounded by imminent danger, and with a strongly pro-life court now in place, one can only begin to wonder how much longer Roe vs. Wade will stand as it is. Though the end of abortions is nowhere in sight, drastic changes to abortions appear to be right around the corner, with Amy Coney Barrett leading the way to the end of Roe vs. Wade.