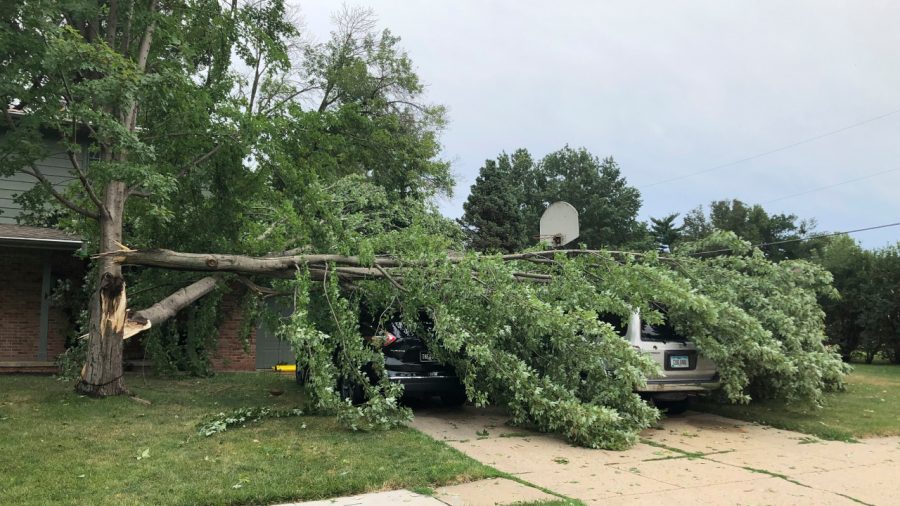 A tree fell across vehicles at a home in West Des Moines, Iowa, after a severe thunderstorm moved across Iowa on Monday Aug. 10, 2020, downing trees, power lines and damaging buildings.

“I remember thinking, yeah, this is the Midwest, it will pass in 15 minutes and it’ll be fine,” said Katie Bell. Little did she know, that in August of 2020 Midwest a derecho would leave her without power for four straight days.
Derechos are severe weather storms which are categorized by fast-moving and highly intense windstorms. On August 10th and 11th of 2020, the derecho took over the Midwest, specifically in Iowa but also impacting areas in South Dakota, Nebraska, Illinois, Wisconsin and Indiana.
The storm lasted approximately 14 hours with the peak wind gust measuring 126 miles per hour and approximated gusts reaching 140 miles per hour. Because of the raging winds, 21 tornadoes were confirmed in rural areas and there were four fatalities due to the storm. The estimated damage cost left by the storm is 7.5 billion dollars, that includes damages to residential and commercial property, agriculture, public utility infrastructure and more.
Bell was in her Pure Barre workout studio in West Des Moines, Iowa, when all of her clients began to cancel. She recalled looking out the front window of the studio and seeing the sky grow dark very quickly. After it was safe, Bell left to return home, only to find streets riddled with tree limbs and powerlines knocked out by the winds.

It’s led to a lot of continued consequences for people.”

“It’s led to a lot of continued consequences for people. We were just finally able to get our fence repaired [around the beginning of November]. Roofing companies, fencing companies, companies like that have been extremely backlogged,” said Bell. “My husband is a general surgeon and he and his partners have had to fix a lot of hernias for people that were caused by them trying to move tree limbs.”
While many people think about the consequences of major storms, 2020 brings its own set. Due to the coronavirus, many families had stocked up on food and supplies. With the lack of power, and therefore the lack of refrigeration and freezing, food spoiled quickly, causing an even greater amount of loss.
The intensity and frequency of storms have increased over the past fifty years. According to the National Climate Assessment, there has been 71% more heavy rain since the 1950s. Many scientists attribute this to global warming. As the average temperature rises, more water evaporates from the oceans and heads into the atmosphere. In turn, this causes more atmospheric moisture for storms to use as rainfall and higher intensity storms.
Bell, living in the Midwest her whole life, said “I’ve never seen anything like it.”
Storms such as derechos will continue to rise in strength and intensity if there are not stronger efforts put in place to prevent global warming.