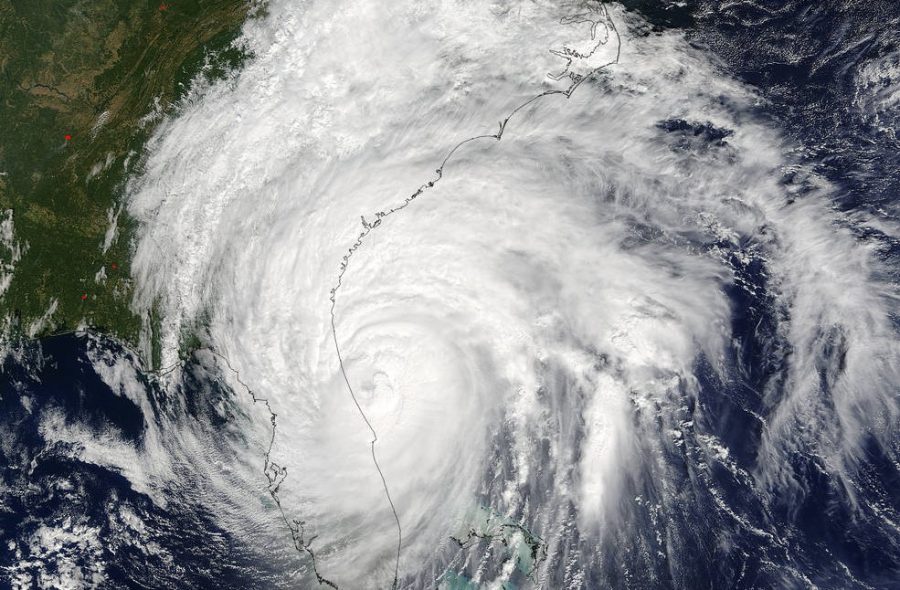 Satellite image of an aerial view of a hurricane.

$16.47 billion. That is the price of around 72,619 average United States homes. That is also the estimated amount of damage caused by Hurricane Matthew in 2016.
Hurricane Matthew hit the Southeastern United States in early October, 2016. Matthew made its fourth and final landfall in South Carolina as a category one hurricane.
Hurricane Matthew was classified as a category five Atlantic hurricane as a total of its impact around the world as it also hit areas near the Atlantic such as Venezuela, Colombia, Puerto Rico, Cuba and many more.
Donna Stubbs has lived in a small community about 50 miles inland from Myrtle Beach, South Carolina, for most of her life and has experienced a variety of hurricane storms. But Matthew was different.
“We were isolated. I’ve lived in this community for 70 years and this is the first time I’ve ever felt that way. All the roads were flooded around us and we could not get out for three days,” said Stubbs, “Just knowing for three days that I could not get out– that I couldn’t get out of a five mile radius– well that’s a scary feeling.”
Stubbs recalled that her and her husband, three weeks after Matthew, decided to head down the road to another small town called Fairbluff. When they got to a bridge that was over the river near their town, they saw a truck. Water was up to its windows… three weeks later.

The damage caused many people’s homes to be damaged. Stubbs said, “The people just left. They moved away, they moved in with neighbors. A lot of jobs were lost because of the flooding from Matthew.” Even four years later Stubbs will be walking around and “think ‘woah, there’s another house that they fixed!’”
Hurricanes, such as Matthew, tend to cause lots of flooding and wind damage. Similar to a derecho, hurricanes have been greatly impacted by global warming. The warming of the planet, causing the evaporation of water and therefore more rainwater, increases the intensity and frequency of hurricanes.
“We’ve had hurricanes all my life, until Matthew, I think 1954 Hurricane Hazel was the worst. I was 5-years-old and I can remember it. But, you had one maybe every five or six years back then. Since 1990, it seems like they just come more frequently and seem to be more severe,” said Stubbs.
Especially for Stubbs, her hurricane experience is unique. While most hurricanes impact areas near the coast lines, Stubbs lives 50 miles inland… meaning the ocean is not where they get the majority of their flooding from.
“The people on the coast expect to deal with hurricanes because of their location. As they rebuild, they are rebuilding to a different standard. 50 miles inland, not so much,” said Stubbs.