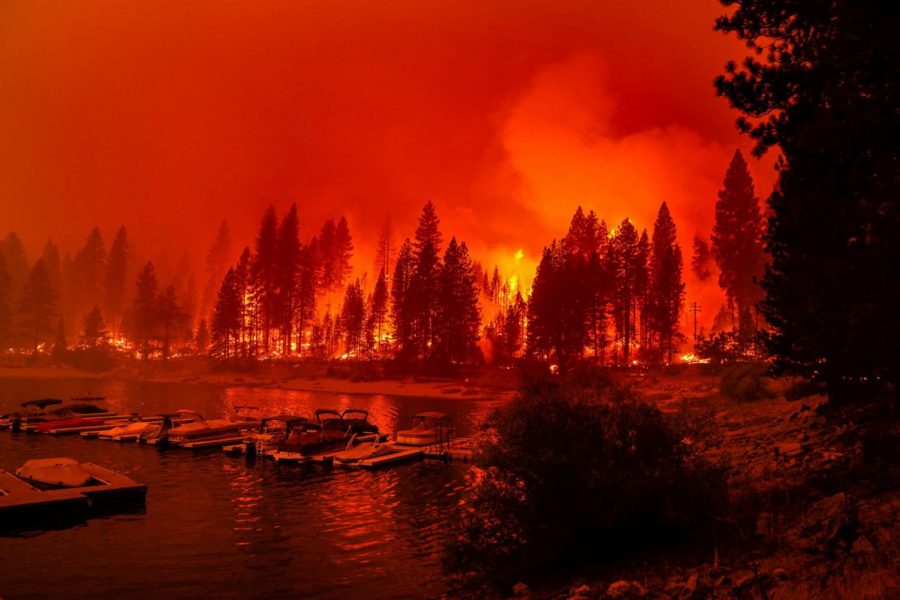 Firefighters conduct a back burn operation along CA-168 during the Creek Fire as it approaches the Shaver Lake Marina on Sunday, Sept. 6, 2020 in Shaver Lake, CA

“I remember waking up on the first day, here, in Boulder, where I could smell wildfire and I thought ‘Ugh, not again,’’’ said Rosalind Cuneo. Cuneo, after finishing her masters thesis on motivated reasoning in a climate affected population, moved from Seward, Alaska, to Boulder, Colorado in May of 2020.
In Alaska, Cuneo remembered seeing the sun turn orange and a grey overcast took over the skies for days. Her car smelled like a campfire for weeks during the Swan Lake Fire, so when she arrived in Boulder and the Cameron Peak Fire spread across the area, she was forced to face the infernal nightmare again.

Wildfires have destroyed more than 3.2 millions acres of peaceful landscapes and homes in 2020, causing apocalyptic skies in the western United States, driving out tens of thousands of people and animals, and causing billions of dollars in damages. One season of such destruction may be manageable, but what happens when natural disasters of this magnitude become a yearly occurrence?
While wildfires have impacted people’s lives in a variety of ways, including health complications.
“I got headaches and you feel like you have a cold and kind of sick. This year with covid, there’s an extra layer of; am I sick because of a virus or am I sick because there is smoke in the air?” said Cuneo.
The small particles from ash and wildfire smoke can cause burning eyes and worsen chronic heart and lung diseases… but it can also mimic symptoms of covid-19 including runny nose, scratchy or sore throat, headaches and other illness. Pregnant women, children, and those with asthma or heart disease are especially susceptible to the risks of inhaling wildfire smoke. In 2020, wildfires have added an additional anxiety because of the coronavirus. If a person were to get truly sick due to the smoke or ash, would it be worth it to risk going to a hospital?
In 2020 alone, more than 4.2 million acres of land have burned, resulting in at least 31 deaths and the damage and destruction of 10,488 structures. While the size of the economic dent the wildfires have caused is yet to be determined, experts estimate that the figure currently stands at $10 billion.
People and animals all over the country have been hurting from the pure destruction of the wildfires.
“… One thing the majority of people don’t hear about or see is the loss of livestock, horses and wildlife,” Shadow Creek Ranch near Silverthorn, Colorado’s General Manager, Buck McNichols said.
The victims of wildfires come in all forms, a large amount of which are deer, coyotes, elk, foxes, rabbits, cows, and horses. Thousands of cattle die each year from adverse weather, and while it is possible for animals to run away and seek shelter or be moved away by farmers, wildfires spread quickly and can easily trap both people and animals.
In recent years the increasing size and frequency of wildfires have sparked debates over the most efficient and effective ways to handle the consequences and implement prevention techniques, particularly in states like California and Colorado, where wildfires are more common.

McNichols said, “… our federal and state governments have neglected to properly manage the forests for decades and now are spending billions of dollars to combat these disasters from damaging life and property.”
McNichols hopes that if the government manages the forests, which entails clearing dead branches and leaves reducing the amount of flammable objects, it will limit such intense fires.
“We knew immediately that it was an issue for the ranch as it was incredibly dry and we hadn’t had moisture (rain or snow) in a long time,” said Shadow Creek Ranch Office Manager, Barb Kollar.
A variety of factors have contributed to the rise of wildfires in recent years, including increasing temperatures and changing rain and snow patterns. Dry soil, dead or dry vegetation, and a warmer climate increase the chances of a fire starting and spreading quickly as a result of lighting.
At a campaign rally in August of 2020, President Donald Trump said, “They’re starting again in California. I said, you gotta clean your floors, you gotta clean your forests.” The ‘you’ referring to state and local governments.
Of the 33 million acres of forest in CA, about 57% is owned and managed by the U.S. Forest Service or the federal Bureau of Land Management… meaning it is managed by the federal government. In comparison the local and state governments control only 3% of the forest. The same applies to a lot of the nation. Forests can be owned by the federal government, meaning the responsibility of preventing the fires does not only fall on the state governments as President Trump implied.
California resident Luigi Corbo also believes that taking more preventative action would be beneficial, saying, “We need to work towards managing (the fires/disasters) a little bit better. In California there needs to be more forest management. We know that we are going to have these fires come up, and maybe [we should be] clearing the forests, getting all the dead shrubs and dead trees out. We need to do that on a more frequent basis.”
While trimming dead brush and trees could offer a temporary solution, it is not effective in preventing or halting the spread of such fires. This method can even lead to unintended consequences such as exposing fire fuel such as dead leaves and pine needles to greater sun drying and wind penetration.

Making greater strides towards renewable energy will help reduce the risk of fires by lowering the stress on electrical transmission lines and reducing carbon-intensive energy sources. The energy that can be generated from solar panels, wind turbines, and small-scale hydro power plants does not produce greenhouse gases from fossil fuels which become trapped in the Earth’s atmosphere and contribute to global warming.
Oregon resident Richelle Corbo believes that it would be in the best interest of the United States to be leaders in the development of renewable energy sources. She also makes the point that it is important to consider the lives of miners and other workers in the fossil fuel industry.
“Our federal should not be supporting the fossil fuel industries, but supporting the innovation of new industries because it will create good jobs in this country for the future,” said Corbo. She believes it is understandable for people not to want to lose their jobs, and that these workers, as well as many others, could make the transition to high-paying jobs in the growing renewable energy industry.
Making strides toward renewable energy and even some shorter term solutions can help limit the impact, spread, and intensity of wildfires across the United States, but if we do not invest in long term solutions, the risks will only be exacerbated.
“As the weather warms, the conditions that lead to wildfires become more common and make wildfires more likely,” said Cuneo.