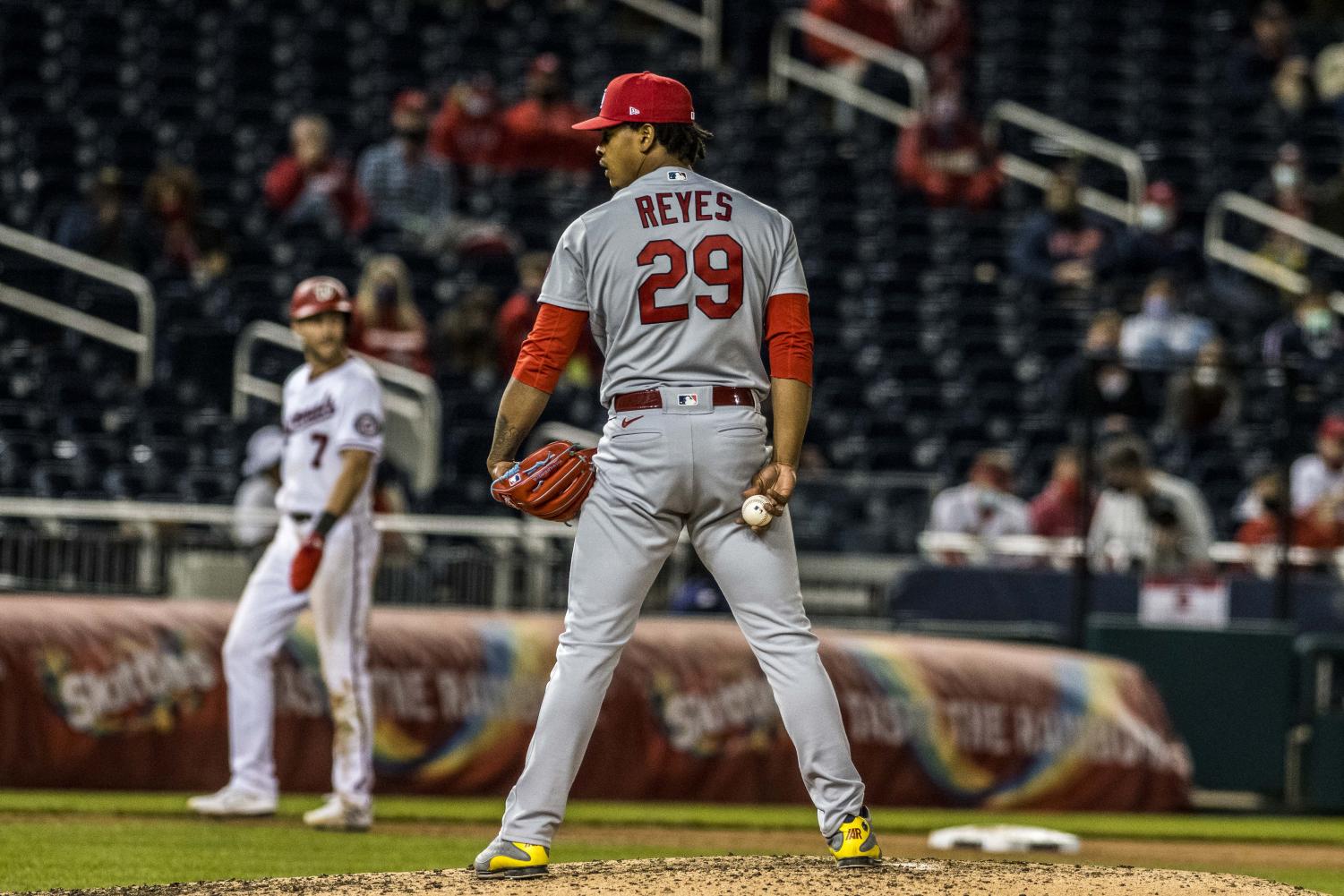 Cardinals reliever Alex Reyes on the mound at Nationals Park in Washington, D.C. on April 20, 2021. (All Pro Reels/Wikimedia Commons)

Cardinals reliever Alex Reyes on the mound at Nationals Park in Washington, D.C. on April 20, 2021.

Alex Reyes, the St. Louis Cardinals’ 27 year old closing pitcher, has been on a bumpy road for a while. Reyes made his Cardinals debut in August of 2016 as a starting pitcher and pitched 46 innings with a 1.57 Earned Run Average (ERA) in his rookie year. An Earned Run Average tells how many runs a pitcher lets up in 9 innings.
Unfortunately, Reyes didn’t start much after his first season due to many injuries, including a strained pectoral muscle and fractured pinky. Reyes had an ERA of 15 in his three games he played throughout the 2019 season. However, the previous couple years have been redemption seasons for Reyes, who held a 3.20 ERA as a reliever in 2020 and a 1.12 ERA in the first half of 2021. Reyes was breaking records, being the only closing pitcher to record 24 consecutive saves to start a career. He was selected to be in the 2021 MLB All Star Game in July.
Since then, he has been in somewhat of a slump. Reyes has an ERA of 5.02 since the break and a 15:10 strikeout to base on balls ratio.
The subpar stats are mostly due to games like on September 5th, 2021 where the Cardinals were visiting the Milwaukee Brewers. The Cards were hanging on with a three run lead when Reyes came in with the bases loaded and one out. Daniel Voglebach, the pinch hitter for the Brewers, took the first pitch as a called ball. The very next pitch, Reyes threw a fastball down the middle, and Voglebach hit a walkoff grand slam. That’s two pitches and 4 earned runs for Reyes, giving him an INF (infinity) ERA that game.
One might argue that he was put in a terrible situation. Bases loaded and only one out would be hard for any pitcher to get out of scot-free. However, there are several other examples in past games that can also be referenced.
On August 29th, 2021, Reyes was sent in during the bottom of the 9th when the Cardinals were visiting the Pittsburgh Pirates, arguably the worst team in baseball, sitting at a record of 48-83 at the time. Reyes came in and walked two of the first three batters. The 4th batter of the inning, Yoshi Tsutsugo, approached the plate, 0/2 that game. The first pitch of the at bat was once again right down the middle and was crushed for a walk off, no-doubter three run home run. Reyes threw eighteen pitches and let up three runs that inning, giving him a whopping 81 ERA counted for that game.
This typically only happens when Reyes is pitching while the Cardinals are in the lead. When the Cardinals are losing, Reyes performs like his pre all star game self, which leads me to believe this is a confidence problem.
“Confidence is currency,” said Benjamin Hochman, sports columnist for the St. Louis Post-Dispatch. If Alex Reyes can’t be confident, it’s going to be much harder for him to get back into his rhythm.
There is a long list of other players in sports history who have gone into a slump at some point in their career. Mickey Mantle went into a slump when he was in the minors. It was so bad, he wanted to quit baseball entirely. Mantle went on to have one of the best careers in baseball and become a 3 time MVP winner.
There are also many other Cardinals players that have been in a major slump. Johnny Peralta, Allen Craig, and Lance Lynn all had some pretty shaky starts to their careers. The three of them went on to have amazing futures with the Cardinals.
With the season coming to an end, the Cardinals have an important decision to make. Jordan Hicks, the Cardinals hard throwing closer who topped out at 105 mph, has been out with an elbow injury for the majority of the 2021 season, but he will be back when baseball starts up again next year. Where are the Cardinals intending to put Reyes when Hicks comes back?
Hochman thinks Reyes has what it takes to become a good starter. “When you look at his arsenal, all of his pitches, it’s elite,” He also mentioned that Reyes was a top pitching prospect. Hochman believes the Cardinals should give him a chance. Being a starter is “the way he was groomed.” He’s got “the starter stuff” Hochman said, but “the key with him is the word consistency.”
A good mindset is mandatory to become a good pitcher, and in the past few weeks, it appears Reyes’ mentality and gameplay have improved from what they were. The question is, will he be able to consistently keep it that way? I hope so, and Hochman agrees. “I have faith in Alex Reyes.”