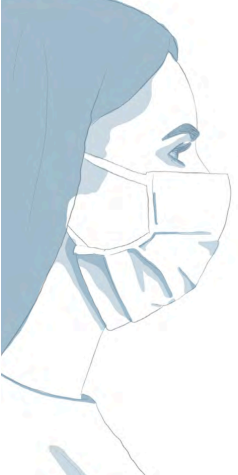 “Within a month, we lost our neighbors,” said Jay Epstein, Clayton parent and Lake Forest resident. Charles and Sally Kopman were long-time residents of Lake Forest and friends of the Epstein family. The two families enjoyed a friendly relationship, sharing the occasional dinner, picking up packages when the other family was out of town, bringing over cookies and enjoying neighborly chats during dog walks and yard work. The Kopmans took a particular interest in Epstein’s daughter, CHS sophomore Margot.

“They paid a lot of attention to Margot. She would bring them cookies and do chores for them. They were at her bat mitzvah,” said Epstein.

Just two weeks after the neighborhood progressive dinner, the last normal gathering for many Lake Forest residents, on a Thursday afternoon in late March 2020, Epstein entered the Kopman’s home to check on Charles. Epstein’s wife Deedee had seen him leave in an ambulance earlier in the day. The hospital had sent him home with an ambiguous diagnosis of weakness, as his symptoms were primarily neurological. The Epsteins tended to Charles for several days, helping his wife to ensure that he ate and drank and was safe, mainly from falling.

Eventually, his neurological symptoms worsened, and Epstein decided to send him back to the hospital. “They took him the second time back to the emergency room and he was pretty soon thereafter diagnosed with COVID-19. And died probably four or five days later. He died in the hospital, no friends, no family. One of his daughters came to town but she never, ever saw her dad again,” said Epstein.

His death was a shock to the Epsteins and the wider neighborhood community. The pandemic had just begun. People had yet to realize the death and destruction that were soon to come.

It brought to heart the seriousness of COVID.”

Approximately three weeks later, the Kopmans’ adult daughter alerted Epstein that her mother, Sally, was displaying neurological symptoms and confusion. Epstein called ahead to the hospital to ensure Sally would be admitted and properly cared for; not just sent home just to return a few days later, as had happened with her husband. No visitors were allowed during her hospital stay but her daughter and the Epsteins received updates about her status and care. Sally was nearing discharge after 10 days in the hospital, but died in her sleep the night prior to her scheduled discharge, as preparations were underway for her transition to home care.

“It was very emotionally traumatizing for all of us,” said Epstein. “And it brought to heart the seriousness of COVID.”

How the Pandemic Upended Death

Americans typically avoid death as a topic of conversation, placing it on the same plane as sex, money and religion. However, the pandemic has brought death on a large scale to the forefront of our collective mind, in a way that is nearly impossible to avoid. Millions of Americans have lost close family members and friends to COVID, or other causes, during the pandemic. 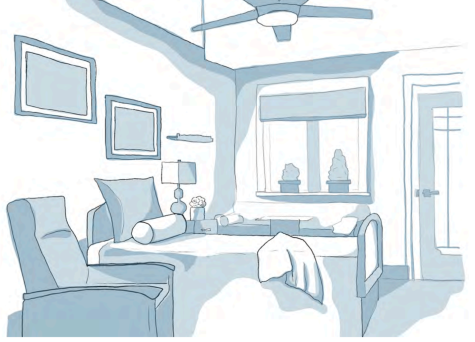 “It’s been hard to avoid. So it’s forced people to think about the end of their own lives. People are still uncomfortable with the topic in general but they are a bit more willing to approach it,” said Professor Brian Carpenter, Professor of Psychology at Washington University.

The pandemic has upended the typical end of life processes and circumstances around deaths. Social distancing requirements and hospital visitor restrictions, as well as restrictions on gathering sizes and locations impacted people’s last moments as well as grieving rituals. Many people in hospitals died alone, surrounded only by doctors as nurses, as well as loved ones on Zoom or FaceTime. Funerals were cancelled, postponed and held on Zoom or with limits on the number of participants. Mourners could not embrace, share meals or spend too much time in the same space.

“When people got COVID and died from it, it was not pretty. They were often in the hospital for a long time and were sometimes unconscious when they died. So these were really horrible, uncomfortable, distressing deaths to witness, both for family members but also the staff in the hospital,” said Carpenter.

Epstein also lost his mother in May 2020, and attended her funeral on Zoom. He described the experience as unsatisfying. “Improper goodbyes and not being able to grieve with your family is really difficult. There was no one to sit Shiva (a Jewish death ritual) for my mom, or for Sally and Charles,” said Epstein, “The whole feeling of being in the hospital, only having an iPad to talk to, not having anyone to hold you, not being able to say your last words in person, I think that’s one of the biggest tragedies related to COVID.”

Witnessing a poor quality death of someone that you care about is a bad thing for the people who are left behind.”

Preparing for one’s death ahead of time is one way to ease the discomfort and anxiety for both the person and their family members. Proper end of life care includes the skilled management of physical pain and nausea as well as attention to the person’s psychological and spiritual needs. End of life care teams range beyond just nurses and doctors and can include social workers, chaplains and religious leaders.

Psychological preparation for death can include saying last goodbyes to loved ones, voicing regrets and apologizing. However, a diagnosis of COVID can limit one’s ability to properly prepare for their death, and die peacefully, comfortably and with dignity.

“Part of that preparation (with a COVID patient) was preparing people for the reality that death was going to be uncomfortable. The other element of being prepared is giving people the opportunity to say what’s important to them. To the extent that they could, even if it’s only through technology,” said Carpenter.

“It’s a really challenging time for families,” said Doctor Candice Booth, a Clayton parent and Emergency Medicine Physician at Missouri Baptist Hospital, “I’ve had some times where I realized someone was at the end of their life and made special arrangements to get family members gowned up and in the room, because I felt it was really important to say goodbyes. But in some cases, family members were too scared to come in, so we made other arrangements, setting up a Zoom call.”

Technology such as Zoom and FaceTime has become crucial in end of life care, connecting families kept apart by social distancing practices.

People had various reactions to pandemic deaths, with some becoming more open and willing to talk about and prepare for deaths. While others became more anxious, fearful and distressed surrounding the pandemic and the increased potential for infection and death. Witnessing an uncomfortable or painful death of a loved one also impacts family members in their grieving process.

“When people witness a difficult, complicated or prolonged death, it puts them at risk for an extreme or elongated grief reaction. Witnessing a poor quality death of someone that you care about is a bad thing for the people who are left behind,” said Carpenter.

One such type of an extreme grief reaction is known as prolonged grief disorder. According to the Washington Post, prolonged grief disorder is characterized by daily intense yearning for the dead, identity confusion, disbelief, emotional pain or numbness and intense loneliness, at least one year after the person’s death. One in ten people who have lost a loved one will be affected by PGD. This disorder was recently added to the DSM, the diagnosis manual for the American Psychiatric Association. Witnessing a sudden or traumatic death puts one at greater risk for developing PGD.

Ways to prevent an extreme grief reaction such as PGD include taking advantage of provided supports, such as bereavement support provided by hospice.

Witnessing a poor quality death also affects the staff who cared for the person. The pandemic has shone a light on the plight of nurses, doctors, housekeeping staff, social workers, health aides and other workers who care for dying patients. “We’ve learned (during the pandemic) how to take care of really sick people. We’ve also learned the importance of caring for the doctors, nurses, chaplains, social workers and other people who are doing the work. We need to cherish them, support them, make sure they’re well paid and have plenty of time off,” said Carpenter.

“I don’t think you ever become numb to it. Each one still affects you personally, seeing the patient and the family,” said Booth. Staff in the ICU can have different experiences, as they can spend days or weeks treating patients and getting to know them and their families prior to their deaths. But staff in Emergency Departments deal with the initial shock for families of patients who die immediately or those who come in very ill.

Particularly at the start of the pandemic, there was also a lot of fear among hospital staff members. They had to put themselves and their families at risk of death from a relatively unknown virus on a daily basis.

The Epstein family contracted COVID in December of 2020. Their previous experience with the Kopmans impacted their emotional responses to the virus. “When we were diagnosed, I think there was a lot of fear. When Margot heard that both her mom and dad and her had COVID, there was a lot of anxiety. Our only prior experience was with our neighbors and their tragic outcome,” said Epstein.

“It’s definitely been difficult. But I’m very thankful for our staff,” said Booth, “Everyone’s kind of had their moments where you need to lean on somebody and we’ve all been there for each other. Many hospitals, including Missouri Baptist have offered mental health support and resources for their staff during the pandemic.

“Community is a big part of you not feeling isolated. When we had COVID, all of our friends said they would get us anything we needed, go to the store for us. Even if you can’t see anyone, they just leave things on your doorstep,” said Epstein.

One day as she arrived at work, Booth noticed hundreds of pinwheels scattered about the lawn at Missouri Baptist Hospital, to honor all the patients that had been affected by COVID. “It just kind of gave you that mental image of how many people have been affected by this,” said Booth.

“I really wonder if the younger generation will carry the COVID pandemic with them, the way that older people have carried the polio epidemic and other things like that. Will it be a marker, an important milestone in their lives? A big life event that they’ll talk to their kids and grandkids about when they get older?” said Carpenter.