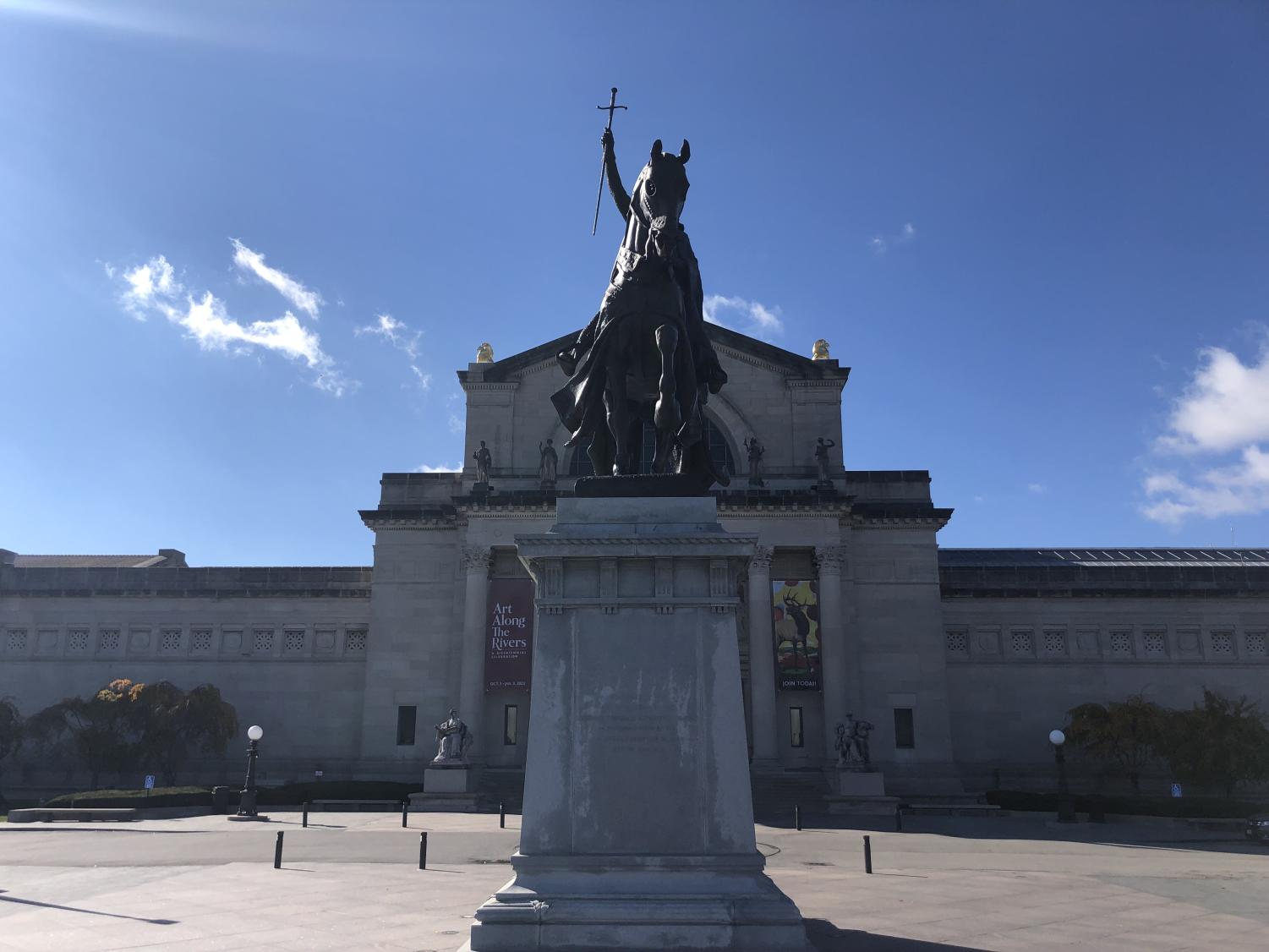 Part 1: The History of Monuments of St. Louis

St. Louis may be well known for the Cardinals, Forest Park, or even gooey butter cake, but no one can deny the fact that within the community that lies behind the Arch, there are endless monuments and memorials of substantial historical significance. These monuments have and continue to impact our city, and the future it holds.
Monuments of great historical impact tell us about not just the importance of what is being depicted, but also about what our city and society valued in the past, and what we will continue to admire and value today. 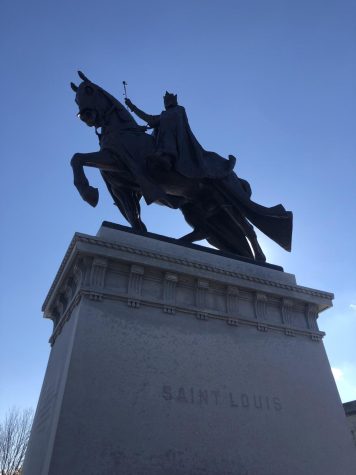 Apotheosis of St. Louis
One of the great symbols of St. Louis is the Apotheosis of St. Louis, an ornate bronze statue depicting King Louis IX of France, lying at the top of Art Hill in Forest Park.
The statue was created by sculptor Charles Henry Niehaus and it was donated to Forest Park by the Louisiana Purchase Expedition Company in October 1906.
“This statue is more [representative of] the symbolic success and power of St. Louis as a city, then it is Louis the IX,” said David Glossenger, who teaches AP Economics and History of St. Louis at CHS.
This statue doesn’t just display the memory of the 1904 World’s Fair, or the importance of Louis the IX as the city’s namesake, it also has caused some controversy, criticism and protests over the recent years — even as early as the summer of 2020 — calling for the removal of the statue.
Groups protesting — though small — may believe that this statue symbolizes white supremacy. Glossenger, however, stated, “The notion of white supremacy in a racialized, classist system in the United States is pretty far removed from King Louis IX.”
As many figures in history have, Louis IX definitely did some bad things by 21st century standards as a white, christian, male king in the 1200’s, and we need to be aware of the symbol this statue communicates — in other people’s eyes as well as ours.
This statue, to many St. Louisans, symbolizes a “thriving St. Louis, and pinnacle to St. Louis’s power and success while to others, they read a little more deep into the meaning behind it, a little more than what the people that put it up actually intended for,” said Glossenger.
Though this statue is definitely not as controversial as others, it should be taken into consideration what this statue means and symbolizes for all groups of people. Even as a pinnacle monument of St. Louis. 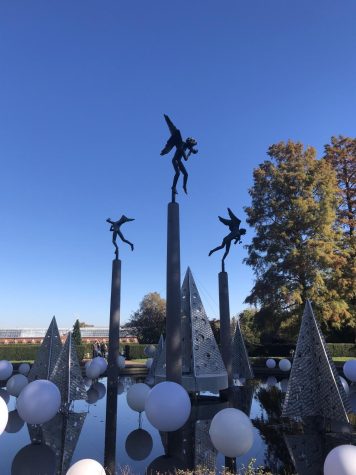 “Three Flying Angels”
When you walk into the Missouri Botanical Garden in Tower Grove, three rather striking statues catch your eye. Front and center, in the entrance of the garden, lay 3 pillars, with one statue atop each of them, a bronze angel playing a musical instrument. Resting in a lily pad-spotted pond, and surrounded by the floral and natural feel of the Garden, these statues are the perfect centerpiece for this beautiful location.
The Garden’s sculpture collection began in 1883, and it has continued to prosper and will always remain as one of the key places in St. Louis. Missouri Botanical Garden’s website stated, “The Saint Louis Art Museum, Washington University Gallery of Art, and private collectors lent a broad representation of sculpture to the Garden, including 30 pieces in 1965 and 35 pieces in 1972.”
These statues, along with many others in the entrance of the gardens, were commissioned by Botanical Garden founder, Henry Shaw, and created by Carl Milles.
Two photographers at the gardens, one of whom had been shooting the gardens for 15 years, had a lot to say about the statues in the entrance. “A lot of [the statues here] are pretty wistful, and I like the grace of a lot of them,” said one of the photographers. “ It’s like there’s no theme whether it’s couples of males, or females, it’s almost like a ‘Pans Garden’ type of thing.”
The other photographer said, “When I’m shooting the statues here, I kind of feel like [I’m being] transported into somewhere else. Which I think is the main reason why I come here, especially in the spring and fall time.”
Whether or not you’re a skilled photographer, historian, or local community member, these gardens and statues symbolize an idea of beauty and historic value to St. Louis.

“Rather than fixating on the particulars of the individual, it’s more important for us to think about what are the ideas, and what are the qualities that we want to memorialize.” ” 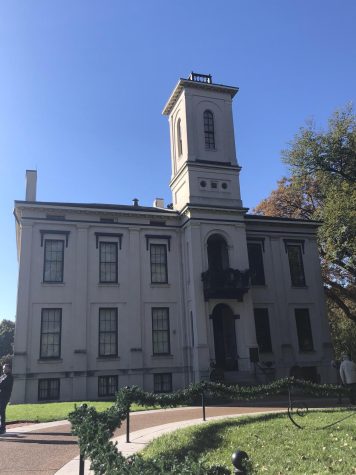 Tower Grove House
If you decide to walk a little further in the gardens, and take a left from the Three Flying Angels statues and continue to walk along the blooming trail, you’ll come across an old-fashioned white, 9,000 square foot historic house. Trees surround the right of the estate; it is the perfect place to visit to truly feel that you’ve stepped back into time. This is Henry Shaw’s house, located in Tower Grove.
Today, staff and volunteers encourage visitors to take a step back in time to learn more about the people who made the Garden grow.” The house is located in the Victorian District of the Garden, and served as Henry Shaw’s house until he died in 1889.
According to the Missouri Botanical Garden, This house is in great condition, considering the Garden’s first appointed director, Dr. William Trelease lived in the house after Shaw’s death until 1912. The house would later serve as a classroom for “The Shaw’s School of Gardeners,” until 1953. From then until today, it has been used as a historic house museum, achieving what the Botanical Garden’s website describes as “beginning its legacy of sharing the Garden’s history and offering a glimpse back in time.”
The Garden’s website stands corrected, because as you walk through his gardens today, you do truly feel as though you’ve stepped back into time. 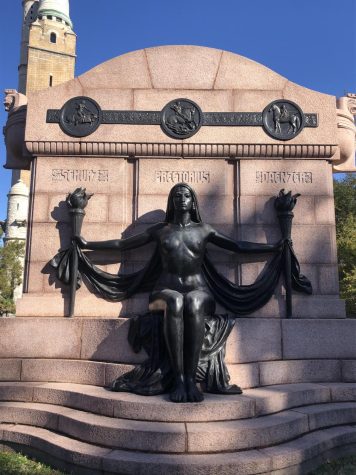 The Naked Truth
Located in the Compton Hill Reservoir Park, a striking memorial lies at the foot of the reservoir’s water tower. This bronze statue depicts a nude woman holding two torches with linens draped around her, sitting at the foot of a memorial for German-American influence in St. Louis. The torches she holds in her hands symbolize the “enlightenment of the German and American alliances,” according to the St. Louis City website.
This statue serves as a memorial as well as a symbol of truth; three journalists were commemorated in the statue: Dr. Emil Preetorious, Carl Schurz, and Carl Daenzer. The monument was shortly taken down after being put up in 1914, because only seven weeks later after it was put up, World War One began. With the country in a sweep of German hate, this statue was forgotten by St. Louisans.
The Water Tower and Park Preservation Society rededicated the statue, exactly 100 years later in 2014. This statue may have been forgotten by World War One, but it was initially created for efforts made in the Civil War, by German-Americans. “In St. Louis, the Germans were an enormous part of the Union forces that kept St. Louis in the state of Missouri, and a part of the United States,” said Glossenger. “Without the German-American community in St. Louis, there would’ve been a very different war. And it’s possible that St. Louis and the state of Missouri would’ve fallen to the Confederacy pretty early in the war, and that the war would’ve turned out quite differently. Maybe even to the loss of the North.”
The statue shows the historical value of the German-American alliance in the Civil War, which continues to impact St. Louis to this day.
Glossenger said, “More broadly this statue was focused on the contributions to our community, and it comes out of a time of reckoning, of what we think about the past 50-60 years, and how we tell this story of the Civil war to future generations.”
The German-American alliance and influence on St. Louis in the Civil war displayed with this memorial, helps commemorate the historical value of this war on St. Louis, in a way that — controversial or not — helps preserve a moment of time in our history. 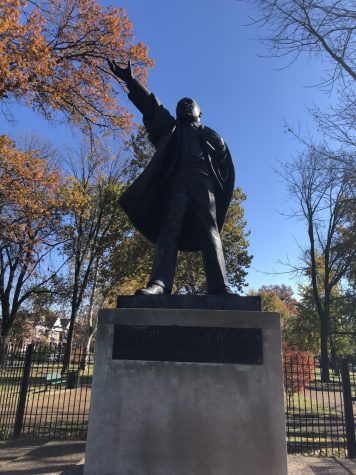 Martin Luther King Jr. statue in Fountain Park
Located in Fountain Park, and created by sculptor Rudolph Torrini in 1977, this bronze statue was built in Florence, Italy. The St. Louis American described the statue’s pose as “heroic, with the subject’s right arm outstretched and his face expressing concentrated equanimity.”
King was a lead figure in the Civil Rights Movement across America, and though he spoke in St. Louis a few times, we are left to wonder why his specific image was chosen for representation.
The history of St. Louis came from many lows before it reached greater heights. Glossenger stated, “This statue in particular in Fountain Park celebrates the achievement of political empowerment in St Louis, in ways that we hadn’t really seen before.”
Similarly, the location in Fountain Park also may seem random, though there is a history with this specific location. This setting for King, according to the St. Louis American, “enshrines the changes in housing equality wrought in St. Louis’ west end neighborhoods in King’s lifetime.”
In the mid 19th century, Fountain Park was developed as a middle-class suburb, on the edge of Central West End. Segregation occured in real estate until 1948, when a ruling was issued by the Supreme Court in Shelly v. Kramer, to drop racially-based housing restrictions. This ruling brought more African-American population into the community, providing for a more welcoming and free feeling to the area.
Glossenger said, “The King statue in Fountain park is very symbolic of progress we’ve made, but it’s also symbolic of progress that needs to happen.” And, especially considering the injustice of the history of the area, the symbolism of the statue for the community couldn’t be more fitting, and hopeful for the future.

To Conclude…
There is a lot of symbolism and meaning behind statues and as a city, we need to fixate on the ideas, qualities and the values we want to memorialize, rather than the personal achievements of an individual.
Whether our city’s historical significance is located in Forest Park, Tower Grove, Fountain Park, or at the foot of a water tower in the Compton Hill reservoir, we will always continue to show the values and the importance of what we’re memorializing in our city, and our society for the future.
There are many prosperous factors within these monuments, but also a good amount of work to be done, and efforts to be made, which will be further explored in the next chapter.
“In terms of going forward, I think if we understand what values people had, and what they admired back in the day, I think it allows us to understand, maybe a little bit better, where we can go from there.” said Glossenger. “We have to know where we’ve been, to know where we’re going.” 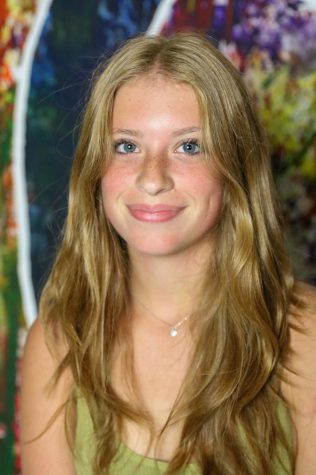 Charlie (Charlotte) Meyers is a freshman, and a reporter for The Globe this year. She has never previously been on a school newspaper, so this year is her first year writing for...