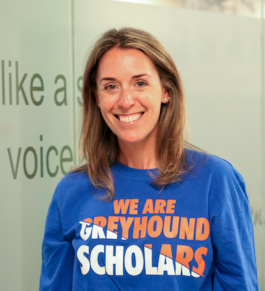 After moving around different colleges, she began working at Loyola University Chicago. What happened next is, as Johnson described, a typical St. Louis story. “ I moved to Chicago and then after I had a child, I moved back to raise my family here.”

“Public service is where my heart is.” For Katy-Jane Johnson, public service is at the center of everything she does. Her passion for public service began while interning at The White House when she studied political science at the nearby The George Washington University. She soon discovered that “You can have a job and make the world a better place”. This discovery became a mantra for the remainder of Johnson’s career.

After her stint at The White House, she entered corporate America and realized after only nine months, “This wasn’t for me. I can’t get up every day and work somewhere where my whole motivation is to make rich people richer.” With guidance from her mom, a former college counselor at Ladue High School, she became an undergraduate admissions counselor.

After moving around different colleges, she began working at Loyola University Chicago. What happened next is, as Johnson described, a typical St. Louis story. “ I moved to Chicago and then after I had a child, I moved back to raise my family here.”

After moving back to Saint Louis, she got a job at U-City High School as a guidance counselor. “I loved my time at U city. It was it’s a great school. It’s a great community.” While there she helped pilot the early college program, which she views as one of the highlights of her career “That’s what I had been doing for the last four years. It’s now much more robust this year with around twenty seniors, and that is kind of awesome.”

The early college program is a partnership that exists between many St. Louis area school districts and St. Louis Community College. Students enrolled in the program can earn their associate’s degree while still in high school. Clayton, along with U-City, is a member school in this program. However, some differences exist between the two schools. “At U-City, they pay for everything. So it’s very accessible to all the students. The program also changed the lives of the kids. Some graduates were able to go to college for only two years after the program, others earned full-ride scholarships or they may have had to pay only $1,000 out of pocket.”