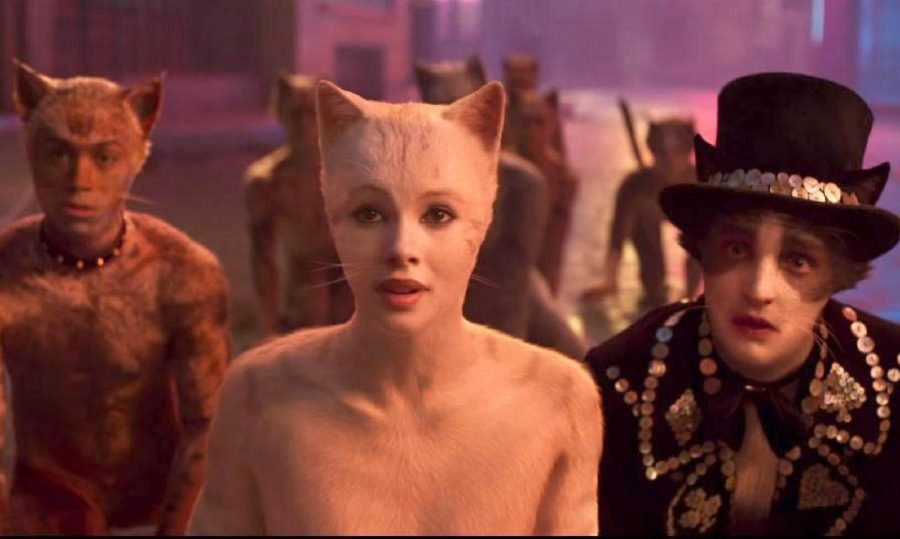 A review of the 2019 film adaptation of award-winning '80s musical "Cats."

What would you do with 93 million dollars? Consider the possibilities! You could buy 2,380 Tesla Cybertrucks. You could ride the Loop Trolley 6.2 million times. Or, like the creators of “Cats,” you could make a movie adaptation to fuel nightmares.With the same sense of horrified excitement with which I watched the live-action “Cat in the Hat” movie and initial 2019 “Sonic” trailer, I’d wanted to see the “Cats” movie ever since I saw the trailer. However, it wasn’t until “Cats” had been showing in theatres for a while that I actually watched it because convincing someone to see it with me was quite a difficult task.

“Cats” will test your range of emotions, but beneath all other feelings lies a continuous sense of discomfort. You may feel the urge to sing, to scream and to sob. You may feel a growing sense of existential dread.

Now, I’ve never seen the original “Cats” musical, but I say with some confidence that the 2019 adaptation was not what Andrew Lloyd Webber would’ve had in mind.

For those unfamiliar with the film, think of the cats in Medieval paintings competing in a talent show, but add in tap-dancing, a magician, a pirate, “Avengers: Infinity War,” top actors from around the world and the worst possible cat-related puns imaginable. That’s “Cats.”

As far as I could tell, “Cats” is about Victoria, an abandoned cat who meets the cats of the Jellicle tribe. The Jellicles are competing to be selected as the Jellicle Choice, which gives them the chance to go to the Heaviside Layer and be reborn. However, one of the cats, Macavity, Thanos-snaps his competitors away in an attempt to secure his win by default.

I didn’t understand anything about the plot until at least half an hour into the movie. The first half felt incredibly slow and painful to watch, consisting of only back-to-back songs about each of the cats. This does provide an introduction to the characters but contributes almost nothing to the plot. Throughout the movie, Victoria seems to be attracted to several of the cats she encounters, but none of these relationships are ever established– they only go as far as rubbing their necks together. Although this seems confusing and pointless, it’s probably for the best because one of the most disturbing parts of “Cats” is when the cats touch each other’s legs.

Plot aside, the music isn’t bad. In fact, if you close your eyes and just listen to the soundtrack without looking at the cats, the movie is fine.

The problem with “Cats” is the cats.”

The problem with “Cats” is the cats.

The characters were cat-like but looked too human for my brain to think of them as cats. They simultaneously looked too cat-like to be perceived as humans. This is the primary source of the aforementioned constantly underlying discomfort. All of the cats had human hands, feet, and noses. Some of the cats were distinctly worse than others because some cats, particularly Macavity, appeared much more naked-looking than others.

This does raise a few questions. Real cats generally don’t wear clothes. Some of the characters in “Cats” did. But of all the clothes to wear, why would cats be wearing fur coats? Why is one of the cats wearing extremely high-waisted pants and nothing else? Why does one of the cats wear an extra skinsuit on top of her pre-existing fur and dress?

The other animals in “Cats” are actually worse. There are mice that have the faces of human children and some cockroaches, also with human faces, that are eaten. One scene has a dog, but fortunately, it’s never shown. Perhaps if I had a greater sense of morbid curiosity, this would be a disappointment rather than a relief.

I expected to be amused by the visuals, but as those 109 minutes passed slowly by, the amusement faded, the unsettled feeling grew, as did my regret over the $10 I spent for a ticket.

The execution of this adaptation is genuinely disappointing. “Cats” could have been a creative animation with exploratory art styles in a fitting, yet innovative reimagination of a classic musical. Instead, the CGI made it the trainwreck that it is (Skimbleshanks the Railway Cat would be ashamed).

I cannot think of anyone that I imagine would enjoy this movie, but I highly recommend everyone to watch it.