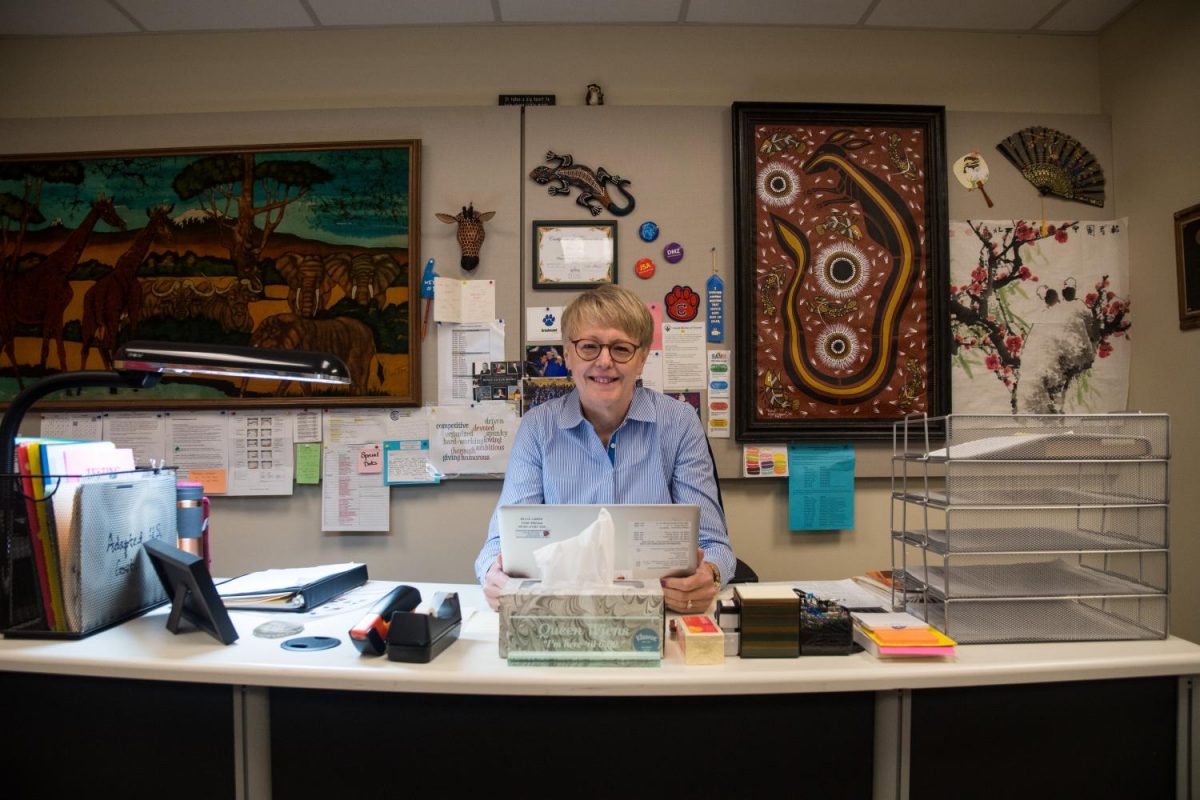 Photo of Debra Wiens, who used to be a history teacher at CHS, by Michael Melinger.

An update on the lives of Syrian refugees in St. Louis.

Debra Wiens:
It was Thanksgiving Day 2016, and former CHS Current Issues teacher Debra Wiens had just put the finishing touches on a traditional home-cooked meal when her daughter, a college student in a social work program, saw the spread of food on the dining room table.
“[My daughter] spent the summer before that in Germany with Syrian refugees, making them aware of sex trafficking and the dangers and how to avoid it,” Wiens said. “So she became friends with a lot of the young Syrian women. And she came home for Thanksgiving, and she said, ‘Mom, you have enough food here for 20 more people, where are the Syrian refugees?’ She said that there were a lot of Syrian refugees in St. Louis, and that she was going to go get them and bring them here for Thanksgiving. This was two hours before the meal. So we had an hour-long argument, and I took her car keys away.”
That day, Wiens and her family ate alone. However, she made a promise to her daughter and to herself that she would get to know some Syrian refugees and have them over for Christmas.
Years later, Wiens would once again find herself sitting down to a celebratory meal with family. This time, though, that family would be the wife and children of one of her closest Syrian friends, and the celebration would not be for a holiday, but rather for the safe return of their father from Turkey.
Wiens met Ebrahim Almalla and his family after her initial commitment to help make Syrian refugees feel more at home in St. Louis. This would often entail searching for better housing, schools, neighborhoods and jobs that would ease the jarring transition to life in the United States. In this way, she often became the greatest link between their home life and the outside world. As she helped his family adjust, Wiens and Almalla became fast friends. He even came to her first to ask her opinion on a trip in the summer of 2019 to Turkey to visit his relatives.
She was strongly against the idea.
“He wanted to go back and see his mom and brother, nieces, nephews,” Wiens said. “I kept telling him not to go because it wasn’t safe, I was reading in the news that it wasn’t safe. Even my American friends didn’t believe me that it wasn’t safe, but I kept reading about the problem growing worse. I told him that it wasn’t a good time to go and that he didn’t have the money to go. Against my wishes, he went. During his trip I was in Shanghai and Seoul. As soon as he arrived in Istanbul, he realized that what I had been telling him was true.”
The Turkish government had begun deporting Syrians back to Syria. Almalla’s fear of capture triggered PTSD symptoms that resulted from his proximity to the Syrian civil war. This prevented him from eating or sleeping, and sparked overwhelming anxiety. When he was able to call his wife, who remained in the US with their children, he had a single request: that he could speak to Wiens.
As soon as Wiens called him back, she could hear his distress. He was terrified that, if he stayed in Turkey any longer, he would be forced back into Syria and never see his family again. He wanted Wiens to fly to Istanbul and help him return safely to the US early. Overpowered by distressing physical and emotional symptoms, boarding an aircraft felt impossible. However, Wiens agreed to call him as he boarded his flight, and again when he reached his connector in Chicago. Each time, she convinced him to get on the plane.
Finally, he touched down at Lambert International Airport, where Wiens and his family were waiting for him. Upon their arrival at his home, he waited for everyone else to go inside.
“And he stood there, outside of his house, and he looked at me, and he said, ‘Lady Debra, please believe me, you are my family now. My family in Turkey, yes they are my family, but everyone is different after the war. You are my family. If we do not have you, we will die in this country. Please always be my friend,’” Wiens said.
Today, Wiens is retired, and spends time teaching Muslim women to speak and write English. She believes that this is one of the most integral parts of transitioning to life in the US, as proficient English is necessary to gain citizenship. However, perhaps most importantly, what these families need is someone to look out for them.
“[The Syrian refugees] need friends,” Wiens said. “And I realize what that friendship means for their family.”

[The Syrian refugees] need friends. And I realize what that friendship means for their family”

The Almalla Family:
Ebrahim and Hadeel and their children Rana, Reem and Muhammed are as integral to the St. Louis community as the community is to them. With them, they bring vitality, wisdom, and hope. They see the world as it is rather than as many want to see it.
Here in the United States, the violence in Syria seems more than a world away. However, St. Louis is host to many Syrian refugees who have experienced firsthand the destruction that has occurred in Syria. While they are physically separated from the war, families like the Alamallas still have relatives in Syria and surrounding countries that serve as a permanent tether to events that continue to take place. These families often have a difficult time adjusting to a new culture while simultaneously learning English and working to become citizens.
For the Almalla family, escaping the conflict in Syria was a long process. Before eventually making their way to St.Louis, they spent three years living in Egypt. In 2014, they nearly escaped across the Mediterranean, but Hadeel was pregnant with Muhammed and they felt the journey too unsafe in the rickety boat that was supposed to take them.
Rana, the eldest daughter was so affected by the trauma of the war that she had not been speaking; the family was growing very concerned. The first time that Wiens met the family was the first time Rana talked. The parents cried from the joy and relief they felt.
During this time in Egypt, it was unsafe for any of the children to attend school, yet, through hard work and a love of learning, they are all in the grade that corresponds with their age today. Not only this, but Rana is involved in her student council; Reem, their second eldest daughter, plays team sports at school; Muhammed, their youngest son, is a normal, energetic 4-year-old who spends his time bouncing around and ignoring his parents wishes for him to give back their cell phones. Sometimes, it is hard to imagine that they used to be caught in the middle of a civil war in Syria. That was a lifetime ago.
After moving from Syria to Egypt, the Almallas were sent to St. Louis by the United Nations to settle in Holly Hills, a neighborhood in south St. Louis city. This area turned out to be less than ideal. Additionally, when Ebrahim began his painting company, he and Hadeel lost their health insurance coverage because Missouri chose not to expand its Medicaid program.
However, as the Almallas can attest, life in St. Louis does get better.
With help from Wiens, the family was able to move into a nicer neighborhood with access to good schools and a friendly community. As of now, everyone in the family except for Hadeel has healthcare. However, only the children are on Medicaid. Ebrahim is connected to a program through Barnes-Jewish Hospitals which allows him free healthcare, but only at BJC facilities.
Both Hadeel and Ebrahim work to support their family. Hadeel taught herself how to crochet when she moved to St. Louis and she now makes hats and ear-warmers to sell at local bazaars and markets. Additionally, she caters parties for up to 200 people and cooks all the food by herself.
Ebrahim works in the field of construction and also acts as a handyman for Wiens and other families around St. Louis. He has been hired to work in almost every county in the area. Unfortunately, his health was poor in the past, which prevented him from working as much as he would have liked, but he is working on improving it every day.
The whole family has a very bright future ahead of them. Rana, now a high school freshman, hopes to continue her education past high school and work in the medical care field. She is already exceeding the expectations of teachers and peers. After only one semester in the Affton School District, she won the award for outstanding student not only for her grades, but also for helping the principal with Arabic translation. Rana continues to apply herself, both in school and alongside her mother making jewelry and candles, to focus on her future education and goals.
Both parents are becoming increasingly active in their St. Louis community, and they have nothing but words of praise for it. According to them, the community has been nothing but welcoming, and they truly feel that they have found a home here.
The Almallas aim to gain citizenship within the next few years, because they love the United States and all that it has done for them. They also hope that someday they may be able to bring their family in Syria over with them.
“We love America; this is our home now,” Ebrahim said. “I am never leaving again.” 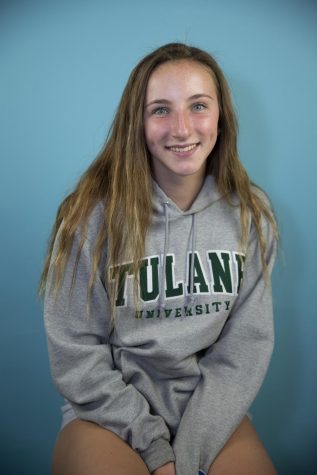 Bridget is a senior, and this is her third year on Globe. Besides newspaper, Bridget also does cross country, diving, and lacrosse. Her favorite subjects are Math and English because... 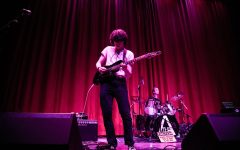