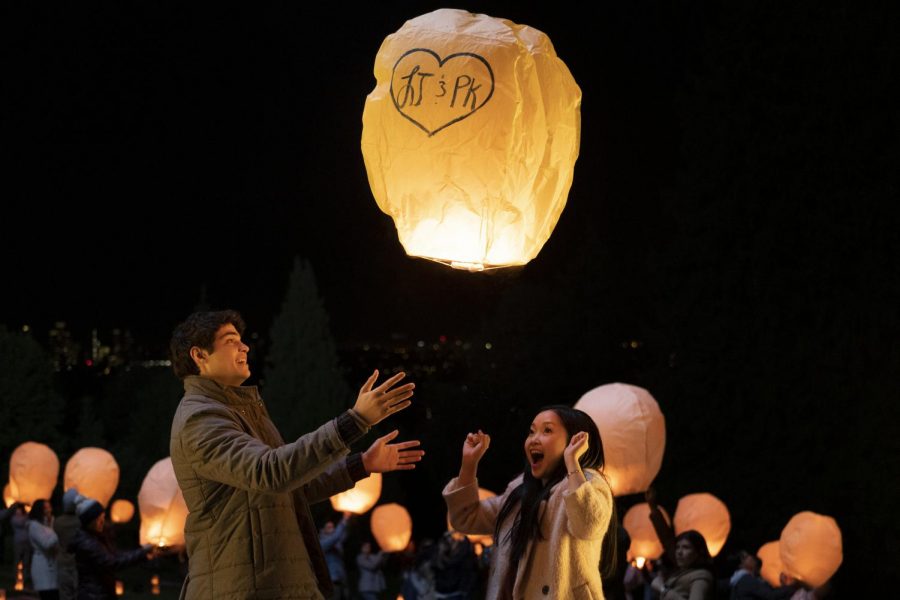 Noah Centineo as Peter and Lana Condor as Lara Jean in “P.S. I Still Love You.”

P.S. I Still Love You

I Really Disliked "To All the Boys: P.S. I Still Love You," and Here is Why: A review of the second Netflix adaptation for Jenny Han's book series

It’s Feb. 12, 2020. Three days ago, Bong Joon-ho’s “Parasite” won four Oscars. Today, “P.S. I Still Love You,” which features a half-Korean protagonist, comes out on Netflix. “What a wild week to be Korean!” proclaims one Twitter user. It is too bad that Lana Condor, Janel Parrish, Anna Cathcart and Julie Tao, who play every speaking Korean role in the film, cannot relate, as none of them are Korean.

“P.S. I Still Love You,” sequel to “To All the Boys I’ve Loved Before” and based on the book trilogy by Jenny Han, picks up where the first movie ended, with Lara Jean in a newly real relationship with Peter. However, Genevieve, Lara Jean’s ex-best friend, who is ever-so-coincidentally also Peter’s ex-girlfriend, as well as John Ambrose, another recipient of Lara Jean’s love letters, may get in the way.

Although I liked “P.S. I Still Love You” the best out of the three books, I found its movie immensely frustrating to watch. The plot of the movie generally didn’t stray too far from that of the book, yet some of the book’s strongest aspects, those that gave characters their complexity and the book its charm, were excluded. The movie left out the game of assassin, for example, which showed the personalities of the characters, as well as the lasting ties between them and how their relationships changed over time. With the exclusion and underdevelopment of this and other plot points, such as the USO party, what remained was an almost exclusive focus on drama, jealousy and which characters were dating.

The removal of the quirks of the characters left them as stereotypical high school tropes: Chris as the tough and edgy best friend identifiable by her dark eyeshadow and Genevieve as the pretty, blonde ex-friend/girlfriend and mean girl who serves primarily as a source for jealousy. I was especially sad that Lara Jean and Genevieve’s relationship was based on fighting over a boy, rather than an exploration of the ties that remained between them even after their friendship fell apart. (I also didn’t understand why they would fight over Peter because I personally found him creepy and his relationship with Lara Jean cringey.)

Lara Jean and her sisters are half-Korean and half-white, a background that differed from those of their actors. Now, you say, the actors might not be Korean, but they were obviously cast for a reason! Some of them are part-East Asian, so that’s probably close enough. It’s because they’re playing siblings and they need to look alike! They do not look alike. Maybe it’s because they’re such good fits for their characters? Look, Janel Parrish, who plays a high school student in the first movie, is 30 years old. Yay, representation!

The characters Lucas and John, both of whom are white in the books, are played by Trezzo Mahoro and Jordan Fisher in the movies, who are Black and Black mixed-race, respectively. Despite the added representation to the screen, these changes were clearly an appeal for Diversity™ points, as Jordan Burtchett, the white actor who played John Ambrose in the first movie, was replaced in the second by Jordan Fisher. They have the same first name — who’ll even notice? Additionally, Trevor, a side character who is also a high school student, was also portrayed by a half-Asian and half-white actor, despite that his race was not specified in the books, which I appreciated. The actor, however, is 29 years old.

Representation doesn’t have to be revolutionary”

While the movies pride themselves on being representative, the display of culture is limited. The first film featured yogurt drinks, which are popular in Korea but actually originated in Japan. The second movie plays 30 seconds of K-pop group Blackpink’s song “Kill This Love” cut awkwardly in order to minimize the amount of Korean heard. In one scene, Lara Jean and her sister wear hanbok, traditional Korean dress, but the style and color are atypical and appear costume-like.

Representation doesn’t have to be revolutionary. In fact, casual representation is valuable simply because people can see aspects of their ordinary lives reflected on-screen. I also understand that since Lara Jean’s mom, who was Korean, passed away, Korean culture wouldn’t be prominently featured in the movie. However, as a bona fide half-Korean myself, I was genuinely disappointed by its execution.

A third film, based on “Always and Forever, Lara Jean,” is in the works with the same director, Michael Fimognari. In my opinion, the third book was the worst, so though I’m willing to give its movie a shot, my expectations are low. Plus, based on a recent tweet from Jenny Han, a fourth book and movie adaptation might be in our future. Here’s to hoping they’re better?